Edward F. “Joe” Redish, a nuclear theorist who became a globally recognized expert in physics education research, retired on June 30 after 52 years in the Department of Physics.

Upon earning his Ph.D. at MIT in 1968, Redish came to UMD on a fellowship in nuclear theory. He was hired as an assistant professor in 1970, continuing his work on the theory of reactions and the quantum few-body problem.

Over the next dozen years, technological advances made computers vastly more accessible, and Redish recognized their enormous potential for students grappling with difficult concepts and calculations.  Intending to develop useful tools, he accepted the position of department chair in 1982, and quickly launched the Maryland University Project in Physics and Educational Technology (M.U.P.P.E.T.). Among the results was M.U.P.P.E.T. Utilities, a software package with applications for graphing, simple animations and data management that allowed students to use computing for complex physics problems.

M.U.P.P.E.T. inspired broad interest in incorporating computing into physics instruction. The experience also heightened Redish’s interest in physics education. In 1992, he took a sabbatical at the University of Washington with Dr. Lillian McDermott, a leader in the field, and upon his return launched the Maryland Physics Education Research Group.

In the 25 years since its creation, the UMD PERG has graduated 23 physics Ph.Ds. and trained several postdocs. Graduates include many tenured physics faculty, two American Physical Society (APS) fellows, and a president of the American Association of Physics Teachers (AAPT).

Among the group’s notable efforts was the Maryland Physics Expectations Survey (MPEX), which revealed a chasm between what students and professors thought was happening in introductory physics courses. This paper led to the development of similar surveys in physics and in other fields. Redish and the PERG became leaders in the development of a theoretical framework for Physics Education Research and in developing analytic tools for cognitive modeling of student thinking

In 2003, as part of The Physics Suite, a project unifying multiple active-learning materials with a new textbook, Redish wrote a guide to physics teaching, Teaching Physics with the Physics Suite. A December 2019 review in the UK's Institute of Physics’ education newsletter called it "perhaps the single best book available for a teacher to read who wants to get a deeper insight into teaching and learning in physics." It has been translated into Japanese and Farsi.

In response to his research findings, Redish overhauled Physics 121/122 (required for life science students) to focus on the development of higher-order scientific thinking skills, reconsidering each component and better integrating the labs, tutorials and homework assignments. To provide a more interactive experience, he introduced interactive lecture demonstrations and clickers, which provided real-time feedback to the instructor on what students were absorbing.

In 2010, Redish received funding from the Howard Hughes Medical Institute for the National Experiment in Undergraduate Science Education (NEXUS) and created Physics 131/132. This sequence was designed for students planning careers in medicine and bioscience, who will better understand chemical and biological processes with a solid foundation in physics. It is a core element of the multi-university, multi-million dollar National Science Foundation (NSF) project, The Living Physics Portal, a national web resource for organizing, evaluating, and sharing materials for physics classes for life science students.

His more than 100 published papers include three major articles in Physics Today, two of which were cover articles.. He was awarded $7.5 million in federal funding for Physics Education Research.

Redish is a UMD Distinguished Scholar-Teacher and a Fellow of both the American Association for the Advancement of Science and the APS.  He has received a broad range of accolades, including the NSF Director's Distinguished Teaching Scholar Award in 2005.

For 12 years, he was the U.S. representative to the International Union of Pure and Applied Physics Commission on Physics Education (C14), and received its Education Medal in 2012. He was awarded the AAPT Oersted and Millikan medals and the University System of Maryland Board of Regents Award for Teaching. In 2015, he received the APS Excellence in Physics Education Award, "For leadership in the use of computers in physics education, applying cognitive research to improve student learning and critical thinking skills, tailoring physics instruction for nonphysicists, and guiding the field of physics education research through a period of significant growth."

In 2017, more than 150 colleagues and advisees gathered to honor Redish on his 75th birthday.

In retirement, Redish plans to devote his time to writing papers, contributing materials to the Living Physics Portal, and continuing his research on student use of mathematics in physics. 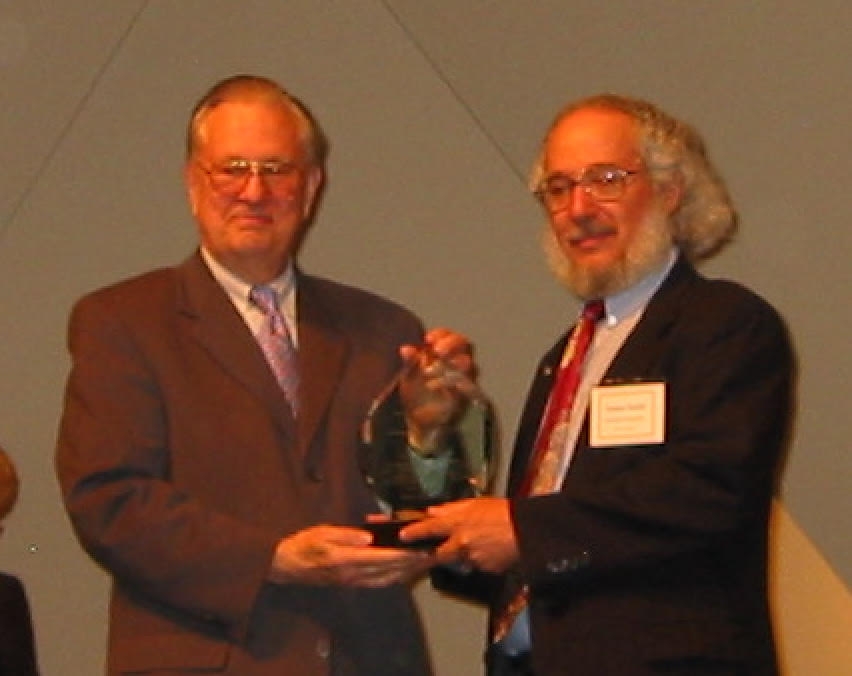 Redish was honored as a UMD Distinguished Scholar-Teacher in 2006.

Redish was an organizer of the Varenna Summer School/2003 Fermi symposium on Physics Education Research.

Redish with many collaborators and former students at his celebration in 2017.

Some fruits of his labors at UMD.