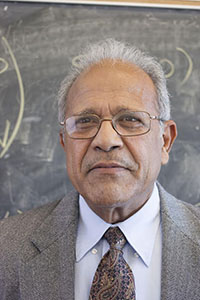 Rabi Mohapatra is renowned for his seminal contributions to elementary particle physics. Over the last five decades, his ideas have been critical in developing new directions, often inspiring new classes of experiments. He is the author of more than 400 published papers, which have been referenced more than 30,000 times. Professor Mohapatra has also played a leadership role within the particle physics community, mentoring younger scientists, writing important textbooks, and serving on committees that have charted the direction of the field.

He received his Ph.D. from the University of Rochester in 1969, under the guidance of Robert Marshak and Susumu Okubo. In his thesis he argued that the very small mass differences among kaon particles required the existence of one or more new particles with masses less than 4 GeV. This prediction was later spectacularly confirmed with the discovery of the charm quark with mass 1.5 GeV in 1974. He was a co-inventor of the Seesaw mechanism for understanding small neutrino masses, which he proposed in 1979.

Prof. Mohapatra had postdoctoral appointments at Stony Brook University and the University of Maryland. He is well-known for being one of the co-proponents of the left-right symmetric theories of weak interactions, proposed as a Maryland post-doc in 1974. He joined the City College of New York as an assistant professor that year, and returned to the University of Maryland as a full professor in 1983. He is an acknowledged leader in neutrino physics.

He is a Fellow of the American Physical Society, a member of the Indian Academy of Sciences, a recipient of the Alexander von Humboldt Prize and a University of Maryland Distinguished Scholar-Teacher. 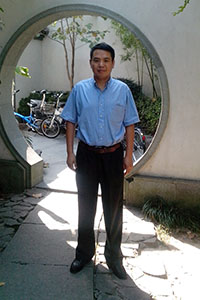 Xiangdong Ji has flourished in both theoretical Quantum Chromodynamics and experimental dark matter research. He received the American Physical Society's 2016 Herman Feshbach Prize in Theoretical Nuclear Physics "For pioneering work in developing tools to characterize the structure of the nucleon within QCD and for showing how its properties can be probed through experiments; this work not only illuminates the nucleon theoretically but also acts as a driver of experimental programs worldwide."

With visiting appointments at Shanghai Jiao Tong University and Peking University, he has built and led the PandaX experiment, a 125kg-liquid xenon detector in the China Jinping underground lab, searching for dark matter. A 550 kg detector, PandaX 2, has just produced the world's most sensitive limit on the Weakly Interacting Massive Particles.

Prof. Ji received his Ph.D. in 1987 from Drexel University, and then served as a postdoctoral researcher at the California Institute of Technology and as an assistant professor at the Massachusetts Institute of Technology before joining the University of Maryland in 1996. He received the Jefferson Science Associates' 2015 Outstanding Nuclear Physicist Award, the 2014 Alexander von Humboldt Prize and the 2004 Distinguished Overseas Young Scientist Award of the National Science Foundation of China. He is a Fellow of the American Physical Society.