Professor Emeritus James Robert “Bob” Anderson died on March 25, 2018 after a brief hospitalization. He was 85.

Prof. Anderson received his Ph.D. from Iowa State University and was recruited by John S. Toll to strengthen the Department’s efforts in solid state physics. He held an NSF postdoctoral fellowship at the Mond Laboratory of Cambridge University before joining UMD in 1964 as an assistant professor. During his long career, his research spanned several topics in experimental condensed matter physics. He made highly-cited contributions to superconducting quantum computing since the late 1990s, and to diluted magnetic semiconductors from 1984 until the current decade. He also researched Fermi surfaces in many materials—mostly via experiment, but doing band-structure theory—from his thesis in 1962 through at least the 1980s. He enjoyed visiting appointments at the Institute for Materials Research, Sendai, Japan; Kuwait University; the Institute of Physics of the Polish Academy of Sciences and the Institute of High Pressure Physics in Moscow, among others.

He was a member of the Center for Nanophysics and Advanced Materials and a fellow of the Joint Quantum Institute, and maintained research connections with the Laboratory for Physical Sciences. He retired from the University in 2014, but still spent much of his time in the Physics Department, and was a faithful attendee of its colloquia and seminars. He was an avid bicyclist, a devoted UMD sports enthusiast and a true fan of gentle jokes and puns.

Prof. Anderson’s memorial service has not yet been scheduled. 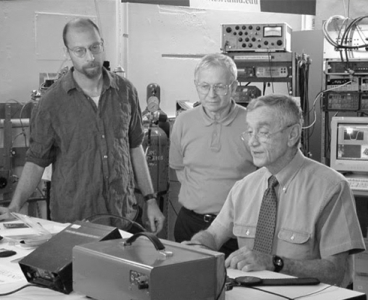