Manuel Franco Sevilla has joined the Department of Physics as an assistant professor. He recently completed a postdoctoral appointment at the University of California at Santa Barbara.

Franco Sevilla received his Ph.D. in experimental particle physics at Stanford University, working on the BaBar experiment at the SLAC National Accelerator Laboratory. At SLAC he did seminal work on lepton universality, a fundamental assumption within the Standard Model (SM) of particle physics that states that the interactions of all charged leptons differ only because of their different masses. Franco Sevilla’s work challenges this assumption and helped launch a new area of studies in the experimental programs at the CERN Large Hadron Collider (LHC) and B factories, stimulating many possible interpretations based on physics beyond the SM.

As a postdoctoral researcher, Dr. Franco Sevilla moved to the Compact Muon Solenoid (CMS) experiment at the LHC, where he made major contributions both to the development of particle detector instruments as well as to the physics analysis of the data in the area of Supersymmetry. In 2014 he was recognized with a CMS Achievement Award for “outstanding design and construction of the 72 Optical Data MotherBoards (ODMB) that control and read out” the complex electronics needed in this part of the operation, and during 2016-2018 he was appointed Coordinator of the CMS Cathode Strip Chambers (CSCs) upgrade for the high luminosity LHC and Deputy Project Manager of the CSC group.

He now joins the LHCb experiment at CERN and looks forward to continuing his research on lepton universality violation and engaging students in the study of today’s open questions in fundamental physics. Additionally, he will contribute to the development of the electronics for a new tracker detector to be installed in LHCb in 2020. 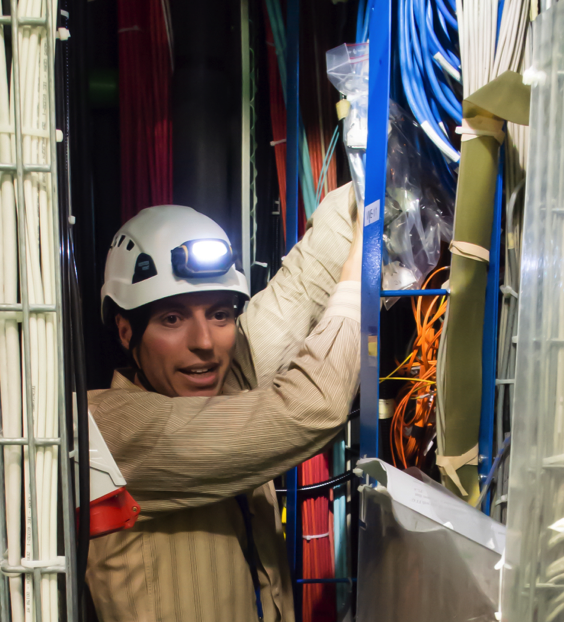