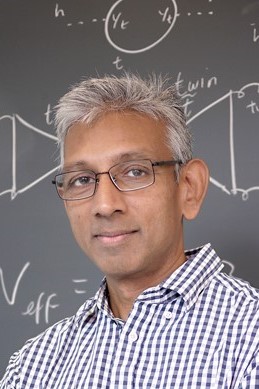 Sundrum and Randall were honored for making a number of theoretical predictions that set off a wave of experiments searching for theoretical subatomic particles—experiments that are still active today, almost two decades later.

“As a theoretical physicist, I always hope my ideas are ultimately connected to experiments that examine the nature of reality,” said Sundrum, who also holds the John S. Toll Chair in Physics and directs the Maryland Center for Fundamental Physics. “It’s very meaningful to me that this prize was awarded for motivating experimental searches for new particles.”

Sundrum studies theoretical particle physics, which seeks to understand the subatomic particles that make up the world around us. The laws of physics—the laws of quantum mechanics, in particular—strongly suggest that such particles should be far heavier than physicists have observed them to be. This disparity is nicknamed the “hierarchy puzzle.”

In 1999, Sundrum and Randall published two papers in the journal Physical Review Letters that have been cited nearly 20,000 times in all. Their work proposed an extra dimension of space that is capable of distorting, or warping, space and time as a solution to the puzzle. People do not experience this dimension because unlike the three dimensions of space, which go on forever, this dimension is highly limited: it is more like an extradimensional, subatomic “bubble.”

However, this dimension can affect particles. In particular, it can dramatically change the mass of particles, making the “true” mass of the particle match the mass predicted by quantum mechanics.

Sundrum and Randall’s work, which became known as the Randall-Sundrum models, makes a number of other predictions. In particular, it predicts the existence of new types of gravitons, which are theoretical particles that carry the force of gravity. This prediction inspired experiments to look for gravitons using the Large Hadron Collider (LHC), the world’s largest particle accelerator located at CERN near Geneva, Switzerland.

“These gravitons would be microscopic gravitational waves bouncing around the extra dimension, so you need a big magnifying glass, which is what the LHC is,” Sundrum said. “Our work has also inspired experiments to search for all kinds of other particles that might exist in the extra dimension. It continues to be an active area of study.”

Sundrum learned about theoretical particle physics as an undergraduate student at the University of Sydney in Australia.

“One day, I came upon a Scientific American article about particle physics,” Sundrum said. “I didn’t even know there was such a thing until I saw that article, but I found the subject so interesting that I decided to study it.”

After receiving his B.S. in mathematics and physics from the University of Sydney in 1984, Sundrum studied elementary particle theory at Yale University, where he received his Ph.D. in 1990. He then took several postdoctoral positions, including one at Boston University from 1996 to 1999.

At Boston University, he studied “dark energy,” a theoretical form of energy that permeates the universe. Sundrum published a number of papers that tackled the topic using extra dimensions. These papers caught the attention of Randall, who invited Sundrum to collaborate. While they did not solve the mysteries of dark energy, their results turned out to be applicable to the hierarchy problem.

“Our finding was completely unexpected,” Sundrum said. “I threw myself at the problem of dark energy and failed, but my failure spun off into a solution for the hierarchy problem.”

After taking a faculty position at the Johns Hopkins University, Sundrum came to UMD in 2010, where he continues to study particle physics in extra dimensions and other topics. Today, he is especially interested in warped extra dimensions as a source of macroscopic gravitational waves—such as those detected by the Laser Interferometer Gravitational-Wave Observatory (LIGO).

In 2018, Sundrum and three colleagues from the Maryland Center for Fundamental Physics—Michael Geller, Anson Hook and Yuhsin Tsai—wrote a paper that is accepted for publication in the journal Physical Review Letters proposing to study the gravitational wave background. Unlike gravitational wave signals from black hole or neutron star mergers, signals from the gravitational wave background can originate from collisions between extradimensional bubbles in the very early universe. These extradimensional bubbles are related to the “bubbles” that make it possible to theoretically solve the hierarchy problem and can potentially teach scientists about the early universe.

“Our study showed that gravitational wave background signals should not be evenly spread across the entire universe, but would rather have hot spots and cold spots,” Sundrum said. “Importantly, the pattern of the hot spots could tell us about how the universe was operating at the very beginning, possibly even before the Big Bang.”

The paper, “An Alternative to Compactification,” Lisa Randall and Raman Sundrum, was published in the journal Physical Review Letters on December 6, 1999.

The paper, “Large Mass Hierarchy from a Small Extra Dimension,” Lisa Randall and Raman Sundrum, was published in the journal Physical Review Letters on October 25, 1999.

For a full listing of 2019 APS Award Recipients visit: http://www.aps.org/programs/honors/new-recipients.cfm