Three University of Maryland physics undergraduates have been awarded scholarships by the Barry Goldwater Scholarship and Excellence in Education Foundation, which encourages students to pursue advanced study and research careers in the sciences, engineering and mathematics.

Over the last decade, UMD’s nominations yielded 33 scholarships—the most in the nation, followed by Stanford University with 29. Harvard University, the Massachusetts Institute of Technology and Johns Hopkins University also rank in the top 10. The campus Goldwater Scholarship nominating process has been led since 2001 by Robert Infantino, associate dean of undergraduate education in the College of Computer, Mathematical, and Natural Sciences. 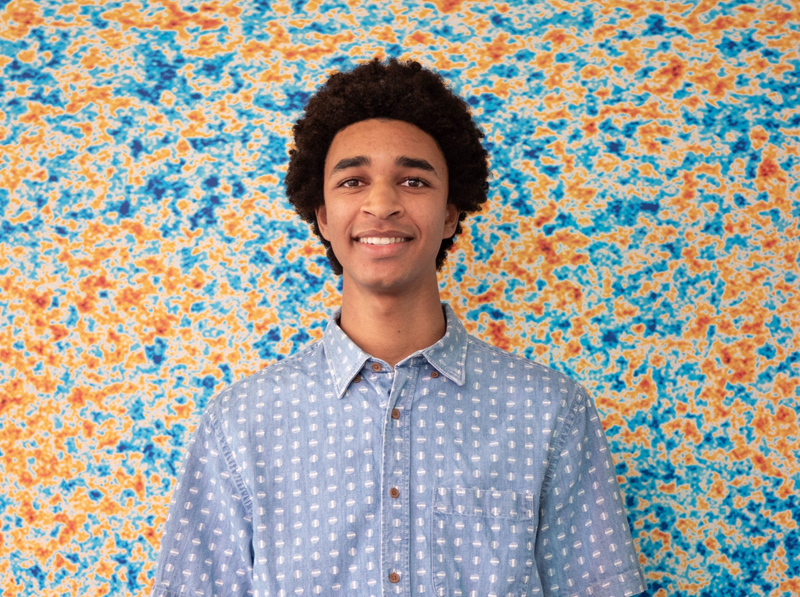 John Martyn. Photo: Faye LevineJohn Martyn—a junior majoring in physics and a member of the University Honors Program in the Honors College—is interested in quantum information and quantum matter. One of his interests is quantum computing, which may solve some problems far faster than classical computers.

Since 2017, Martyn has worked with Physics Assistant Professor Brian Swingle on various aspects of quantum information. Martyn developed a method to prepare approximations to thermal states, which describe quantum systems in contact with a heat bath of a given temperature. Martyn’s method may one day enable quantum computers to study quantum matter systems and models of black holes. Martyn presented this work at the 2019 American Physical Society March Meeting and the 2019 National Collegiate Research Conference.

“John really strives for perfection in his work and has already demonstrated many of the skills needed to function as an independent researcher,” Swingle said.

In addition, Martyn helped administer the high energy physics computing cluster at UMD. Working with Shabnam Jabeen, a lecturer in the Department of Physics who manages the cluster, Martyn simulated the production of theoretical particles that may result from experiments performed using the Large Hadron Collider at CERN, the European particle physics laboratory in Geneva, Switzerland.

In summer 2018, Martyn conducted research with the Laser Interferometer Gravitational-Wave Observatory (LIGO) team at the California Institute of Technology, where he investigated quantum noise in LIGO’s gravitational wave detectors. Martyn constructed optical components and other electronics for a prototype detector with improved sensitivity. For this work, Martyn received the 2018 Carl Albert Rouse Undergraduate Research Fellowship from the National Society of Black Physicists.

Martyn is a member of the UMD chapter of the Society of Physics Students and the National Society of Black Physicists. He is also president of the UMD Skateboarding Club. 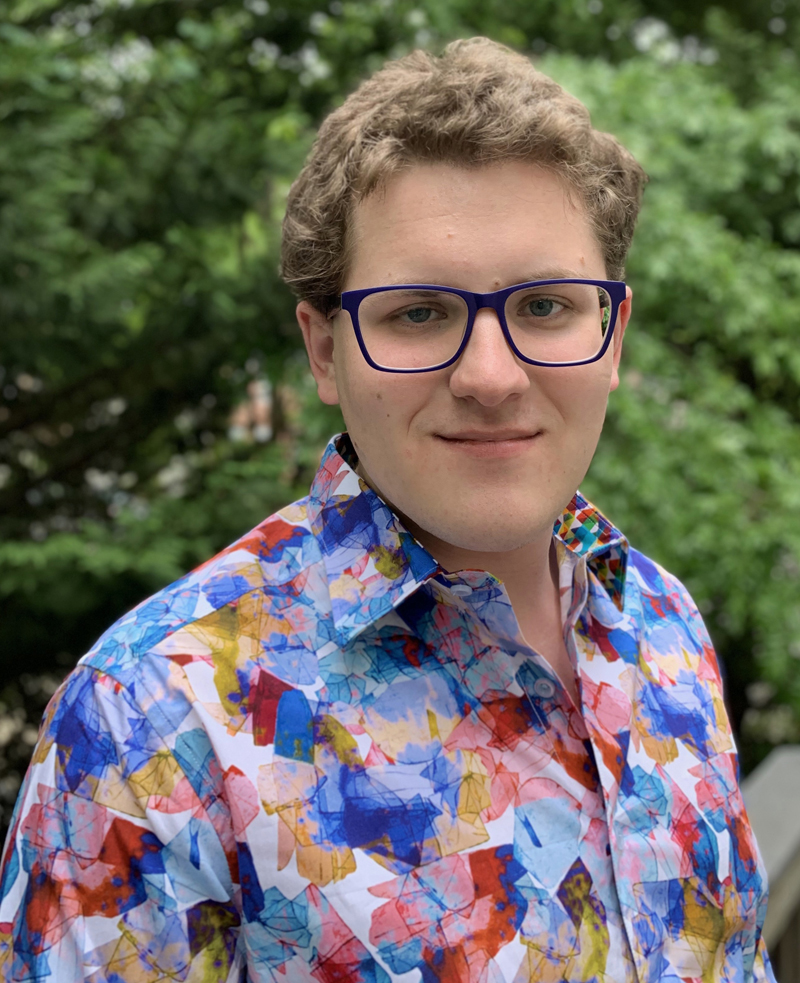 Superconductors are valued for their ability to conduct electricity without resistance. However, conventional superconductors must be cooled to temperatures below -200 degrees Celsius. This makes current superconductor technology impractical for real-world applications, such as smart power grids, power storage units and imaging systems.

Working with UMD Physics Professor Richard Greene at the Center for Nanophysics and Advanced Materials, Poniatowski studies a family of copper-oxide materials called cuprates—high-temperature superconductors that can exhibit superconductivity closer to room temperature.

In one project, Poniatowski and his collaborators found that a particular cuprate responded in unexpected ways to variations in temperature and magnetic field. Their findings may offer clues to the origin of high-temperature superconductivity in cuprates. This work will be published on May 17, 2019, in the journal Science Advances. Poniatowski presented additional results related to this work at the 2019 APS March Meeting.

In addition, Poniatowski is the sole author of an article, forthcoming in the American Journal of Physics, describing the theoretical relationship between superconductivity and the Higgs mechanism in the standard model.

“Nick is extraordinary at both theory and experiment, a combination of skills that is very rarely seen,” said Greene. “He has tremendous potential for significant experimental research contributions in the future.”

In addition to conducting research, Poniatowski served as a teaching assistant for PHYS 272: “Introductory Physics: Fields” and PHYS 441: “Introduction to Sub Atomic Physics.” During summer 2018, he served as a mentor with the Louis Stokes Alliances for Minority Participation. 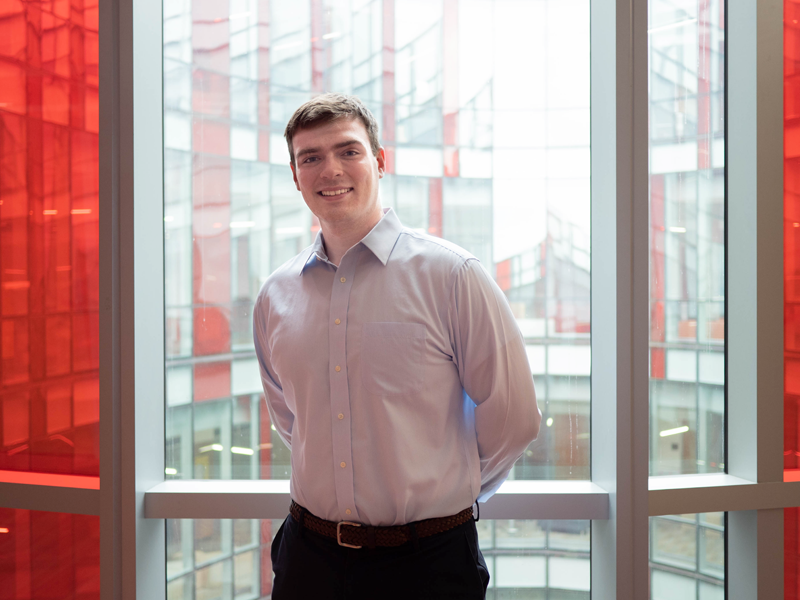 Mark Zic. Photo: Faye LevineMark Zic—a junior majoring in physics and a member of the University Honors Program in the Honors College—is interested in the study of topological materials and superconductors, which have potential applications in quantum computing.

Working with Johnpierre Paglione, professor of physics and director of the Center for Nanophysics and Advanced Materials, Zic conducts quantum materials research. He helped discover and characterize a novel potential superconductor that may one day help quantum computers store information more robustly. This study was published in the journal Physical Review B in 2018.

In addition, Zic led an effort to use the UMD Radiation Facilities to irradiate quantum materials to characterize their physical properties for potential use in quantum technologies. He helped uncover how to study disorder on the atomic level in superconducting materials, which will help scientists understand the fundamental mechanism behind superconductivity. Zic presented this work at the 2018 Canadian Institute for Advanced Research Quantum Materials Summer School and Program Meeting.

Zic also assisted in experiments using ultracold temperatures to characterize a new superconductor that survives under extremely high magnetic fields. This work has been accepted for publication in the journal Science.

“Mark has continued to surprise me with his abilities, initiative and progress,” Paglione said. “He has engaged in not one, but three graduate or even postgraduate level projects in the last year and shows no signs of slowing down. He is a true asset to our center.”

In addition, Zic received the 2016 Angelo Bardasis Scholarship from the UMD Department of Physics from 2016 to 2019.

The Goldwater Scholarship program was created in 1986 to identify students of outstanding ability and promise in science, engineering and mathematics, and to encourage their pursuit of advanced study and research careers. The Goldwater Foundation has honored 66 University of Maryland winners and five honorable mentions since the program’s first award was given in 1989.

Colleges and universities may submit up to four nominations annually for these awards. Goldwater Scholars receive one- or two-year scholarships that cover the cost of tuition, fees, books, and room and board up to $7,500 per year. These scholarships are a stepping-stone to future support for the students’ research careers.