In January, the University of Maryland Department of Physics and the National Institute of Standards and Technology (NIST) for the second time sponsored a Conference for Undergraduate Women in Physics (CUWiP). CUWiP is a three-day regional conference for undergraduate physics majors, bringing students from several universities together for networking, career advice and discussion of research opportunities. The conferences were launched by the American Physical Society in 2006.

Historically, physics has had one of the lowest levels of women and racial and ethnic minorities among all STEM fields. Research by the American Institute of Physics has shown that women and minorities are consistently underrepresented among those receiving physics bachelor's degrees, compared to their portions of college enrollments.

“We believe that efforts to encourage interest and camaraderie can be extremely helpful,” said UMD Physics Director of Education Donna Hammer, who with NIST's Katharine Blodgett Gebbie and Angela Hight Walker organized a very successful CUWiP in 2014. That gathering inspired them to establish the Conference for Undergraduate Underrepresented Minorities in Physics (CU2MiP) in 2016.

Anna Grafov, a UMD Physics undergraduate student and a member of the 2020 Local Organizing Committee, gave the following account: 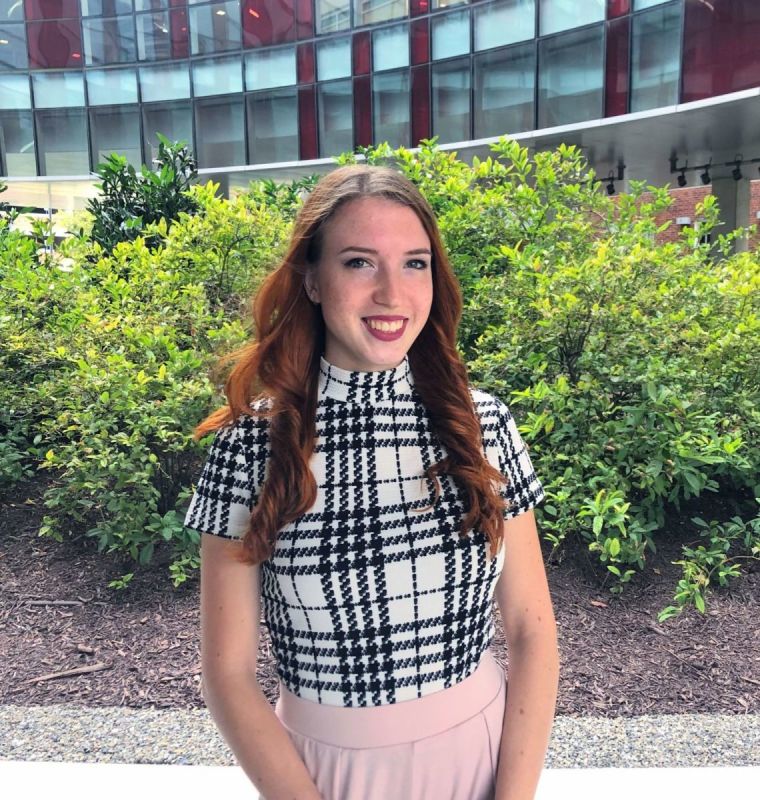 On a cold January morning, the 2020 UMD-NIST Conference for Undergraduate Women in Physics officially began as attendees filed into the Cambria Hotel to check-in. The lobby quickly filled with young physicists from across the country - from locals who came from just down the road, to a group of students from Chattanooga, who braved an 11 hour drive to Maryland.

As the registration dwindled down, the chatter in the lobby increased as students reunited with old friends and introduced themselves to new colleagues, and prepared for the day ahead - namely, traveling to NIST.

Three charter buses filled with attendees made their way there. After a lunch networking with current female NIST physicists and hearing from NIST director, Dr. Walter G. Copan, the CUWiP participants attended a plenary talk by NIST Boulder Prof. Ana Maria Rey, and were introduced to the APS STEP UP program. The students then had the opportunity to tour several of NIST’s world class laboratories, including the reactor. The day concluded with a banquet and a plenary talk by NIST and UMD professor and Nobel Laureate Dr. Bill Phillips, and a chance to network with the renowned scientists. Everyone settled in for a restful night at the Cambria Hotel, aided by advanced blackout curtains and a high-tech Bluetooth mirror.

Bright and early the next morning, attendees were able to check out some of the University of Maryland’s beautiful (albeit construction-filled) campus as they made their way over to the Edward St. John Learning & Teaching Center. After the introduction and group photo (in which nearly 200 attendees fit on one staircase!), the students attended several panels led by physicists ranging from undergrads and graduate students to renowned professors such as former Chief Scientist for BP and director of ARPA-E, Prof. Ellen Williams. The panels covered topics such as the Intersection of Technology and Policy, Life as a Graduate Student, Research Experiences for Undergraduates, Diverse Careers in Physics, and Navigating a Career in STEM as a Member of the LGBTQ+ Community. Women at the conference were thrilled to be able to connect with other physicists who have been through similar experiences - students said that they benefited from “just hearing shared experiences from other women,” and that this gave them “a better sense of community.” The attendees had a chance to continue their discussions over lunch, and also had the opportunity to check out the networking fair, which included booths for local universities and organizations such as APS and OSA. 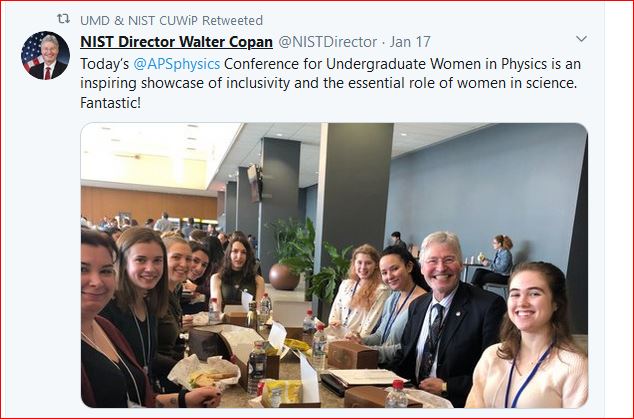 After lunch, the UMD-NIST CUWiP attendees connected virtually with the 17 other CUWiP sites concurrently being held across the country. National Keynote Speaker Dr. Andrea Liu delivered an exciting talk and answered questions posed by students over Twitter. One student said that seeing all of the other sites made her finally able to “conceptualize the number of women physics majors,” and the opportunities to meet other students stood out as a highlight throughout the entire conference. The attendees then had a short break at the hotel, during which they were able to participate in the hotel door decorating contest, and produced some outstanding physics-themed designs. The group then headed to the UMD Samuel Riggs IV Alumni Center for the poster session. The session was packed with over 30 outstanding posters on topics ranging from outreach to advanced research in universities and industry.

The next event was the Quantum Cafe, led by UMD Physics Department Chair Prof. Steve Rolston and several members of the UMD Joint Quantum Institute. Through an exciting presentation, the event demonstrated the importance and implications of quantum mechanics in the modern world. An awards session followed, in which both the best posters and honorable mentions were acknowledged. We then heard a moving speech by Morgan Chamberlain, a physics student from Linfield College, who was commissioned to design the logo for the 2020 UMD-NIST CUWiP. Morgan’s art was featured on the CUWiP totes every attendee received, and even speakers and guests were dazzled by the design. A delicious dinner was served, and the night concluded with an inspiring talk by Prof. Ellen Williams on energy and technology and the implications for climate change.

The final day kicked off with more awards to acknowledge all of the amazing CUWiP participants, including outstanding door decorations and interesting tweets. The attendees then split up into workshops, which covered the topics of Communication and Negotiations Skills, Thriving and Building Inclusion in STEM, Building and Presenting Physics Demonstrations, Applying to Graduate School, and Networking and Job Searching Using LinkedIn. Students completed the workshops feeling more prepared to take on their future careers as physicists. “I had been doubting if physics was the right path for me, but after attending CUWiP, I cannot see myself doing anything else.” These words by one student were echoed in the expressions of many other attendees, who reported that they felt more excited and prepared to continue with careers in physics.

After the workshops, attendees were able to visit some of UMD’s exceptional laboratories and research groups. Not only were they able to see exceptional facilities, but the tours also offered the opportunities to hear about graduate school first-hand from current graduate researchers and speak with professors whose research they may pursue when applying to graduate school. The conference concluded with a final lunch. As the meeting ended, these young female physicists took their time to leave, saying goodbyes, taking pictures, exchanging numbers. This is the lasting impact of attending a CUWiP - joining a community of successful female physicists who support and empower one another. As one attendee so perfectly summarized, “CUWiP made me proud to be a Woman in Physics.”

Amber McCreary, a postdoctoral researcher at NIST who assisted in organizing this year’s conference, was also active in planning a Penn State CUWiP while a student. In NIST’s Taking Measure/Just a Standard Blog, she described some of her experiences as a woman in physics and gave a detailed account of January’s UMD-NIST CUWiP. Read Amber’s perspective here: https://www.nist.gov/blogs/taking-measure/conference-undergraduate-women-physics-leveling-playing-field