For physics Ph.D. student Amitava Banerjee, coming to the University of Maryland was a giant step—literally. Banerjee grew up more than 8,000 miles away in 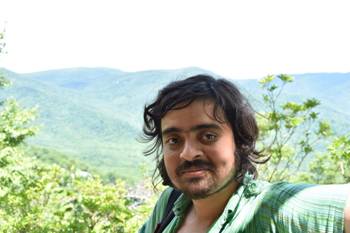 Amitava BanerjeeKolkata, India, with a strong interest in science early on. Both of Banerjee’s parents are physicists, and when he did his undergraduate and master’s work at Presidency University in Kolkata, his own future in physics started coming into focus.

“As I learned more and more, I saw that physics claims it can solve anything in the universe starting from small atoms up to the scale of the full universe and that kind of mission is very, very grand,” Banerjee said. “I feel that if I want to pursue any particular interest, physics will actually help me do that.”

By the time he was ready to begin his doctorate in fall of 2018, Banerjee had done his homework. Though he’d only left India once before, distance was no obstacle. He knew exactly where he wanted to go.

“I was already following the work of many UMD faculty members and I also knew many alumni personally,” Banerjee said. “I felt like I had a connection with them right from the beginning.”

That connection inspired Banerjee and his research, almost from the day he arrived.

“Before coming to UMD I thought that I would be doing work in atomic, molecular and optical physics,” Banerjee recalled. “But I got into working with the Chaos Group led by Professors Edward Ott and Rajarshi Roy and others, and they gave me some problems that I found were too interesting to ignore. So, I started working on them and Professors Ott and Roy became my advisors.”

Now, Banerjee is working to understand real physical systems via computer models made with artificial neural networks that learn to behave like those systems.

“As of now, we have developed a theoretical framework using machine learning that can tell you how different components of a big system are influencing each other, just by looking at their behavior over time,” Banerjee explained. “Examples of such tasks can be very broad. They include understanding how neurons in the brain are wired together just by observing their firing patterns, or how different genes in some unknown biochemical circuitry turn each other on or off, or understanding how different elements of global climate affect each other only by looking at the weather of several days.”

Banerjee’s hope as he continues to test this framework is that by looking inside neural networks or similar computer models, we may one day be able to better understand, or even predict, useful information about real systems in the physical world.

His research is ongoing, but in March 2020 when the COVID-19 pandemic hit, everything stopped. Labs were off limits and Banerjee had to improvise, recruiting his housemates—physics classmates and an alumnus, Wrick Sengupta (Ph.D. ’16, physics)—and taking his work in a different direction. In a letter to the online magazine Physics, he described the experience.

“We have been able to uncover connections between concepts in vastly different areas of physics,” Banerjee wrote. “When we are not busy collaborating, we share in the housekeeping and eat free-delivery or buy-one-get-one-free pizzas. It also helps to have a Netflix subscription, a good stock of red wine, and someone who can bake cheesecakes.”

While Banerjee was working from home, his focus shifted to trying to create a simplified model for a certain class of plasmas, often difficult to deal with computationally because of their complex interactions. The idea was to map the plasmas to a very different set of systems.

“These systems have traditionally been employed to describe synchronization in the natural world,” Banerjee said. “You have synchronization all around in nature, like fireflies flashing in concert in the evening or crickets chirping together or frogs croaking. We have very nice analytical theory describing synchronizations and we have simple models predicting the emergence of synchronous behavior as seen in nature, so I tried to map plasmas onto those models in order to get a simplified model of plasmas. We’ve been able to take this stuff to a point where it’s too interesting to discontinue.”

Though science and physics drive Banerjee’s research, he also has a strong creative side. When he missed his mother’s cooking after coming to the U.S., he taught himself how to prepare the traditional dishes he grew up with.

“When I came here, it was kind of a challenge,” he said. “I took it as a challenge, cooking simple foods like rice and curries, and now I can cook fairly good stuff.”

And although he won’t call himself a photographer, Banerjee’s Instagram account features a colorful patchwork of cellphone images, reflecting the simple beauty he sees around him.

“I like capturing simple things in nature, the little things,” he said.

Banerjee’s creative side is also reflected in one of the studies he’s most proud of. Published in 2019 in the journal Chaos: An Interdisciplinary Journal of Nonlinear Science, this work used a neural network model of systems to infer their underlying interaction network—in the form of a picture of meteorologist and mathematician Edward Lorenz.

It was Lorenz’s simple model for atmospheric convections, and computer simulations of that model in the ’60s, which eventually led to a paradigmatic system of chaos theory. And they have been applied to model a variety of other systems since then, like lasers and electric circuits.

In a sense, Banerjee’s research connected the dots.

“In my work, I have a large number of interconnected Lorenz systems and I try to know how they are interacting using a neural network model of the system,” Baner 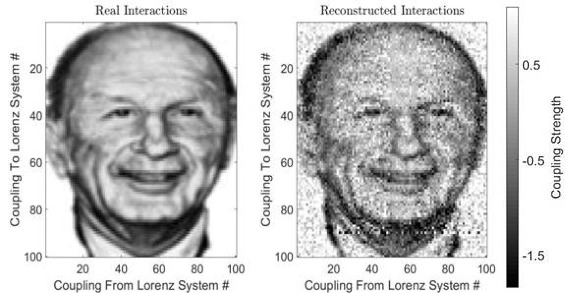 Edward Lorenzjee explained. “To make things more interesting, we used a pixelated portrait of Edward Lorenz to construct the interaction pattern for the Lorenz systems. So now our task of recovering those interactions is equivalent to the reconstruction of the portrait of Lorenz. You can readily see how well our technique works for this case.”

Banerjee later learned about an untold part of the Lorenz story—a woman named Ellen Fetter did many of the major calculations for Lorenz’s theories but wasn’t recognized for her work until decades later. To honor Fetter, and others like her, Banerjee repeated the process he tested with the Lorenz image, but used Fetter’s picture instead. 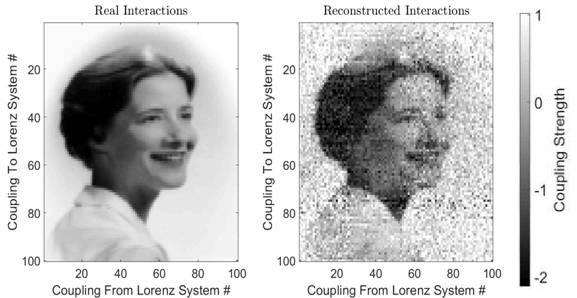 “Just as we saw in the movie ‘Hidden Figures,’ many women were involved in the huge computations behind major scientific discoveries, but were never recognized,” Banerjee said. “I thought that with an increasing general interest to diversify physics and recognize the hidden faces behind many famous discoveries, now is a good time to tell the stories of underrepresented people through our ongoing research.”

For Banerjee, sharing these stories feels personal, because it is.

“My mother had a Ph.D. in physics but she had to leave academia when I was born,” Banerjee explained. “At those times it was harder, because in India I don’t think that we had really good childcare facilities. Knowing my mother had to quit academia makes me feel like it’s my obligation to make physics more diverse and more welcoming so more people can join us.”

Promoting gender and racial inclusion and equality in physics and all the sciences is as important to Banerjee as his research. Involved in groups like Women in Physics and inspired by the Black Lives Matter movement, he sees opportunities for change.

“Recently I became interested in working toward making physics more inclusive and also learning about what I should do or should not do to contribute more toward that,” he said.

Where will Banerjee be five years from now? He’s not certain. But he believes with his love for teaching and mentoring, it will probably be somewhere in academia. One thing he knows for sure—he wants to be part of a different kind of future, and not just for physics.

“If you ask people what’s the biggest open problem in physics, they’ll probably tell you it’s quantizing gravity or understanding the nature of dark matter or something like that,” Banerjee said. “But I would say the biggest open question in physics and society at large is how to make us more diverse—because we can’t advance without answering that.”