Last summer, shortly after arriving at the cosmic ray observatory he oversees in Mexico, Jordan Goodman stepped outside to check on some equipment. No sooner had he seen the snow-covered peaks of Pico de Orizaba towering in the distance than he forgot the task at hand. Goodman knew from experience that his blood oxygen level was low, and his brain wasn’t working at full capacity, so he abruptly went back inside to write down what he was supposed to do.

“You feel fine, but you’re really not functioning right,” said Goodman (B.S. ’73, M.S. ’75, Ph.D. ’78, physics), a Distinguished University Professor of Physics at the University of Maryland who conceived of and oversaw the building of the High-Altitude Water Cherenkov Observatory (HAWC).

Nestled in the shadow of North America’s third highest mountain, HAWC is an array of 300 50,000-gallon water tanks located 13,450 feet above sea level. When working at that extreme altitude, scientists must give their bodies time to adjust. 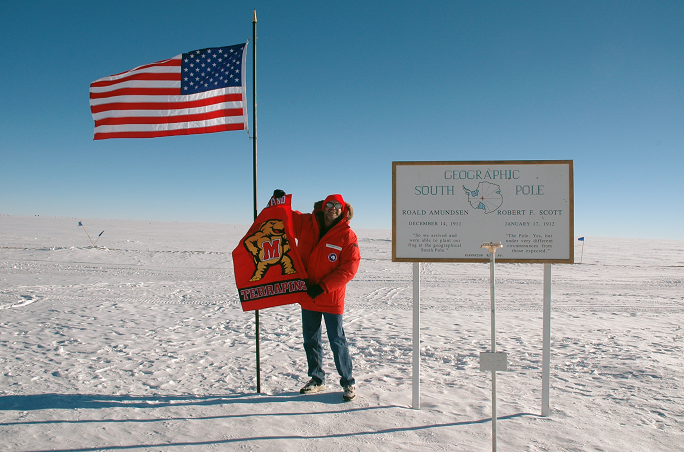 Jordan Goodman at the South Pole

“From the first trip to Mexico scouting out locations for HAWC in 2006, we learned pretty quickly not to make important decisions in the first few days,” Goodman recalled.

Among the other important travel tips he has picked up over the years: While working in a Japanese mine, remember to exchange your steel-toed boots for slippers before entering an office; and don’t ignore the recommendation to bring hand lotion to Antarctica—it really is the driest place on Earth.

“I have definitely been to some interesting and exotic places,” Goodman said. “I tell my students being a professor is like living the life of Indiana Jones. I’ve been to all seven continents for research and conferences, including places most people never get to go.”

Goodman is one of the founders of the field of particle astrophysics. His work plays an important role in the emerging field known as multi-messenger astronomy, which seeks to understand the universe by probing signals from light, cosmic rays and gravity waves.

The Quest for Signals from Space

For the past five decades, Goodman has been on a quest to detect cosmic rays bombarding Earth from space and trace them to their source. Cosmic rays are believed to originate from galactic bodies such as stars and supernovae. Cosmic rays consist of charged particles traveling through space at nearly the speed of light and gamma rays, which are extremely high-energy photons. When these particles reach Earth and collide with air molecules in the atmosphere, they create a cascade of secondary particles—electrons, positrons and sometimes protons that multiply and spread out until they hit the ground.

By studying the composition, shape and arrival direction of this shower of secondary particles, scientists infer information about the primary particles that produced them and their origin.

The highest energy cosmic rays are relatively rare, and the secondary particle showers can cover wide swaths of land. As a result, the detectors scientists use to study them span acres. In addition, cosmic ray detectors work better in some of the most inconvenient places, like high in the mountains where air shower particles can be observed more clearly.

Undeterred by the challenges of building enormous detectors in remote locations, Goodman has led a number of ambitious experiments. He built the first high-energy cosmic ray detector experiment at Los Alamos National Laboratory in 1986. From that experiment, he learned that submerging the detectors in water—using above-ground, backyard pools—dramatically increased their sensitivity. That led him to embark on a 10-year project to transform a football-field sized pond in New Mexico into the Milagro gamma ray detector. It was the first wide-field gamma ray detector that was sensitive enough to not only detect cosmic rays, but to trace them to their source.

Not long after Milagro started producing data, Goodman turned his attention to building the next-generation water detector, HAWC. An order of magnitude more sensitive than Milagro, HAWC has revealed more than a dozen new sources of cosmic rays.

In addition to searching for cosmic rays, Goodman also helped develop a neutrino detector in Japan called the Super-Kamiokande (Super-K). Buried in a mine 3,300 feet below ground, Super-K showed, for the first time, that neutrinos oscillate between three different masses. The principal investigator for Super-K won the Nobel Prize in 2015 for that work, and Goodman was among the researchers awarded the 2016 Breakthrough Prize in Fundamental Physics for Super-K discoveries.

A Terp for Life

Goodman’s research has spanned the globe, but his home base has always been the UMD Department of Physics.

“I like to say I have held every academic position here from freshman to Distinguished University Professor,” Goodman said.

A native of Washington, D.C., Goodman was a child of the Apollo space exploration era and grew up with an interest in space, but he wasn’t sure what career path he wanted to follow. During Goodman’s sophomore year, Physics Professor Gaurang Yodh (1928–2019) invited him to work in his lab, which was investigating high-energy cosmic rays. Goodman began writing computer code for the team, and two years later he was still working in Yodh’s lab and committed to pursuing astrophysics in graduate school at Maryland.

His girlfriend, Carole Chansky (B.A. ’73, art education; M.A. ’78, secondary education), would eventually become his wife and mother to their two children. Together, the family has nine degrees from UMD: eight from College Park and one from the medical school. 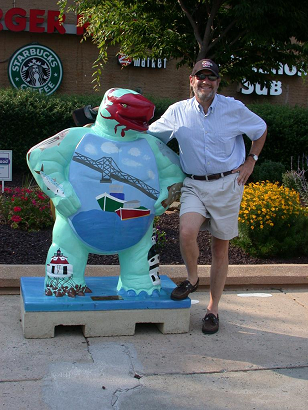 Two Terps: Jordan Goodman is on the right.

Having arrived at UMD as a freshman in 1969, Goodman said he can’t help but feel the parallels with his students of today. He met Chansky while photographing anti-war protests on campus as National Guard troops were marching up Baltimore Avenue. Goodman and Chansky were pepper sprayed that day, and he laments that many of the issues on their minds then remain unresolved today.

“The good thing is, people are once again engaged and active,” he said. “But we haven’t done enough to make a difference in this country. We have to do more, and we have to do better.”

Goodman understands that the challenges are large and the work ahead is long term, but he said he is encouraged by the global interest in moving the needle on social justice issues. And he knows from experience that big challenges are often junctures for opportunity.

Goodman’s first big project ended in failure. It was his Ph.D. research.

“I was working with Goddard Space Flight Center to build a balloon experiment for measuring primary cosmic rays,” Goodman recalled. “I worked with them to build the detectors and all the equipment. This thing was going to be the heaviest balloon payload NASA had ever launched.”

Intended to rise 120,000 feet into the atmosphere, the balloon failed at 60,000 feet, leading to a NASA moratorium on heavy payload balloons. Needing a rapid shift, Goodman turned to an experiment in the mountains of New Mexico that he had been working on analyzing with Yodh.

“You know, a lot of times in physics the biggest, most important discoveries you make are not the things you set out to look for,” he said. “We were looking for new high-energy particles entering the atmosphere behind cosmic rays. But what we were seeing was a lot of low-energy particles, and I wanted to know why.”

At the time, scientists believed cosmic rays were composed of primarily lightweight particles, such as protons, but Goodman discovered that the low-energy particles Yodh’s team observed were produced by heavy primary particles, including iron. This discovery became the basis of his Ph.D. research. It took many years for other researchers to confirm and validate his findings, but that work helped set the trajectory of Goodman’s career and eventually led him to Mexico to build HAWC.

“One of the most exciting things for me has been that HAWC has actually sort of revolutionized our view of a lot of the stuff in the sky,” he said. “We've discovered new classes of objects that no one had really seen before. And now the community realizes that there should be another detector in the Southern Hemisphere.”

With an international effort now underway to build the Southern Wide-field Gamma-ray Observatory in South America, Goodman said it is satisfying to see the scientific community moving forward with ideas he spearheaded so many years ago.

“My job has afforded me the chance to really pursue what I’m passionate about, and it has been rewarding on so many levels: the science, of course, but also the travel has meshed well with my other passions in art, photography, hiking and skiing,” Goodman said. “Not to mention teaching. I love to teach.”

Goodman’s passion for education shines through in the multiple awards he has received, including the Distinguished Scholar-Teacher Award, the Kirwan Undergraduate Education Award and the American Physical Society’s Richtmyer Memorial Lecture Award, among others.

“I’m looking forward to teaching Physics 105: ‘A Global Challenge: Energy and Climate Change,’ this fall,” he said. “It’s going to be different this year, with so much being done online, but that’s OK, I’m good with technology.”

And his 51 years at UMD have taught him that another adventure is always just around the corner.