The American Physical Society has selected Nicholas R. Poniatowski (B.S. Physics, ’20) to receive the 2020 LeRoy Apker Award. The Apker Award, which carries a $5,000 prize for both the awardee and the department, is give 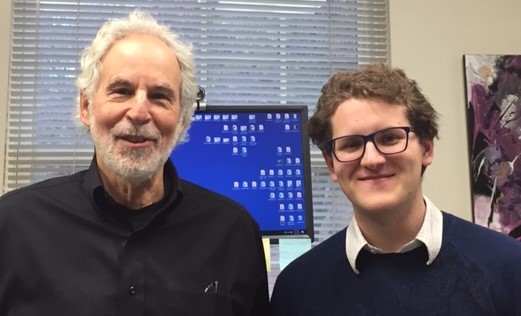 Poniatowski, the first University of Maryland student to receive this honor, entered UMD neither having taken AP Physics nor working in a lab. He began his research in March 2017 with Rick Greene of the Quantum Materials Center; by his spring 2020 graduation, he was a major contributor to three experimental research projects and the author or co-author of five publications and two manuscripts submitted for publication and now under review. Among his accolades are a Barry Goldwater Scholarship, an NSF Graduate Research Fellowship and a National Defense Science and Engineering Graduate Fellowship.

“In the Quantum Materials Center, we routinely support undergraduate research not only to provide students an opportunity to gain experience, but also because there are many talented students eager to help boost our efforts,” said director Johnpierre Paglione. “In Nick's case, we were both delighted and amazed at his abilities and enthusiasm, and are proud to have helped launch his career.”

“I had a great run at UMD, and benefitted immensely from the department’s emphasis on undergraduate research,” said Poniatowski, who was named a 2020 UMD Outstanding Undergraduate Researcher. “Working with Rick was a truly formative experience, and perhaps more importantly, a tremendous amount of fun.”

Greene regards Poniatowski as an extraordinary scholar. “When Nick started work in my lab he had completed a typical freshman level of courses, so I suggested that he read the beginning chapters of a few introductory books on solid state physics, modern physics and quantum mechanics,” Greene said. “To my amazement, he quickly learned much about these subjects, going way beyond what I initially thought he could understand.

“Nick then asked me what symmetry is broken when a material enters the superconducting state. Since I didn’t really have a simple answer to this question, I suggested that he talk to one of my theoretical colleagues, Sankar Das Sarma.”

Within months of raising the question, Poniatowski published a single-author paper, “Superconductivity, Broken Gauge Symmetry and the Higgs Mechanism” in the American Journal of Physics.  (https://aapt.scitation.org/doi/10.1119/1.5093291).

"Saying Nick is exceptionally brilliant and motivated is an understatement," said Das Sarma. "His enthusiasm and drive for doing physics all the time at the highest level are so exuberant and all-encompassing that I had to sometimes hide from him because he dropped by my office to ask serious technical questions about random research topics, which were sometimes exhausting because his questions are always challenging as his understanding of physics is deep."

Greene notes Poniatowski’s exceptional versatility in both theory and experiment. “He very quickly learned a number of significant experimental skills, including preparation of copper oxide (cuprate) thin films by the pulsed laser deposition method and X-ray diffraction measurements to characterize the crystal structure and orientation of these films. He also became expert at various electrical transport measurements, such as resistivity and Hall Effect, which enabled him to measure these properties as a function of temperature and magnetic field. With these measurements, Nick discovered some new and surprising physical properties of the cuprates, high temperature superconductors, the understanding of which has puzzled scientists for more than 30 years. Nick’s experimental results (soon to all be published) will provide new insights into the mysterious properties of the cuprates.”

Moreover, Poniatowski can clearly convey the subject that he loves: he won a TA award as an undergraduate, and during the COVID-19 shutdown prepared a series of Zoom lectures on a topic he plans to pursue at Harvard.  “They are really comprehensive and beautiful lectures,” said Greene.

Poniatowski described his years in Greene’s lab as “a wonderful experience which drastically expanded my knowledge of physics and defined my understanding of scientific research. In addition to his invaluable mentorship, regular pontification about the stock market, and discussions about Proust, Rick offered me a number of opportunities unusual for undergraduates (from a trip to Stanford to getting to write a review article), for which I am extremely grateful.”

“I was also extremely fortunate to work with two fantastic post-docs, Tara Sarkar and Pampa Mandal, who taught me how to actually perform experiments and made day-to-day life in the lab a lively experience. Most importantly, I’ve internalized Rick’s BS-free approach to science, which will continue to guide my thinking for years to come.”