Kate Sturge knew one thing for sure when she began her freshman year at the University of Maryland: she loved physics. So, when she received an email inviting her to apply for the First-Year Innovation and Research Experience (FIRE) program, she immediately searched for an option that would allow her to do physics research. 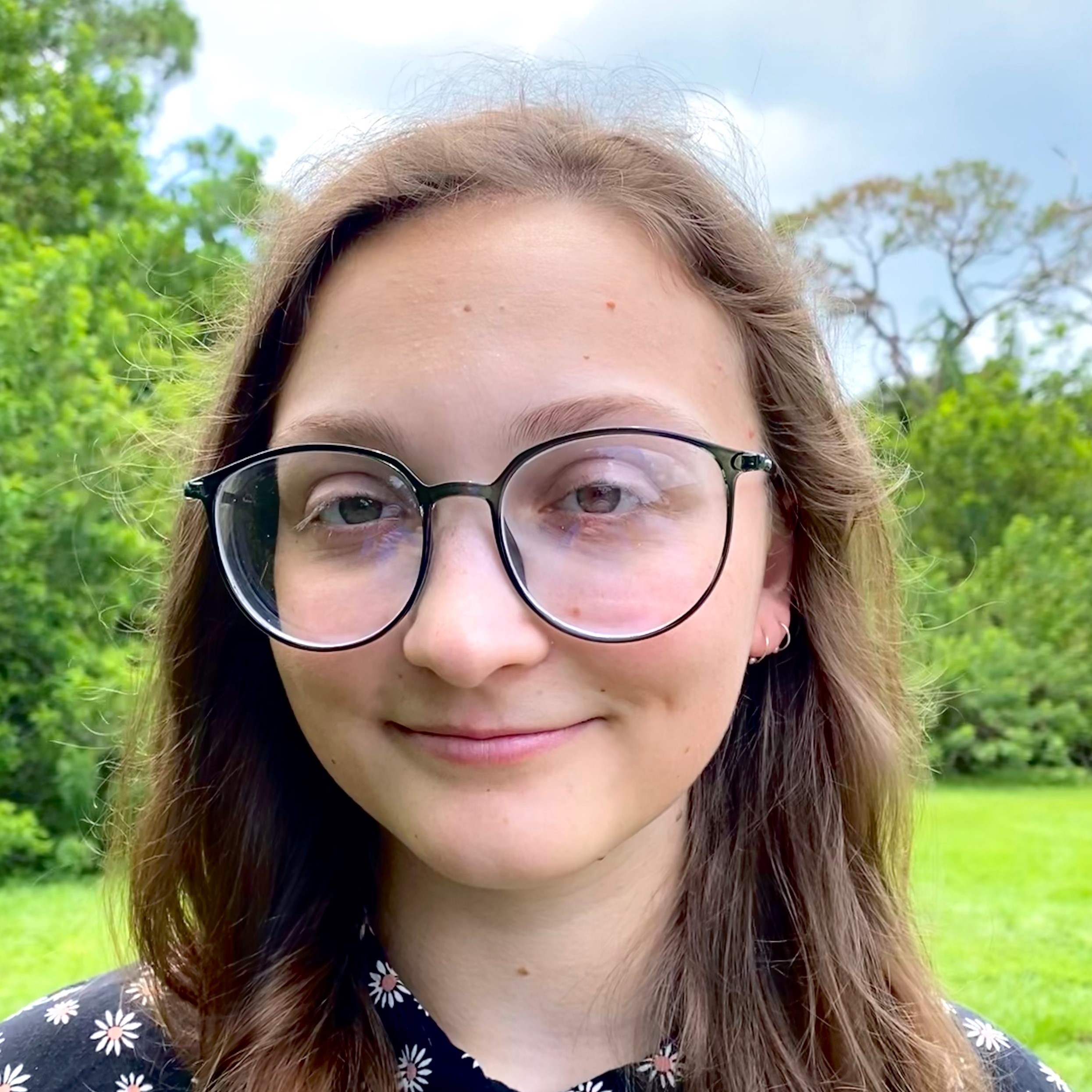 “My interest in experimental particle physics deepened as I went through the FIRE program,” said Sturge, whose dad is a high school physics teacher. “As I learned how excited and passionate high-energy physicists are about their work, I found that type of enthusiasm was contagious—and I caught the bug.”

The field of experimental particle physics explores fundamental forces and particles—building blocks of the universe. The Large Hadron Collider (LHC), located at CERN near Geneva, Switzerland, is the world’s largest and most powerful high-energy particle accelerator and collider designed to examine these particles. One experiment attached to the LHC is the Compact Muon Solenoid (CMS), a general-purpose detector that observes any new physics phenomena that the LHC might reveal, including particles that could make up dark matter.

The CMS detector is currently undergoing an upgrade for higher luminosities, which requires simulation modeling for improved design and performance. That’s where the UMD CMS Experimental High Energy Physics group—and FIRE SPD students like Sturge—come in.

“Our topic is quite cool. My students are doing data analysis of a simulation for the detector that is being built and designed as we speak. And it’s going to be 100 meters underground in France on the border of Switzerland in five or six years,” said Müge Karagöz, assistant clinical professor in the Department of Physics and faculty leader for FIRE SPD. “All my students are doing something related to that particle detector’s computational simulation efforts, from data analysis and visualization to design performance and optimization.”

The SPD stream attracts about 30 students per year from various disciplines. In addition to the three-semester general education curriculum, FIRE students can participate in a summer program to further develop their research and leadership skills. 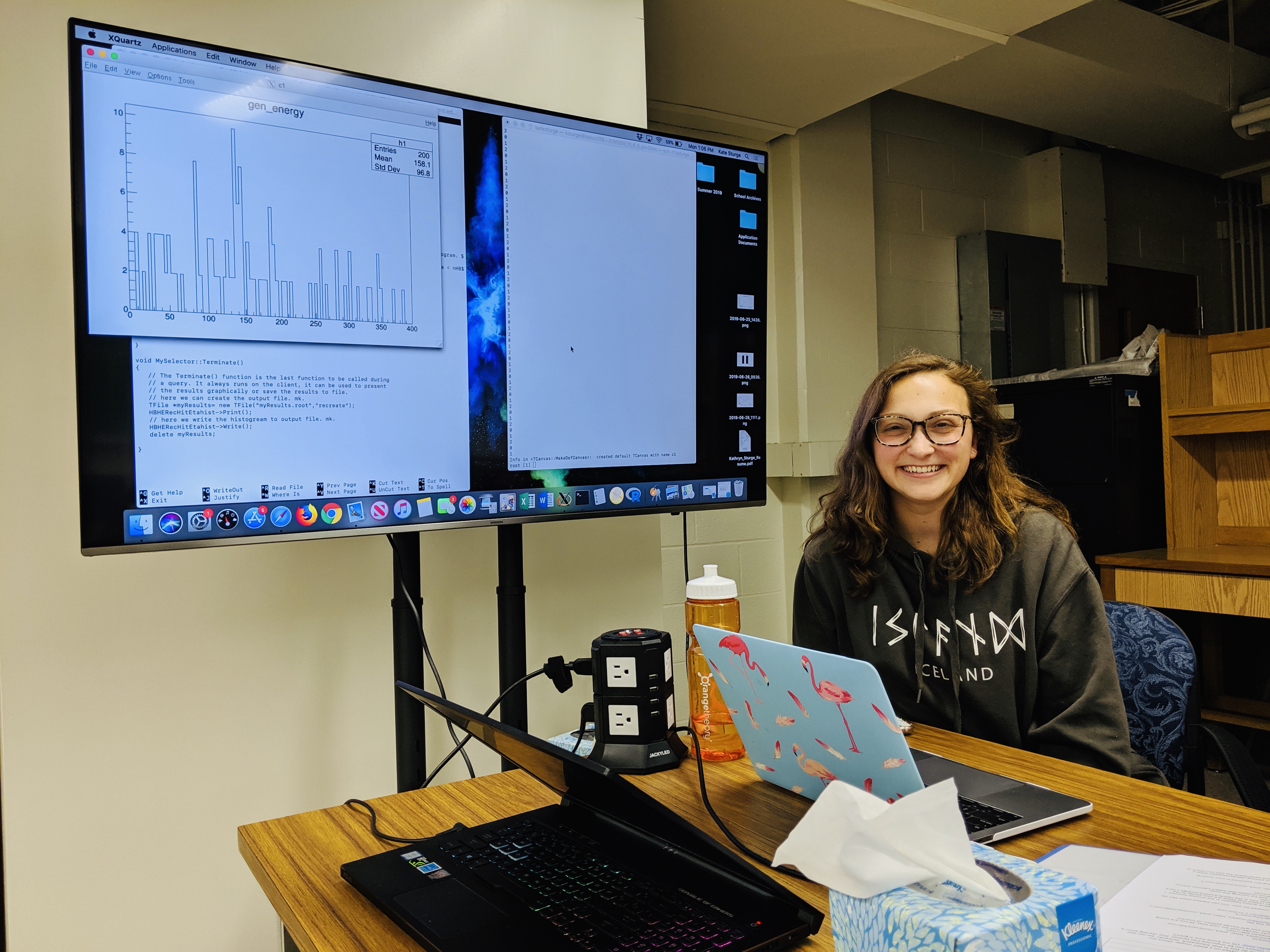 During the summer program in 2019, Sturge attended the US CMS Annual Collaboration Meeting in Washington, D.C., where she met a researcher from Fermilab who was also working on the CMS experiment. He shared a project that would be a good fit for undergraduate researchers with the SPD stream—using computational analysis to study “mousebites” in one of the subdetectors on the CMS detector upgrade.

Sturge decided to take on this mousebite project as a peer research mentor, continuing to advance her research skills while mentoring incoming students.

“In the High Granularity Calorimeter, or HGCAL, the sensors are hexagonal wafers, and within those wafers are smaller hexagonal silicon cells. When a particle passes through the sensors, the hexagonal cells measure the energy that a charged particle produces,” Sturge explained. “In the corners of the hexagonal wafers, the tips have to be cut off to mount the hexagons to each other. You essentially have little gaps in the detector where no signal can be produced because of the little pieces of metal that screw the wafers to each other. Those little pieces of metal are called mousebites.”

After spending the fall 2019 and spring 2020 semesters working on the mousebites project, Sturge helped quantify the energy degradation caused by the mousebites and concluded that it would not have a significant impact on the overall function of the detector.

“Because of her FIRE experience, Kate came to me with a much bigger toolbox of skills related to physics simulations than a typical undergrad starting a research project with me might have,” Eno said. “She was able to quickly come in and help us understand more about the resolution of the calorimeter we are helping to build by 2025.”

The hexagonal sensors on the HGCAL that Sturge previously examined for her mousebites project are constantly bombarded with charged particles, which could lead to radiation damage—and dead cells—over the course of the detector’s lifetime. Sturge built on her mousebites research and worked with Eno and Papageorgakis to determine whether this cell damage would impact the long-term function of the CMS detector.

“I simulated the effects of those dead cells and then used deep neural network machine learning to correct for that damage,” Sturge said. “The deep neural network takes a dead cell’s 20 closest neighbors and outputs a value for the reconstructed energy of the dead cell. We found that we can actually bring the energy resolution very close to what it should be in the ideal case with no dead cells.”

According to Eno, the deep neural network Sturge developed will be used to improve the calorimeter’s performance once the team commences data collection. Sturge and Papageorgakis drafted a “CMS note,” which is a detailed internal document of the CMS detector collaboration. This document is used by 3,000 physicists worldwide who are preparing publications and upgrades for the detector.

With these two research projects under her belt, Sturge was selected for a prestigious internship with CERN in summer 2021, where she worked on the Atlas experiment and learned about different processes and codes related to the LHC.

“I have really enjoyed the opportunities to challenge myself and learn skills that aren’t taught in traditional physics courses,” Sturge said. “It’s meant a lot to me to get to see what I can do given the tools and resources to succeed.”

Looking ahead, Sturge’s goal is to work in computational high-energy physics research.

“Being able to recognize a pattern through computational analysis is really powerful and exciting,” Sturge said. “Even the grunt work that goes with it, going through and debugging, the grueling hours of trying to find why your code won’t run—I’ll even find that I sit down at my computer and look up, and five hours have gone by. It’s just something that I genuinely enjoy doing.”