Nicole Yunger Halpern Ponders Quantum Mechanics, Thermodynamics, and Everything Else

There is a well-known saying, of disputed origin(link is external), that dissuades students and even working physicists from thinking too deeply about the meaning behind quantum physics. “Shut up and calculate,” it goes. Nicole Yunger Halpern, an affiliate of JQI and the newest Fellow of the Joint Center for Quantum Information and Computer Science (QuICS), was never one to abide by this mantra.

Instead, Yunger Halpern, who is also a physicist at the National Institute of Standards and Technology, brings a vast intellectual curiosity to physics, from tackling abstract theory to collaborating with experimentalists, all the while drawing distinct connections between diverse disciplines of physics. She also brings her research to life through writing, imbuing it with historical, philosophical, and even artistic context. 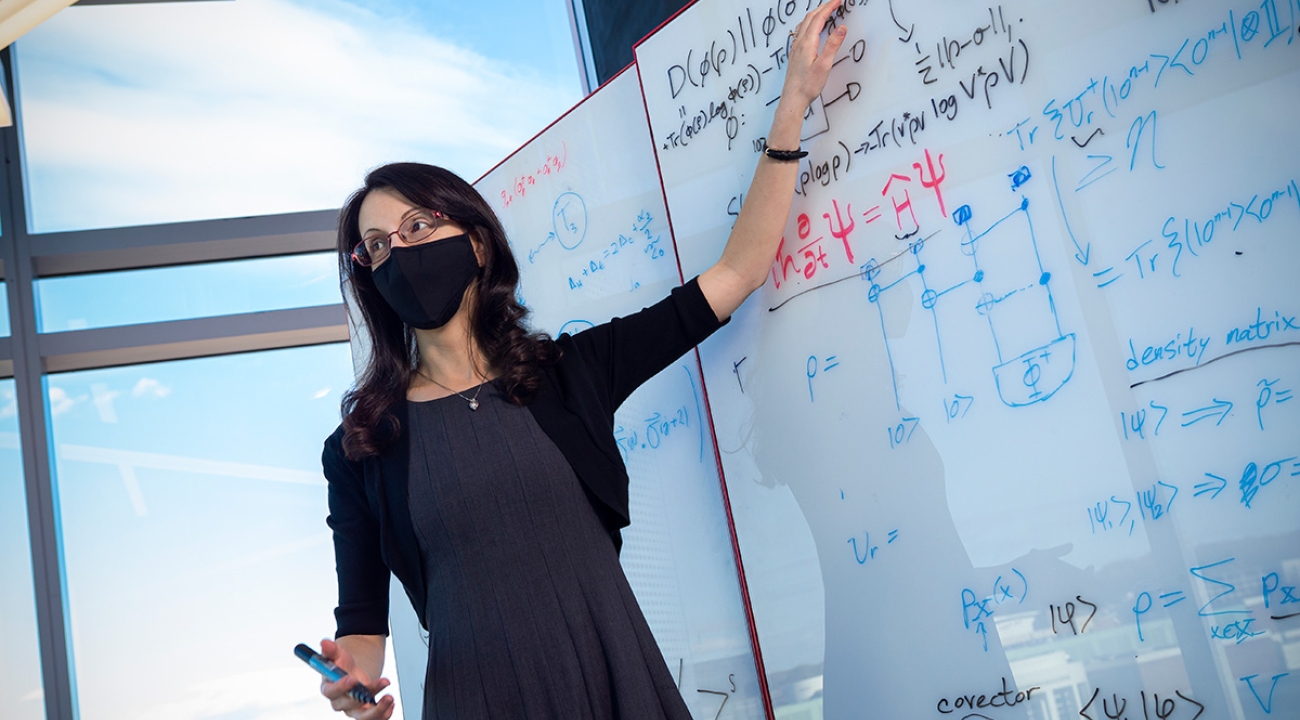 Her self-titled research direction—at the intersection of quantum information theory and thermodynamics—is “quantum steampunk,” after the steampunk genre of literature, art and film that envisions a 19th century world where steam engines power futuristic gadgets, like flying boats and robots. Her book(link is external) of the same title is scheduled for publication in the spring of 2022. She will discuss it at the physics colloquium on Tues., March 29 at 4 p.m. in room 1412 of the John S. Toll Physics Building.

Thermodynamics, developed largely in the 19th century, is the “steam” in Yunger Halpern’s research, merging with the futuristic science non-fiction that is quantum mechanics. Quantum thermodynamics explores how quantum mechanics can impact and enhance thermodynamic problems, such as channeling energy and heat to perform work, and it raises new questions about information transfer in the process. “What steampunk fans dream,” Yunger Halpern writes in her Ph.D. thesis(link is external), “quantum-information thermodynamicists live.”

Yunger Halpern’s voracious appetite for ideas from diverse disciplines dates to her childhood in Florida. “I grew up reading basically all the time,” she recalls. “I would read while waiting for my parents to pick me up from school; while standing in line; and while in restaurants, waiting for food to arrive. I was interested in everything.”

As early as high school, thermodynamics caught Yunger Halpern’s eye. She remembers learning about entropy, a measure of disorder in a collection of particles, in a biology class. The second law of thermodynamics states that entropy, once it increases, can never go back down—a familiar concept to anyone who’s ever tried to stuff toothpaste back into the tube or unscramble an egg.

Some physicists believe that this irreversibility is what gives time its forward direction. “I’m fascinated by entropy,” Yunger Halpern says, “because it’s this abstract concept, quantified with a funny-looking function, but it has such important real-life implications.”

Yet, despite the early fascination with entropy and a high school physics class she loved, Yunger Halpern was still not willing to put on academic blinders after enrolling at Dartmouth College. “Two physics professors helped me design a major that enabled me to view physics from many perspectives,” she explains. “It was partway between the standard physics major and the create-your-own major.” The bespoke major included conventional physics courses combined with some math, philosophy and history.

It was a history of science class in her final term at Dartmouth that further pushed Yunger Halpern to make physics her primary focus, and to pursue graduate school. She was the only student in the class with a scientific background, and she noticed this gave her a different perspective on the course. “I couldn’t help noticing that I understood these topics more deeply than my classmates,” she says, “and I realized that I wouldn’t have been satisfied if I’d learned the material strictly at the level required for the history course.”

Similarly, she realized, she wouldn’t be satisfied if she refrained from studying a host of other topics—cosmology, field theory, etc.—at the level required of a physics student. “So, I was determined to remain a physics student—to study physics more deeply,” she says.

After completing her degree at Dartmouth, Yunger Halpern continued to follow a somewhat unconventional path. She spent a year as a research assistant at Lancaster University in England, followed by a one-year master’s program at the Perimeter Institute for Theoretical Physics in Waterloo, Canada. After starting a Ph.D. program at Caltech, she spent another semester as a visiting graduate student in Oxford, England.

It was during her master’s studies that Yunger Halpern had her first taste of combining quantum information theory with thermodynamics, under the guidance of then-postdoc Markus P. Müller and faculty member Robert Spekkens. They made use of quantum resource theories—a set of mathematical tools that look at quantum objects as resources that can be spent to accomplish a task—as a framework for thermodynamics(link is external).

Yunger Halpern reveled in the interdisciplinary nature of the work, as well as its real-world relevance. “That project was exactly the springboard that I’d sought to embark on research in quantum information theory and thermodynamics,” she says.

This set the course for her quantum steampunk career.

Propelled forward by her deepening passion, Yunger Halpern attended graduate school at Caltech under the mentorship of John Preskill, a giant in the field of quantum information science. “At the time, I was interested in a very theoretical, abstract flavor of quantum thermodynamics,” she explains. “Very few researchers in the United States supported it. But I told John what I wanted to do, and he said, ‘Ok. Do it.’ I felt that I’d have the freedom and support to undertake the research that I felt drawn to.”

This freedom brought her to a key insight(link is external) at the intersection of two seemingly disparate questions—how much work you have to do to push a collection of particles into a different configuration (like squeezing toothpaste into a travel-sized tube) and what happens when information is thrown into a black hole. Simply put, both processes depend crucially on the direction of time, like the toothpaste that won’t go back in the tube. Noticing this connection allowed Yunger Halpern to derive an equation relating quantum scrambling—the thing black holes are thought to do with information—to something that could be measured in the lab. Experiments realizing a simpler version of Yunger Halpern’s protocol were carried out(link is external), not inside a black hole, but in the lab of Kater Murch at Washington University in St. Louis.

Next, Yunger Halpern and her collaborators designed a truly steampunk invention(link is external): an analog of a steam engine that relies on an exotic quantum phase. This phase’s superpower is that it thermalizes very slowly or not at all, akin to an ice cube that stays cold on a warm summer day. It’s a collection of quantum particles that are kept in a box with a jagged and disorderly floor, creating a randomness that prevents the particles from freely bumping into each other and exchanging energy in a phenomenon known as many-body localization (MBL).

Drawing on ideas from her research at Perimeter, Yunger Halpern, with her collaborators, realized that a state that does not thermalize could be used as a resource. The engine, which they called ‘MBL-mobile’, is a four-stroke cycle that takes a collection of quantum particles in and out of the MBL phase to extract work.

At the beginning of her graduate career, alongside her research, Yunger Halpern committed to writing a blog post every month for Caltech’s blog Quantum Frontiers(link is external). This is a habit she’s kept to this day, having recently published her 100th post(link is external).

Through the blog, she’s managed to continue cultivating her lifelong love of writing. “I was writing stories as early as second grade,” she says. “The best physicists I’ve met explain their science in terms of stories colored by a few simple, basic equations, so writing stories about my physics regularly feels natural.”

Yunger Halpern’s blog posts touch on literature, history and anthropology from all over the world, drawing analogies and placing her work as a scientist into a larger context. “It provides a useful creative outlet,” she says. “Physicists value creativity, but there are some things that even we aren’t allowed to write in papers. I can write those things on the blog, which keeps my imagination in high gear and so enhances my physics.”

After Yunger Halpern moved on to a postdoctoral position at Harvard University, her writing landed her a feature story in Scientific American(link is external). Now, her new book, “Quantum Steampunk: The Physics of Yesterday’s Tomorrow,”(link is external) is about to hit bookstores nationwide. “The book is almost entirely nonfiction,” she says, “but each chapter begins with a snippet from an imaginary quantum-steampunk novel. I also worked with my editors and illustrator to bring out the steampunk aesthetic of quantum thermodynamics—not only in the explanations, but also in the figures and even in the fonts.” 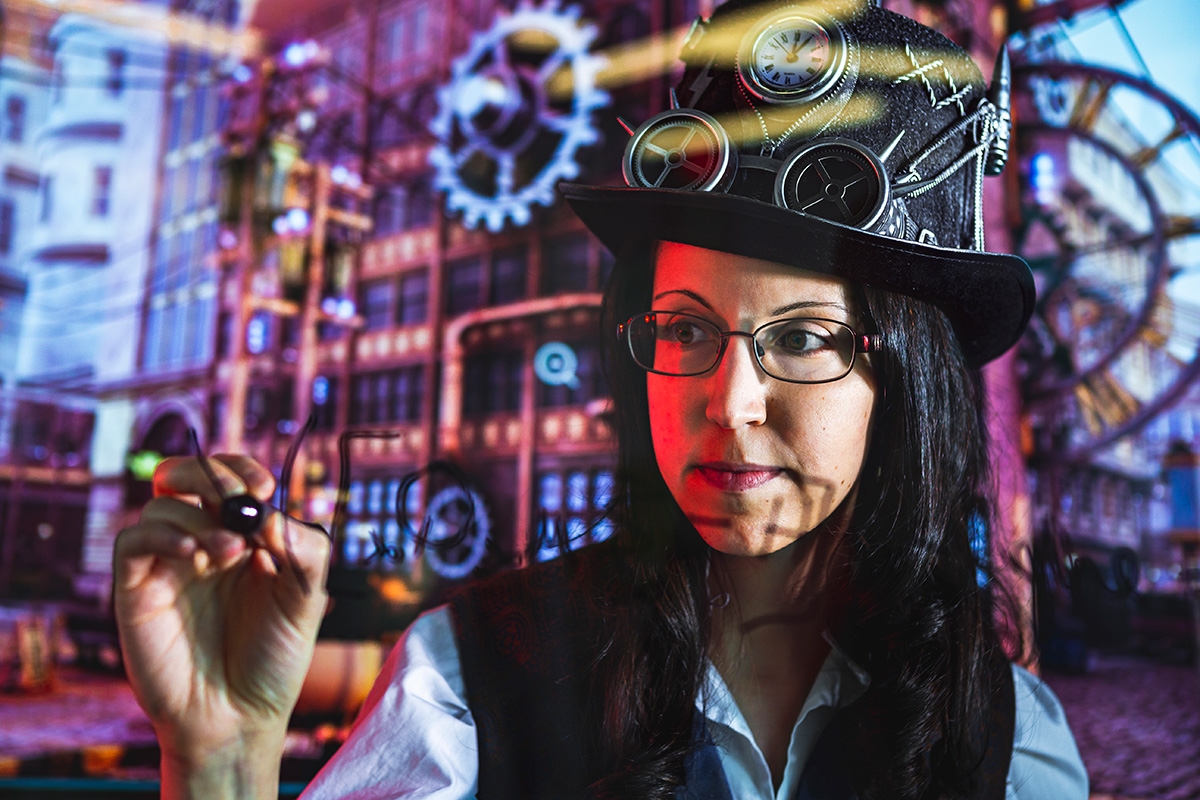 Photo by John T. Consoli/University of MarylandAt the University of Maryland, Yunger Halpern looks forward to forging new collaborations with senior researchers as well as training young scientists. “The people at Maryland—the colossal quantum and statistical-mechanics communities—certainly drew me. I have worked with Chris Jarzynski, who’s a wonderful scientist and a wonderful person, and I’ve visited the College Park campus several times over the years because I simply couldn't stay away from the research.”

She is also drawn to Maryland’s interdisciplinary structure, believing it will feed her insatiable drive to connect scientific disciplines. “I’m looking forward to making even more new connections,” she says.