Alicia Kollár Bridges Abstract Math with Realities of the Lab

Eugene Wigner, a Nobel Prize-winning mathematical physicist, once said, “The miracle of the appropriateness of the language of mathematics for the formulation of the laws of physics is a wonderful gift which we neither understand nor deserve.”

Indeed, mathematics may seem abstract or even irrelevant until it’s used to describe the natural world around us. The reverse is occasionally also true: Physical realities, when brought to a mathematician’s attention, can inspire new questions and new discoveries.

The research of Alicia Kollár, a Chesapeake Assistant Professor of Physics at the University of Maryland and a Fellow of the Joint Quantum Institute, embodies the give and take of this relationship between physics and mathematics. In her lab, she brings abstract theories to life and in turn collaborates on new theorems. She has forged a research program of manipulating light on a chip, coaxing the light into behaving as though it lives on the surface of a sphere, or a mathematical abstraction known as a hyperbolic surface. She also collaborates with mathematicians, furthering both the understanding of what these chips can do and their underlying mathematics. 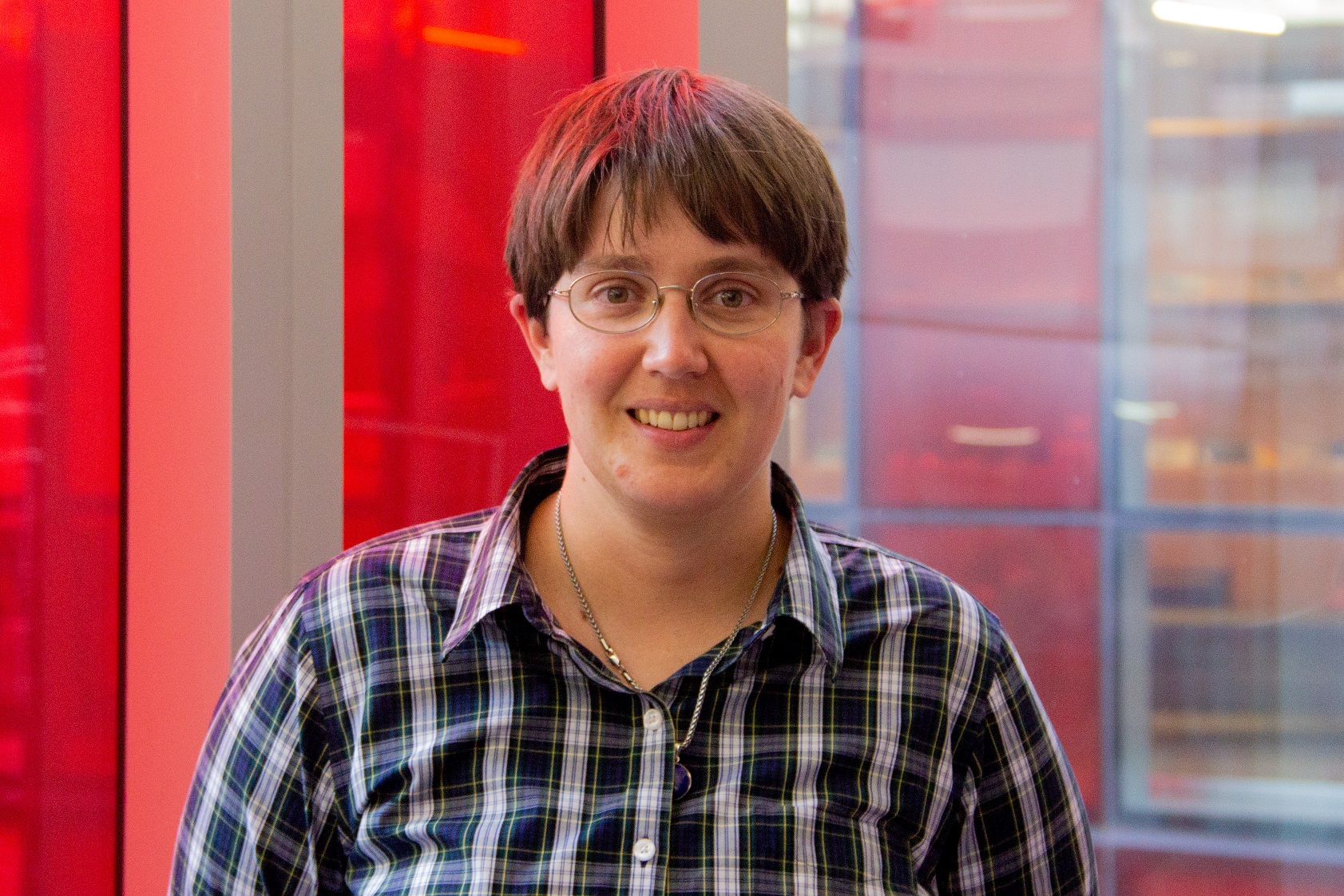 Alicia KollárA direct collaboration with pure mathematicians is uncommon for a physicist, particularly an experimentalist. But Kollár is no stranger to mathematics. Raised by two mathematicians in Princeton, New Jersey, she was exposed to the discipline early on. However, Kollár said her parents didn’t pressure her to pursue mathematics growing up.

“It never crossed my dad’s mind to try to force me to do what he loved,” Kollár said. “He considered that pointless, like ‘You should go into research for you, not for somebody else’s expectations.’”

Her father, János Kollár, a professor of mathematics at Princeton, had a slightly different take.

“She was always interested in science, so I didn’t need to apply any influence,” he said. “If she was only interested in rock music it might have been different.”

Free to pursue whatever she pleased (short of rock music), Kollár studied advanced math, but without much enthusiasm.

“I was fortunate to be able to take quite a bit of college-level pure math as a high schooler,” she said. “And I would say that I think I was good at it, but I didn’t love it. I just kind of didn’t care.”

“He was a crusty old dude that loved Far Side cartoons,” she recalled. “And he wouldn’t put up with anybody that was too cool for school. He taught non-calculus physics, but he taught that you have to think about it—not ‘Here’s a method learn how to do it.’ We became really good friends, and I really liked thinking about how it works, you know, the physical intuition part of physics.”

She attended college at Princeton University, remaining in her hometown and further developing her fascination with physics.

“I was sort of divided between math and physics as a freshman,” Kollár said. “But the more physics I took, I never looked back.”

During her first summer research experience, she was charged with taking apart a telescope mount for a cosmology group. That’s when she found her calling as an experimentalist.

“I had a lot of fun that summer,” she said, smiling. “I ended up building a 1500-pound steel support structure. I was up to my eyeballs in machine oil and loving every minute of it.”

When applying to graduate schools, Kollár’s soon-to-be Ph.D. adviser Benjamin Lev, now an associate professor of physics and applied physics at Standford University, called her and convinced her to join his lab. He enticed her with the promise that, as an atomic and optical physicist, she could do both theory and experiment side by side. She joined his group at the University of Illinois at Urbana-Champaign, and, in her first year, moved with the whole team to Stanford.

Kollár’s Ph.D. work consisted of building a novel experimental apparatus from scratch, designed to trap atoms and photons together and allow them to influence each other in significant, controllable ways. The resulting experimental setup launched a new direction in its field, according to Lev.

“From beginning to end, it was just an amazing graduate school experience, where you see something from the inception of the idea to actually showing that this new experimental technique can work,” Lev said. “And she was always a thought partner. We were thinking through the ideas, writing the equations on the board, working with theorists, and she was an equal thought partner on all of that.”

After graduate school, Kollár found herself returning to Princeton. “Princeton is a black hole,” she said. “You can never quite leave. Maybe it’s the Hotel California, you know?”

She became a postdoctoral researcher in the lab of Andrew Houck, a professor of electrical and computer engineering and a Fellow in the Princeton Center for Theoretical Science. Houck worked with coplanar waveguides—little paths printed on a circuit board that confine light in a tube the thickness of a human hair. These paths have become the setting of many of Kollár’s mathematical explorations.

Kollár was in her office one day, playing around with one of these coplanar waveguide chips. This one contained a waveguide lattice—a repeating grid, one waveguide after the other. Lattices are a familiar concept to physicists from the study of metals, where atomic nuclei form repeating patterns, extending in all three directions.

Kollar’s mathematical training bubbled up, flooding her brain with ideas. She envisioned a similar lattice, but instead of one dimension it would extend in two. And, she realized, thanks to the properties of coplanar waveguides, there was a lot of flexibility in the ways she could shape these grids.

Instead of being points, as in a conventional lattice of nuclei in a metal, the sites of this lattice were paths—lines that guide light around. And, Kollár could bend and stretch these lines however she wanted without changing the underlying physics, as long as the total length stayed the same.

Kollár realized that by scrunching and stretching these waveguides, she could connect them to each other in ways that aren’t possible for normal lattices of points, at least not in the world we are used to. Instead, the waveguides would act as though they are on the surface of a sphere, or a mathematical construction known as a hyperbolic surface, where traditional ideas of parallel lines, triangles and navigation break down.

Kollár and her collaborators successfully showed that coplanar waveguides can indeed form lattices that act as though they live on a hyperbolic surface.

Kollár found that these hyperbolic lattices had some cool physics properties. In particular, she found that they gave rise to something called flat bands—paradoxical places where, regardless of how fast a particle is moving, its energy stays the same. These flat bands are thought to be behind some of the most intriguing unexplained physical effects, like the fractional quantum Hall effect, spin-​liquids, and even some cases of high-temperature superconductivity.

“When I discovered these flat bands, I actually thought I made a mistake in my code,” Kollár said, “I turned around to my lab partner, and I was like, ‘I think I messed up but if I didn’t, this is really cool.’ And so at the time, we didn't understand where that was coming from. What we've since come to understand is that was really just the tip of the iceberg.”

To understand the full potential of this new technique, Kollár joined forces with Peter Sarnak, professor of mathematics at the Institute for Advanced Study at Princeton. This collaboration has proved extremely fruitful. Together, they showed that the flat bands were far from a mistake. In fact, they proved that the flat bands must exist in any hyperbolic lattice of the kind Kollár creates.

Now, she is leading her own group at UMD and is working on coupling bits of quantum information—called qubits—to these exotic lattices. She has assembled a group of like-minded students, interested in addressing novel physics. Although there’s no way to know exactly what the future holds for Kollár, it’s fair to anticipate that she will continue to follow her nose to interesting and unexpected places.

“I think what was special about Alicia is that she always had her own mind and she did not want to follow what others were doing,” her father, János, said. “It can be frustrating when you're a two-year-old, but I think in the long run if you can follow your own mind very seriously it can work out very well.”