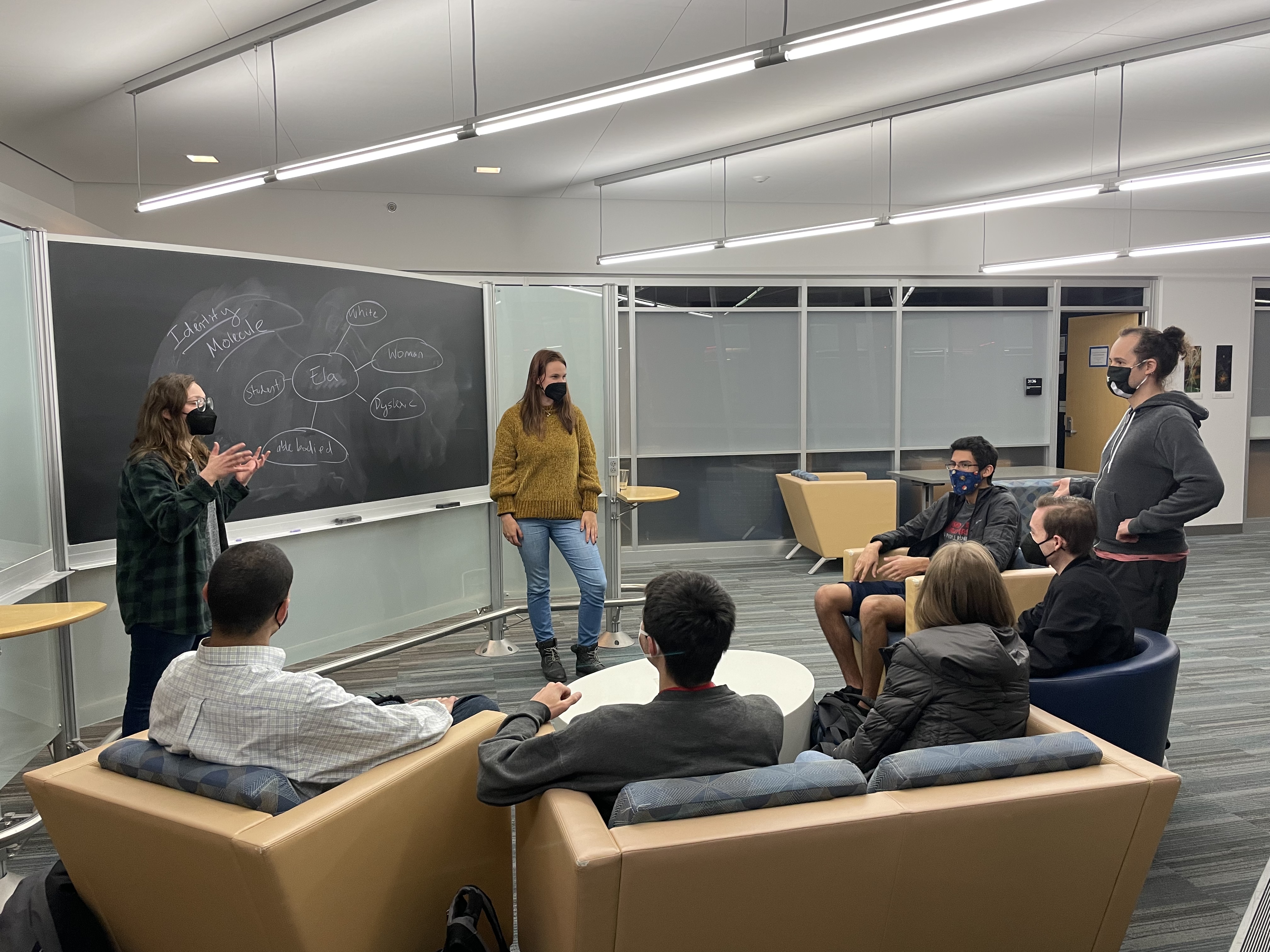 of their honors math course freshman year, they quickly realized they were two of three women in a room of about 25 people.

All through high school, Rockafellow noticed how the number of women, gender minorities and students of color diminished in her advanced STEM classes, especially physics and math. When she asked her friends why their passion for science had faded, they told her they didn’t feel smart enough for the coursework—and often mentioned specific experiences or interactions that had discouraged them.

Studies show that since the ’90s, young women and men have earned about the same number of math and science high school credits, with women performing slightly better than men in these classes. But men are more likely to take the advanced placement exams to receive college credit. Seeing this themselves, Rockafellow and Sturge wondered how the dynamic could be changed so young members of underrepresented groups would feel empowered to pursue their goals in STEM.

“I think everyone in physics has felt like they’re not smart enough at one point or another,” said Rockafellow, a 2021 Goldwater Scholar. “But the compounded effect of society’s assumption that certain people aren’t as intelligent as others, especially in STEM spaces, can make it significantly more difficult to stay in the field.”

Rockafellow and Sturge, now co-presidents of the Society of Physics Students (SPS), decided to develop a class that would provide undergraduate students with the tools to counter society's assumptions about students in STEM. The idea for the course had initially been raised by attendees in an SPS town hall meeting in fall 2020. As SPS co-presidents, Rockafellow and Sturge decided to push the concept forward and create the course themselves in close collaboration with the director of education for the Department of Physics, Donna Hammer.

For months, Rockafellow and Sturge brainstormed the right course structure with Hammer, determining the necessary elements to make the course a reality. Together, they landed on a one-credit speaker series seminar to pilot the class, which became PHYS 298D: Diversity, Equity and Inclusion in Physics.

“The idea was that from listening to a variety of speakers, students would gain a broader perspective, both validating the experience of minority students and increasing empathy and understanding of what minority members of the physics community go through,” Rockafellow explained. “Once we put together a rough outline for a curriculum, we sent it to everybody we knew who knew had experience in DEI work, and we got tons of feedback on how to make the course most effective.”

To host this seminar, Rockafellow and Sturge first needed to find speakers. Starting with the American Physical Society’s climate report author list, they emailed hundreds of DEI experts to find the right mix of perspectives.

“We ended up getting a lot of really well-known people in the field to come speak just from asking,” Sturge said.

“The seminar format was a natural fit and an exciting student-driven curriculum endeavor,” Hammer said. “Ela and Kate have excellent leadership skills and true dedication to addressing and solving DEI issues.”

When freshman physics major Alejandro Escoto registered for PHYS 298D, he already had some understanding of the challenges underrepresented minorities have faced in physics. But he didn’t realize just how extensive those challenges were.

“In this class, we explored in-depth why women and people of color have been excluded in physics, how it continues to happen and what each individual can do on a small scale to change that narrative,” Escoto said. “I left the class with a better understanding of how my own privileges play into my navigating of the field and how the things I say will end up affecting other people.”

For the course’s final project, students proposed projects to advance DEI efforts in their academic communities. For example, Escoto proposed a follow-up course to PHYS 298D on the history of science, focusing on the achievements of a wide range of scientists rather than just white men.

“There’s a culture of there being one type of physicist,” Sturge said. “Usually, that physicist is white, male, cisgender, straight. That’s the box that you have to fit in. It’s our responsibility to use our privilege as white women to speak up and work toward a goal of dismantling that ideology in physics.”

With the successful pilot behind them, Rockafellow and Sturge are looking for ways to grow the size of the course the next time it’s taught and they’re revising the PHYS 298D curriculum to meet the Understanding Plural Societies general education requirements. They also hope to continue their outreach work toward building a more diverse, inclusive physics community as they apply to graduate school.

“When you have a bunch of diverse minds together, science really flourishes,” Sturge said. “That’s why this work is important. We’re all working toward a better physics community.”