Don’t Be Afraid of the Fog

As a young boy growing up in Iran, Masoud Loghmani (B.S. ’96, physics) loved to spend summer nights under the stars, imagining the possibilities.

“I remember back then there was a lot of buzz about humans landing on the moon and the Apollo flights were all over the news,” Loghmani said. “Every night in the summer we would go out and we would watch the moon and the stars and I would ask my parents, ‘Are the astronauts up there? Are they up there traveling?’ I was maybe four, five years old and it was just amazing for me.”

All these years later, some things haven’t changed. 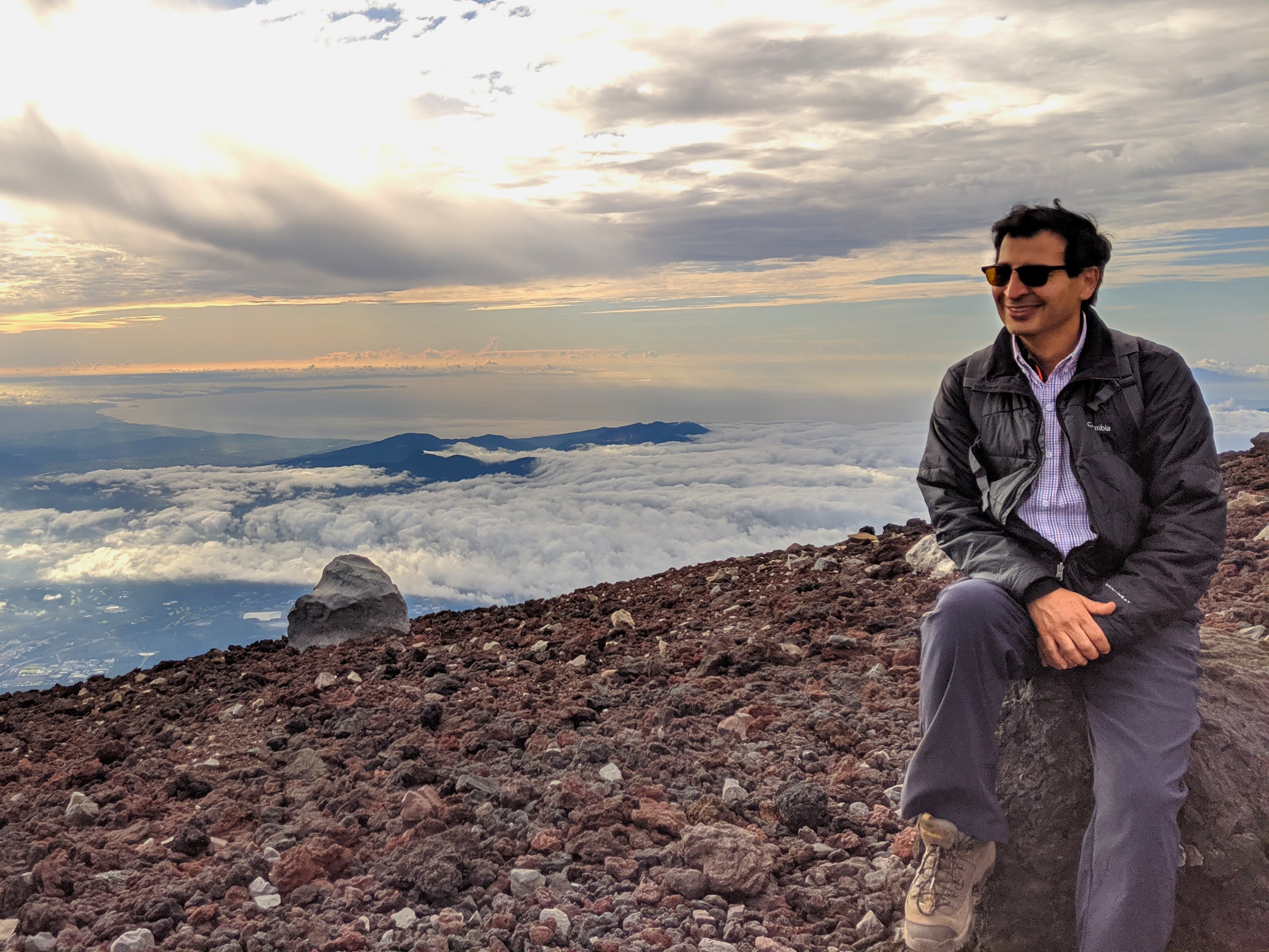 “Curiosity about how the whole world works has been with me since childhood,” Loghmani explained. “When people ask me to describe myself, I tell them I’m eternally curious.”

Over the last 20-plus years—thanks to boundless curiosity and a unique talent for problem- solving—Loghmani has built a worldwide reputation as a visionary and innovator, developing next-generation tech products through his startups and as a product development leader at Google, YouTube and now TikTok, where he leads brand advertising solutions as director of product management.

And physics lies at the heart of everything he does.

“A lot of people ask me what physics has to do with what I do,” Loghmani explained. “Physics is broadly about learning how to solve problems with a degree of precision necessary for the problem at hand. And when you are solving a technology problem or solving a product problem for your customers, these are things you need to know.”

The complexities of physics captured Loghmani’s interest early on.

“In middle school, I didn’t want to do physics for a while, I wanted to be a surgeon,” Loghmani said. “But then when I was about 11 years old, I read a book I got from my uncle, and I still remember the book was ‘One Two Three . . . Infinity,’” Loghmani said. “It was about all different aspects of physics and the math behind physics and that just got me hooked. That’s when I decided to study physics.”

Loghmani focused on physics and math in high school and then left Iran for the U.S., thanks to a professor he knew at the State University of New York who helped him get a student visa to study physics and electrical engineering there. A self-taught programmer, Loghmani soon found himself balancing his college classes with a programming job at Digital Technics, a tech startup that built switches for telecommunications.

“When you’re making phone calls, there’s a switch behind the scenes that’s making the connections, giving you all the services, and they were making that switch,” Loghmani said. “I had already been playing a lot with telecommunications switches, trying to figure out how they work, and that helped me secure the job in the company.”

When Digital Technics moved to the D.C. area, Loghmani moved, too. Still working full time, he transferred to the University of Maryland and zeroed in on physics.

“Coming to College Park, I had access to a whole different caliber of classmates and professors,” he recalled. “I was spending a lot of hallway hours with professors after classes and at one point one of them encouraged me to take an independent study course with him. He actually designed a course just for us to spend time on fractals and chaos in nonlinear systems and I really enjoyed that.”

Soon after Loghmani graduated with his B.S. in physics, he launched his first startup, LogicTree, from a Gateway 2000 computer in his bedroom. The company’s first product was a speech recognition system that could access information and share it over the phone. One of the first customers was Metro, the D.C. area’s transportation system.

“We had built an automated system for them that would talk to callers and give them the information they needed,” Loghmani explained. “Before that, Washington Metro used actual people—an agent would look up your question and say, ‘Oh, you want to go from the National Mall to College Park, here’s which Metro to take, here’s the bus to take,’ and the agent would give you the itinerary over the phone. So we built a system that would give callers all that information automatically.”

In the years that followed, LogicTree sold speech-enabled systems for transit and traffic solutions to transportation agencies all over the country and eventually expanded its speech recognition products into the directory assistance/Yellow Pages technology business, serving customers like AT&T and Verizon. Loghmani had found his calling.

“I realized I enjoyed finding problems, solving them and building companies around them,” he said.

But he also learned there are no guarantees in the world of startups.

“Around 2007, I started a company, ti.ki, with a new idea to automate event planning, which is a very complex problem. That completely flopped,” Loghmani said.

By 2010, realizing he wanted to learn more about product development and marketing, Loghmani enrolled in the Kellogg School of Management at Northwestern University and earned an MBA in marketing and finance two years later. He then relocated to California’s Silicon Valley where he joined the tech-consulting company Accenture and cofounded a group aimed at identifying promising startups and creating partnerships to support innovation.

Meanwhile, he was preparing to launch a new product of his own.

“It was basically speech recognition built into a coin-sized wearable device that you could talk to and ask for information and then it would give you information back on a screen nearby,” Loghmani explained. “You could ask questions and it would connect to Google and do the search. The idea was like ‘Star Trek,’ you could tap and talk.”

As Loghmani started fundraising to launch the product, he found out about the work that tech giants were doing in the same space (Google, Amazon, Apple). So, after some exploration he ended up joining Google. Over the next six years, Loghmani developed a variety of next-generation products including a context-driven system that dramatically changed the way YouTube, part of Google, targeted online ads, initiating more choices for advertisers and less privacy intrusion for users.

“I reinvented how we understand context on YouTube and let advertisers choose where their ad shows, providing advertising revenue that’s not privacy intrusive, it’s contextual,” Loghmani explained. “You see ads based on the content you are watching there, not because of your browsing behavior, and what you have done somewhere else on the web. We started that product literally from zero with one engineer and grew it to hundreds of millions of dollars of revenue in a very short time.”

Starting from zero to create something big is what Loghmani does best.

“I love challenges,” Loghmani said, “and I love to build things from zero to one. You start from scratch and make it happen.”

Even as Loghmani is taking tech innovation to new heights, he still dreams of pursuing a different passion. Someday, he hopes to immerse himself in the study of physics once again.

But he’s not likely to have time for that anytime soon. In 2021, Loghmani took on his latest challenge, joining the new video service TikTok, where he leads brand advertising solutions with a team of product managers in China and the U.S. It was a unique, history-making opportunity he couldn’t pass up.

“TikTok is like Google 10 years ago,” he said. “It has exploded on the scene and that speed of innovation is exciting. TikTok is demonstrating that innovation in the consumer digital space is not a monopoly of American companies like Google, Facebook and Amazon. TikTok demonstrated that a Chinese company can also become globally accepted by consumers and I believe that breaking the barriers makes the world a better place.”

For Loghmani, the magic of innovation and product development in technology never gets old. More than 20 years into a successful career, he’s just getting started—still imagining the possibilities, enjoying the journey and finding inspiration in the challenges along the way.

“I think there is satisfaction in finding a hard problem that you don’t know the answer to but you know it can be solved and attracting smart people to work with you to find a solution,” Loghmani explained. “It’s like a mountaintop. You see the mountaintop but the rest of it is covered in fog. You don’t know how you’re going to get there, but if you keep climbing, then one day you’re at the top. I like to imagine the big mountaintop and tell people, ‘Don’t be afraid of the fog, we’ll find our way.’”