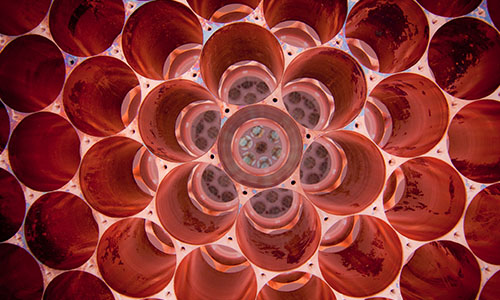 For decades, scientists have suspected that the universe contains more matter than we can see.  They point to clues in the cosmos, such as irregularities in the radiation left over from the early universe and the way light bends around galaxies. By studying the rotation rates of galaxies, pioneering astrophysicists like the late Vera Rubin determined that about 85% of the mass in the universe doesn't betray its presence by emitting any light. For this reason, they named this mysterious mass dark matter.

Researchers from the University of Maryland (UMD), led by Associate Professor Carter Hall, have been blazing the trail in the search for dark matter. Their involvement with the Large Underground Xenon (LUX) experiment—the most sensitive detector of its kind—has placed the most stringent limits yet on the properties of dark matter. And now that LUX has finished taking data, the focus is shifting to the next generation of experiments. An even more sensitive detector called the LUX-ZEPLIN (LZ) experiment is already under construction, and Hall will soon begin a term as the spokesperson for the collaboration.

Since 2013, the LUX collaboration, which includes scientists from the United Kingdom, Portugal and across the United States, has been looking for dark matter in the form of weakly interacting massive particles, or WIMPs. WIMPs are a leading candidate for this mysterious matter, and LUX has been hunting them from an old gold mine in the Black Hills of South Dakota, nearly a mile underground.

The experiment, which consists of a tank with 375 kilograms of ultra-pure liquid xenon and a layer of xenon gas, tries to spot the telltale signs of a WIMP knocking into ordinary matter. Theory predicts that when a WIMP collides with a xenon nucleus, the nucleus will recoil and collide with other nearby xenon atoms. This sets off a chain reaction, liberating electrons from the atoms and releasing ultraviolet light in the process.

LUX sits and waits for this light. Photomultiplier tubes, which act like simple cameras, line the top and bottom of the tank, eyes peeled for quick flashes. An electric field corrals the free electrons toward the top of the tank, and they produce more light when they leap into the layer of xenon gas. These signals tell the researchers where in the detector the WIMP collision occurred. The researchers chose to use xenon in the LUX and LZ experiments because the xenon nucleus is very likely to interact with WIMPs. "It's also not too expensive," says Hall. "You can buy many tons of it."

The experiment must reject false signals, which requires exquisite control. For example, the team worked hard to shield the experiment from cosmic rays—the steady stream of particles from outer space that pass through your body 30 times every second. The mile of bedrock above the mine shields the experiment from these particles, as does a 6-meter- high tank of ultra-pure water surrounding the xenon. They also take care to use detector materials that don't spit out WIMP impostors like neutrons through radioactive decay.

Hall and his UMD collaborators played crucial roles in the LUX collaboration. They provided a source of tritium, a radioactive isotope of hydrogen, to help calibrate the detector. They also built a system to screen the detector material—liquid xenon— for impurities. Richard Knoche, one of Hall's graduate students, recently defended his Ph.D. thesis on how to analyze data from LUX given that its electric field is not uniform.

Different dark matter theories predict different properties for WIMPs, and no one knows how massive WIMPs are or how likely they are to react with ordinary matter. But every dark matter detector scientists build is more sensitive than its predecessor, and progress means putting stricter and stricter limits on the possible masses and interactions strengths a WIMP could have.

After an initial experimental run in 2013, the LUX team has continued to update the experiment, making it four times more sensitive to most WIMP masses. The collaboration did not identify any nuclear recoils due to WIMPs in their 2016 data, which confirms the findings reported by other dark matter searches.

The lack of observed WIMP events makes the continuing work in dark matter detectors even more important, and the next-generation LZ experiment will be 100 times more sensitive than LUX. It will be so sensitive, in fact, that it should be able to detect the constant stream of tiny and nearly massless neutrinos streaming toward us from the sun. Hall says that detecting this neutrino wind will be compelling evidence that LZ is functioning properly.

If LZ sees the neutrino wind and still doesn't spot any WIMPs, it could mean that a new approach to detecting dark matter is needed. Scientists have proposed other theories of what dark matter is, including another particle called the axion, and they may shift toward exploring those theories more seriously if LZ exhausts the search for WIMPs. The lack of discoveries from the Large Hadron Collider that would support the WIMP hypothesis has also caused scientists to take a step back and re-examine their theories on dark matter.

But if researchers are getting close to finishing the search for WIMPs, then LZ will play an important role in taking that those last steps. "There's another, at least, ten years of WIMP experiments that are now planned to be carried out," Hall says. The LZ detector, which is scheduled to start taking data in 2020, may provide the final word on many lingering questions surrounding dark matter.

More information about the LUX and LZ experiments can be found at http://luxdarkmatter.org/ and http://lz.lbl.gov/, respectively.