Nine sources of extremely high-energy gamma rays have been identified in a new catalog compiled by researchers with the High-Altitude Water Cherenkov (HAWC) Gamma-Ray Observatory, including nine University of Maryland physicists. All nine sources produce gamma rays with energies over 56 trillion electron volts (TeV)—more than eight times the energy of the most powerful proton beams produced at particle accelerators on Earth—and three emit gamma rays extending to 100 TeV and beyond, making these the highest-energy sources ever observed in our galaxy. The catalog helps to explain where the particles originate and how they are produced with such extreme energies. 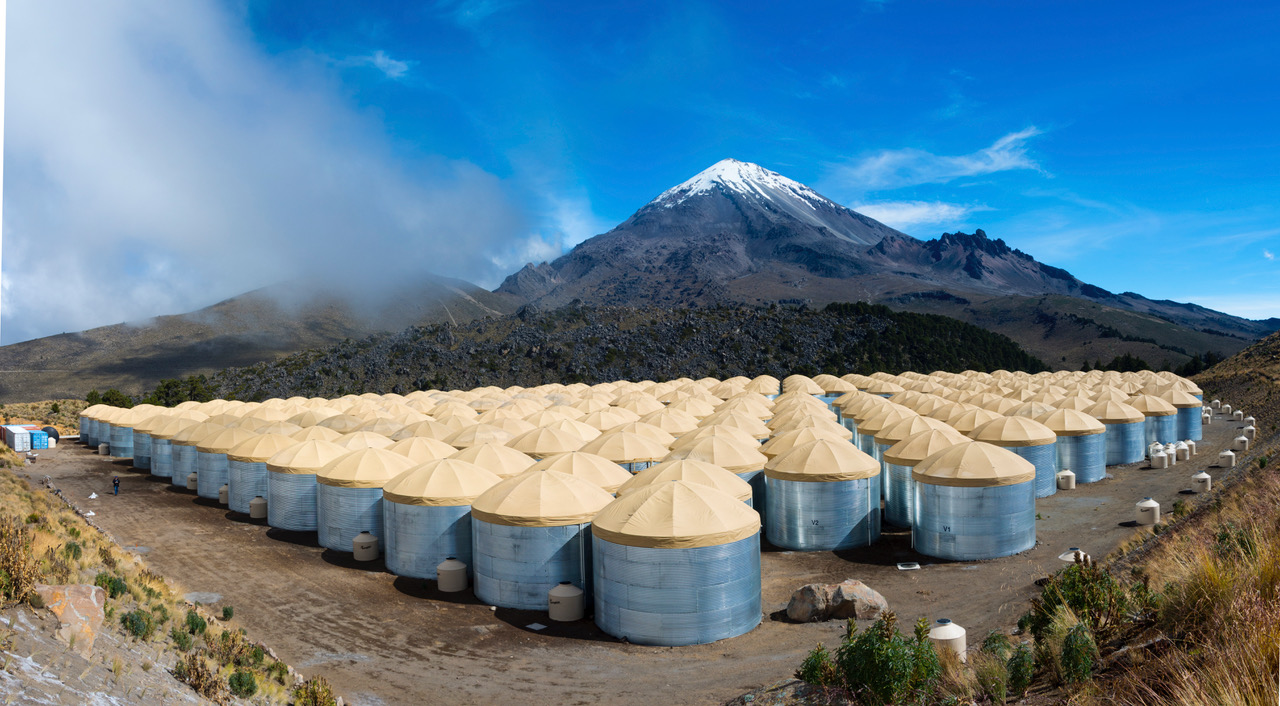 “The very high-energy gamma rays we detect are produced by interactions of even higher energy charged particles near their source,” said Jordan Goodman, a Distinguished University Professor of Physics at UMD and U.S. lead investigator and spokesperson for the HAWC collaboration.  “Charged particles are bent in the magnetic fields of our galaxy and don’t point back to their origin. Gamma rays, like light, travel in straight lines allowing us to use them to map the sources of the high-energy emission. HAWC, which is a wide field-of-view instrument, views the overhead sky 24/7 giving us a deep exposure to look for the rare high energy gamma ray events.”

The catalog of high-energy sources was published online in the journal Physical Review Letters on Jan. 15, 2020.  Higher-energy astrophysical particles have previously been detected, but this is the first time specific galactic sources have been pinpointed for such high-energy particles. All of the sources have extremely energetic pulsars nearby. The number of sources detected may indicate that ultra-high-energy emission is a generic feature of powerful particle winds coming from pulsars embedded in interstellar gas clouds known as nebulae, and that more detections will be forthcoming.

The HAWC Gamma-Ray Observatory consists of an array of water-filled tanks sitting high on the slopes of the Sierra Negra volcano in Puebla, Mexico, where the atmosphere is thin and offers better conditions for observing gamma rays. When gamma rays strike molecules in the atmosphere they produce showers of energetic particles. Nothing can travel faster than the speed of light in a vacuum, but in water light moves a little slower. As a result, some particles in cosmic ray showers travel faster than light in the water inside the HAWC detector tanks. The faster-than-light particles, in turn, produce characteristic flashes of light called Cherenkov radiation. Using recordings of the Cherenkov flashes in the HAWC water tanks, researchers reconstruct the sources of particle showers and learn about the particles that caused them.

The HAWC collaborators plan to continue searching for the sources of high-energy cosmic rays. By combining their data with measurements from other types of observatories, such as neutrino, X-ray, radio and optical telescopes, they hope to elucidate the astrophysical mechanisms that produce the cosmic rays that continuously rain down on our planet.

“There are still many unanswered questions about cosmic-ray origins and acceleration,” said Kelly Malone, an astrophysicist in the Neutron Science and Technology group at Los Alamos National Laboratory and a member of the HAWC scientific collaboration. “High energy gamma rays are produced near cosmic-ray sites and can be used to probe cosmic-ray acceleration. However, there is some ambiguity in using gamma rays to study this, as high-energy gamma rays can also be produced via other mechanisms, such as lower-energy photons scattering off of electrons, which commonly occurs near pulsars.”

Text for this news item was adapted with permission from a press release written by Los Alamos National Laboratory.

The National Science Foundation, the U.S. Department of Energy and Los Alamos National Laboratory provided funding for the United States’ participation in the HAWC project. The Consejo Nacional de Ciencia y Tecnología (CONACyT) is the primary funder for Mexican participation. The content of this article does not necessarily reflect the views of these organizations.

Media Relations Contact: Bailey Bedford, 301-405-9401, This email address is being protected from spambots. You need JavaScript enabled to view it.