Peeking into a World of Spin-3/2 Materials

Researchers have been pushing the frontiers of the quantum world for over a century. And time after time, spin has been a rich source of new physics.

Spin, like mass and electrical charge, is an intrinsic property of quantum particles. It is central to understanding how quantum objects will respond to a magnetic field, and it divides all quantum objects into two types. The half-integer ones, like the spin-1/2 electron, refuse to share the same quantum state, whereas the integer ones, like the spin-1 photon, don’t have a problem cozying up together. So, spin is essential when delving into virtually any topic governed by quantum mechanics, from the Higgs Boson to superconductors. 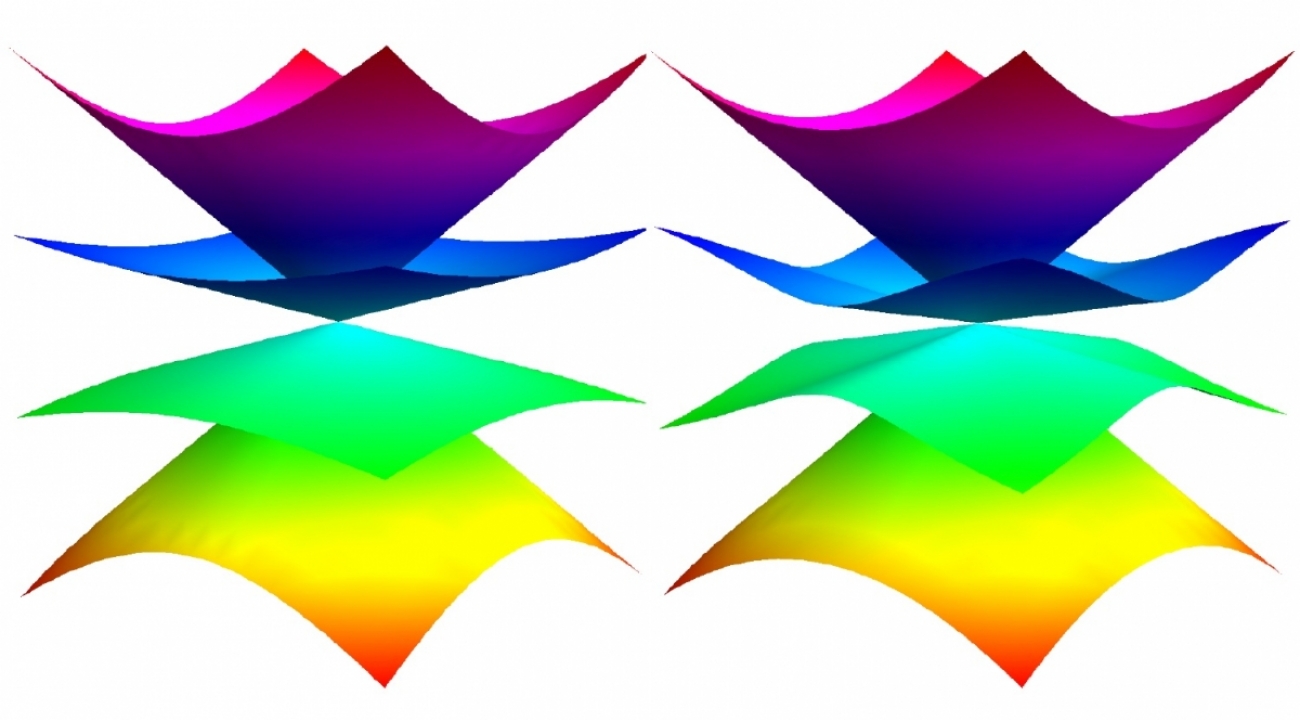 In a material, the momentum and energy of an electron are tied together by a “dispersion relation” (pictured above). This relationship influences the electrons’ behavior, sometimes making them behave as particles with different quantum properties. (Credit: Igor Boettcher/University of Maryland)

Yet after almost a century of playing a central role in quantum research, questions about spin remain. For example, why do all the elementary particles that we know about only have spin values of 0, 1/2, or 1? And what new behaviors might exist for particles with spin values greater than 1?

The first question may remain a cosmic mystery, but there are opportunities to explore the second. Inside of a material, a particle’s surroundings can cause it to behave like it has a new spin value. In the past couple years, researchers have discovered materials in which electrons behave like their spin has been bumped up, from 1/2 to 3/2. UMD postdoctoral researcher Igor Boettcher of the Joint Quantum Institute explored the new behaviors these spins might produce in a recent paper featured on the cover of Physical Review Letters.

Instead of looking at a particular material, Boettcher focused on the math that describes interactions between spin-3/2 electrons at low temperatures. These electrons can interact in more ways than their mundane spin-1/2 counterparts, which unlocks new phases—or collective behaviors—that researchers can look for in experiments. Boettcher sifted through the possible phases, searching for the ones that are likely to be stable at low temperatures. He looked at which phases tie up the least energy in the interactions, since as the temperature drops a material becomes most stable in the form containing the least energy (like steam condensing into liquid water and eventually freezing into ice).

He found three promising phases to hunt for in experiments. Which of these phases, if any, arise in a particular material will depend on its unique properties. Still, Boettcher’s predictions provide researchers with signals to keep an eye out for during experiments. If one of the phases forms, he predicts that common measurement techniques will reveal a signature shift in the electrical properties.

Boettcher’s work is an early step in the exploration of spin-3/2 materials. He hopes that one day the field might be comparable to that of graphene, with researchers constantly racing to explore new physics, produce better quality materials, and identify new transport properties.

“I really hope that this will develop into a big field, which will require both experimentalists and the theorists to do their part so that we can really learn something about the spin-3/2 particles and how they interact.” says Boettcher. “This is really just the beginning right now, because these materials just popped up.”