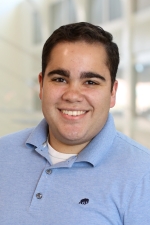 Brian Clark works on particle astrophysics, specifically high-energy neutrino astronomy. He received his PhD from The Ohio State University in 2019, where he was a National Science Foundation (NSF) Graduate Research Fellow. At OSU, he worked on the Askaryan Radio Array (ARA) experiment, which seeks to observe the highest energy neutrinos (above 10 PeV) through the radio detection technique. He worked on all aspects of the experiment, spanning data analysis, simulation, and detector development, including a deployment to the South Pole. After completing his PhD, he became a National Science Foundation Astronomy and Astrophysics Postdoctoral Fellow at Michigan State University. At MSU, he expanded his experimental efforts to include the IceCube Neutrino Observatory. His current efforts include work on ARA, IceCube, and next generation observatories like the Radio Neutrino Observatory in Greenland (RNO-G) and IceCube-Gen2. He currently serves as co-convener of the IceCube Diffuse Neutrino Group and as analysis co-coordinator for ARA.