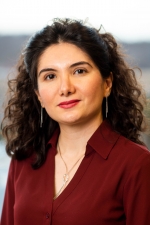 Dr. Zohreh Davoudi received her B.Sc. in 2007 and M.Sc in 2009 from Sharif University of Technology in Tehran, Iran. She then moved to the US to continue her studies in Theoretical Physics. She received her Ph.D. in 2014 from the University of Washington in Seattle, and shortly thereafter joined the Massachusetts Institute of Technology's Center for Theoretical Physics as a post-doctoral research associate. In addition to her UMD appointment, Davoudi will also be affiliated with the RIKEN research program until 2021. She studies strongly interacting systems, such as hadrons and nuclei, using analytical and computational methods including effective field theories, lattice quantum chromodynamics, quantum simulation and quantum computing.
Awards and recognitions:
Alfred P. Sloan Fellowship (2019)
Department of Energy's Early Career Award (2019)
Kenneth Wilson Award in Lattice Gauge Theory (2018)

1) Developing and applying effective field theories and lattice quantum chromodynamics (LQCD) technique aiming at: i) A reliable determination of nuclear and hypernuclear few-body interactions to supplement experimental nuclear-physics programs worldwide, such as the facility for rare isotope beams (FRIB), and to refine studies of extreme astrophysical environment, such as the interior of neutron stars. ii) Constraining hadronic contributions to Standard Model and beyond-the-Standard Model processes, with an impact on both low-energy nuclear physics and high-energy particle physics research, removing some of the long-standing uncertainties in reactions such as those occurring in sun or in fusion research facilities, the cross section of various dark-matter candidates scattering off heavy nuclei in experiments, and the rate of exotic processes such as the neutrinoless double-beta decay.

2) Developing and benchmarking frameworks for quantum simulation of lattice gauge theories and nuclear effective field theories, in light of rapid progress in quantum-computing technologies worldwide. A long-term goal of this research is to combat the long-standing sign problem inherent in traditional Monte Carlo computations of fermionic systems (relevant for studies of dense matter in nature) and real-time dynamics of strongly-interacting matter (relevant for studies of the evolution of matter after Big Bang or after the collision of heavy nuclei in experiments). This problem can potentially be eliminated through mapping and tracking the dynamics of the systems on a quantum simulator. Both the algorithmic developments for efficient implementations of the problems on near-term and future digital quantum-computing platforms, as well as accurate engineering of Hamiltonians of controlled quantum systems for implementations on analog quantum simulators (e.g., ion-trap platforms) are pursued for benchmark problems