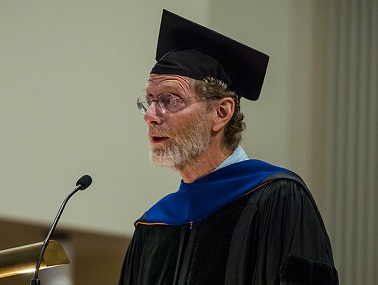 Ted Jacobson has been named a University of Maryland Distinguished University Professor. This designation is the campus’ highest academic honor, reserved for those whose scholarly achievements “have brought distinction to the University of Maryland.” He was cited for his highly innovative work in black hole thermodynamics, the nature of spacetime, and gravitational physics.

Jacobson is a member of the Maryland Center for Fundamental Physics and the Joint Space-Science Institute and a Fellow of the American Association for the Advancement of Science and of the American Physical Society. He was an invited speaker at Stephen Hawking’s 75th birthday conference in 2017, where he spoke on "Hawking radiation, infinite redshifts, and black hole analogues”.

He is a UMD Distinguished Scholar-Teacher, and he co-developed the College Park Scholars Program Science, Discovery and the Universe.

His work has been featured in the lay press, including The Economist and Salon.com. He has written for Scientific American, including a cover story, “Echoes of Black Holes”.  In 2010, the New York Times published a feature story on gravity and highlighted Jacobson’s 1995 paper “Thermodynamics of Spacetime: The Einstein Equation of State”.  This paper showed that Einstein's equation for the curvature of spacetime derives from thermodynamic principles applied to entanglement entropy of the quantum vacuum. The idea was inspired by black hole thermodynamics, one of his main research foci. His other research interests have included laboratory analogs of black holes, astroparticle and gravitational tests of relativity, and relativistic plasma physics.