Blessing the World With More Leons

On a warm June afternoon in 2022, a group of friends, family members and former coworkers gathered around a Bradford pear tree outside NASA’s Goddard Space Flight Center to remember a physicist named Leon Herreid. Herreid studied physics as a Ph.D. student at the University of Maryland and worked at NASA Goddard for 16 years before he died suddenly at age 40 in 1994.

Months after Herreid’s death, his widow Judy created the memorial, planting “Leon’s tree” and placing a brass plaque below it in one of the couple’s favorite spots—the baseball field where they used to play and drink beer in the summertime with NASA Goddard’s co-ed softball team. Along with the memorial, Judy launched a quirky tradition inspired by Leon himself.

“Years ago, I said to my sister-in-law, ‘I’m going to the tree, do you have any beer?’ What she had was something called Dead Guy Ale, so that’s what I take every time,” Judy explained. “Leon liked beer and he would think this was the funniest, most appropriate thing ever. I always tell any friend, ‘When you go to the memorial, be sure to pour a beer on him.’”

Meanwhile, at the University of Maryland, Judy and her family have been honoring Leon’s legacy in a very different way. In 1995, Leon’s father, Paul Herreid, launched the Leon A. Herreid Science Graduate Fellowship Award for physics graduate students at UMD working in space science, with preference given to those affiliated with NASA Goddard.

“Paul was a giving philanthropist who really believed in education,” Judy explained. “He said he started those scholarships so we could create more Leons.”

In 2021, Judy took her father-in-law’s mission a step further, establishing the Leon A. Herreid Current-Use Undergraduate Student Support Fund in Physics, a scholarship to support summer internships for undergraduate space science students at UMD, again with preference for those working with NASA Goddard.

“Someone else came up with this idea and I liked that,” Judy said. “It was just another way to bless the world with more Leons.” 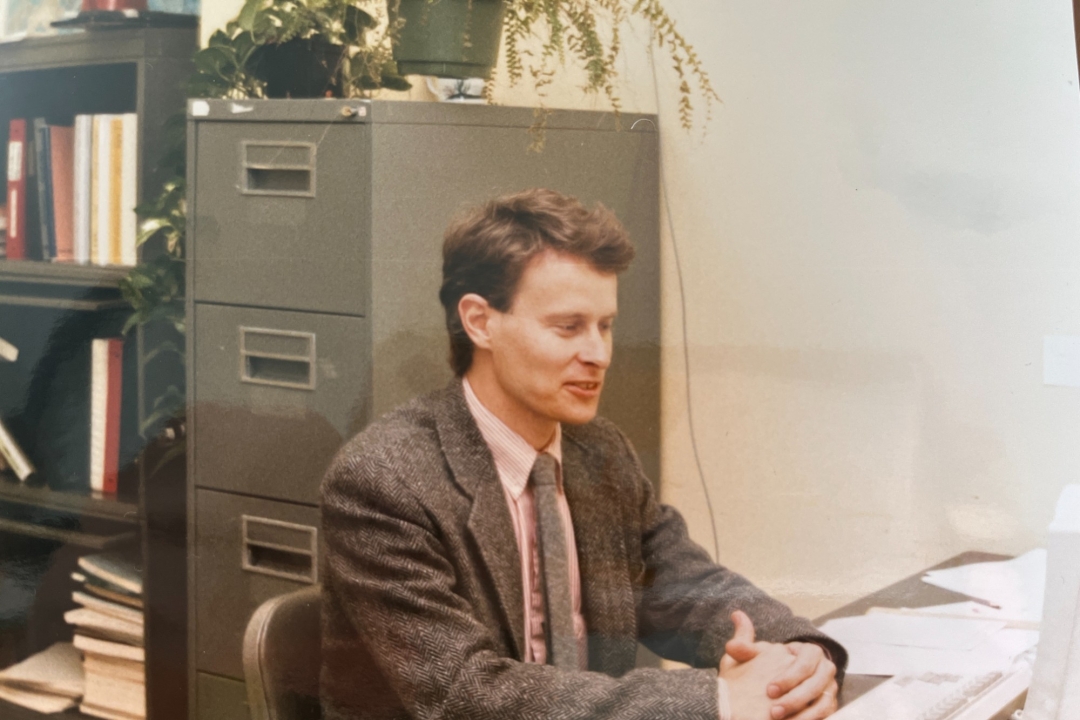 Leon with Judy, Hannah and Noah

Judy—she was Judy Schwartz back then, also an employee of STX—still remembers the day she met Leon at a work event three decades ago.

“I remember seeing him in the kitchen and he was eating an anchovy sandwich and I thought, ‘Ugh, how disgusting. Who is this person?’” she laughed. “He had a rat tail and he was a bad dresser, people knew him for that. So, I wasn’t all that impressed.”

But as she got to know Leon better, she realized there was much more to this space scientist than she ever could have imagined.

“He was a true geek. I loved that. He was brilliant and also well rounded,” Judy recalled. “It wasn’t just space that he loved most—it was the computers, the problem-solving. I’d say, ‘Talk smart to me’ and he’d tell me about the universe. He just had a passion for science and that world.”

The couple married and had two children, Hannah and Noah. And like everything else Leon did, his parenting style was grounded in science.

“Leon would stand in the closet when Hannah was a baby trying to get her to go to sleep. He’d be in there holding her and reciting the periodic table,” Judy explained. “He didn’t know nursery rhymes or anything, so this is what he would do, and it would calm her every time. Best dad ever.”

Meanwhile, Leon was climbing the ladder at NASA, working on major missions including Landsat COBE and XTE gaining the respect of those around him. That included Nobel Laureate John Mather, a College Park Professor of Physics and senior scientist at NASA who has remained friendly with Judy and her children for more than 25 years.

Hannah and Noah are adults now. And thanks to events like the June memorial for Leon, Judy is getting to know another inspiring group of young people—the recipients of her family’s scholarships and fellowships. That includes physics Ph.D. student Lucas Smith, who received the Leon A. Herreid Science Graduate Fellowship in May 2022.

“Lucas reminded me so much of Leon,” Judy said. “The science thing was kind of how he breathed, and he was just so appreciative of the fellowship.”

For Smith, whose research centers on developing the next generation of gamma-ray telescopes, the Herreid Fellowship provides welcome support as he continues to work toward his Ph.D.

“I am incredibly grateful to have had this opportunity. Any amount of financial assistance goes a long way to alleviate the cost-of-living expenses that graduate students have,” Smith explained. “It is really touching to know that the Herreid family is willing to extend their support.”

Like Smith, Emma Kleiner (B.S. ’22, physics and astronomy) attended the June memorial as well. Kleiner is the first student to receive support from the Leon A. Herreid Undergraduate Student Support Fund in Physics. The funding allowed her to spend the summer of 2022 completing her research with NASA astrophysicist Antara Basu-Zych.

“My work at NASA Goddard involves studying interacting and colliding galaxies using Swift X-ray data,” Kleiner explained. “By observing and identifying X-ray sources we can better understand the triggering or quenching of star formation in galaxies. Receiving this support from the Herreid scholarship has meant the world to me.”

For Judy, supporting these future “Leons” is the kind of tribute she thinks her late husband would truly appreciate, keeping his spirit and his love for physics alive now and for many years to come.

“Talking about him and the scholarship, it keeps him alive,” she reflected. “Leon and his siblings didn’t have a dime in student loans; their father Paul helped them and kept giving to education to support others, and I think Leon would be proud to continue that, to give people that opportunity.”