Sylvester James Gates, Jr., a member of the National Academy of Sciences and recipient of the National Medal of Science, will rejoin the University of Maryland faculty on July 1, 2022. He will hold the Clark Leadership Chair in Science and a joint appointment in the Department of Physics and the School of Public Policy. He will also hold the titles of Distinguished University Professor and Regents Professor.

“Jim Gates is a truly legendary figure in science and education. His lifelong fascination with fundamental physics has inspired generations of students and scientists worldwide,” said Amitabh Varshney, dean of UMD’s College of Computer, Mathematical, and Natural Sciences. “We’ve benefited from his counsel and advocacy for nearly 40 years, and we are delighted that our faculty members and students will continue to have opportunities to interact with him here at the University of Maryland.”

Gates is well-known for his seminal work in supersymmetry, supergravity and string theory. He has made milestone discoveries in the mathematics of particle theory and the geometry of gravity. In addition to his research achievements, Gates also distinguished himself as a powerful advocate for education and a charismatic ambassador for American science around the world.

“The University of Maryland, College Park has been the main secret sauce turbo-charging my professional activities and I am looking forward to this once more!” Gates said.

In 2011, Gates received the National Medal of Science “for contributions to the mathematics of supersymmetry in particle, field, and string theories and extraordinary efforts to engage the public on the beauty and wonder of fundamental physics.” He served on the President’s Council of Advisors on Science and Technology (PCAST) under Barack Obama and was the vice president of the Maryland State Board of Education.

“Professor Gates has applied his knowledge and research to great effect in the policy arena,” said Robert Orr, dean of UMD’s School of Public Policy. “He has also been instrumental in educating our students about the crucial nexus between science and technology and the policy world.”

Gates was a faculty member in UMD’s Department of Physics from 1984 until 2017 and maintained ties since then as a College Park Professor of Physics. Since 2017, he also held appointments at the Massachusetts Institute of Technology, Howard University, Dartmouth College and Brown University.  He has also served as president of both the National Society of Black Physicists and the American Physical Society.

“Having Jim Gates return is a boon to our entire campus,” said Steve Rolston, chair of UMD’s Department of Physics. “His international stature as an educator and science proponent is particularly crucial in our current times.”

The Clark Leadership Chair in Science that Gates will hold was established through the A. James & Alice B. Clark Foundation’s Building Together: An Investment for Maryland. 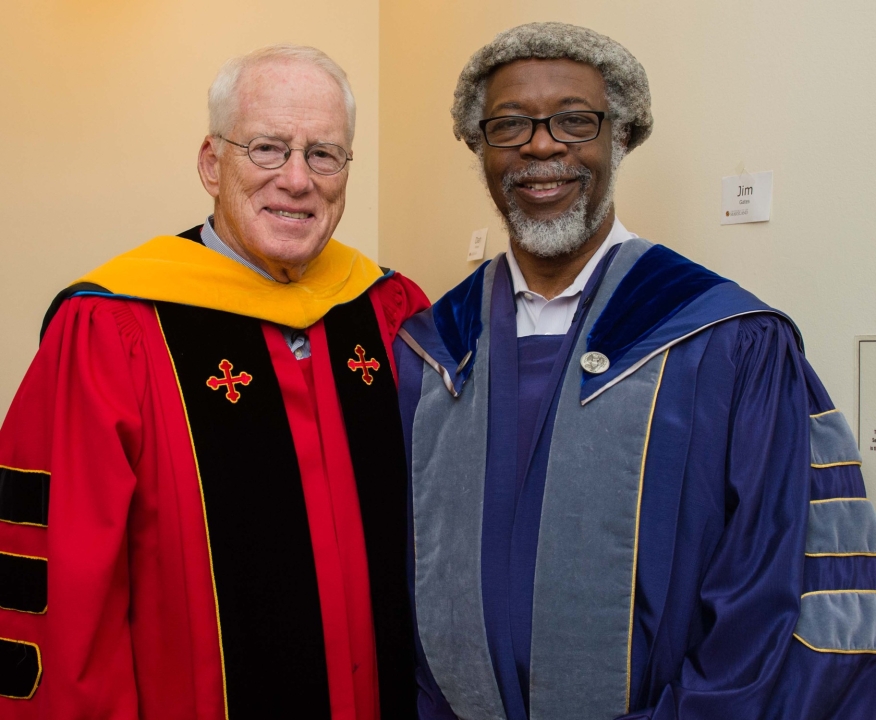 Brit Kirwan and Jim Gates at the 2016 UMD Convocation.

With Richard Prange at Gates' Distinguished Scholar-Teacher Lecture in 2002.