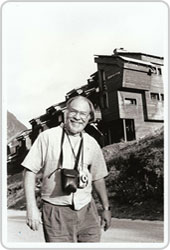 The prize, which carries a $10,000, honorarium, was made possible by the generosity of Dr. Prange’s wife, Dr. Madeleine Joullié of the University of Pennsylvania.

Recipients of the Prange Prize:

Until his retirement in 2000, he played a vital role in the life of the Physics department. He led a substantial reform of its undergraduate major program and served energetic and innovative terms as chair of crucial departmental entities, including the Salary, Priorities, and Appointment, Promotion and Tenure committees. His was an important and highly-respected voice in all departmental deliberations.

Dr. Prange was the editor of a well-known book on the Quantum Hall Effect, but his interests reached well beyond condensed matter, into every substantive aspect of theoretical physics, including some pioneering work on quantum chaos. He was at complete ease discussing subjects as disparate as ferromagnetism and the cosmological constant. His interests also included history and travel.