These days, movies and video games render increasingly realistic 3-D images on 2-D screens, giving viewers the illusion of gazing into another world. For many physicists, though, keeping things flat is far more interesting.

One reason is that flat landscapes can unlock new movement patterns in the quantum world of atoms and electrons. For instance, shedding the third dimension enables an entirely new class of particles to emerge—particles that that don’t fit neatly into the two classes, bosons and fermions, provided by nature. These new particles, known as anyons, change in novel ways when they swap places, a feat that could one day power a special breed of quantum computer.

But anyons and the conditions that produce them have been exceedingly hard to spot in experiments. In a pair of papers published this week in Physical Review Letters, JQI Fellow Alexey Gorshkov and several collaborators proposed new ways of studying this unusual flat physics, suggesting that small numbers of constrained atoms could act as stand-ins for the finicky electrons first predicted to exhibit low-dimensional quirks.

"These two papers add to the growing literature demonstrating the promise of cold atoms for studying exotic physics in general and anyons in particular," Gorshkov says. "Coupled with recent advances in cold atom experiments—including by the grou 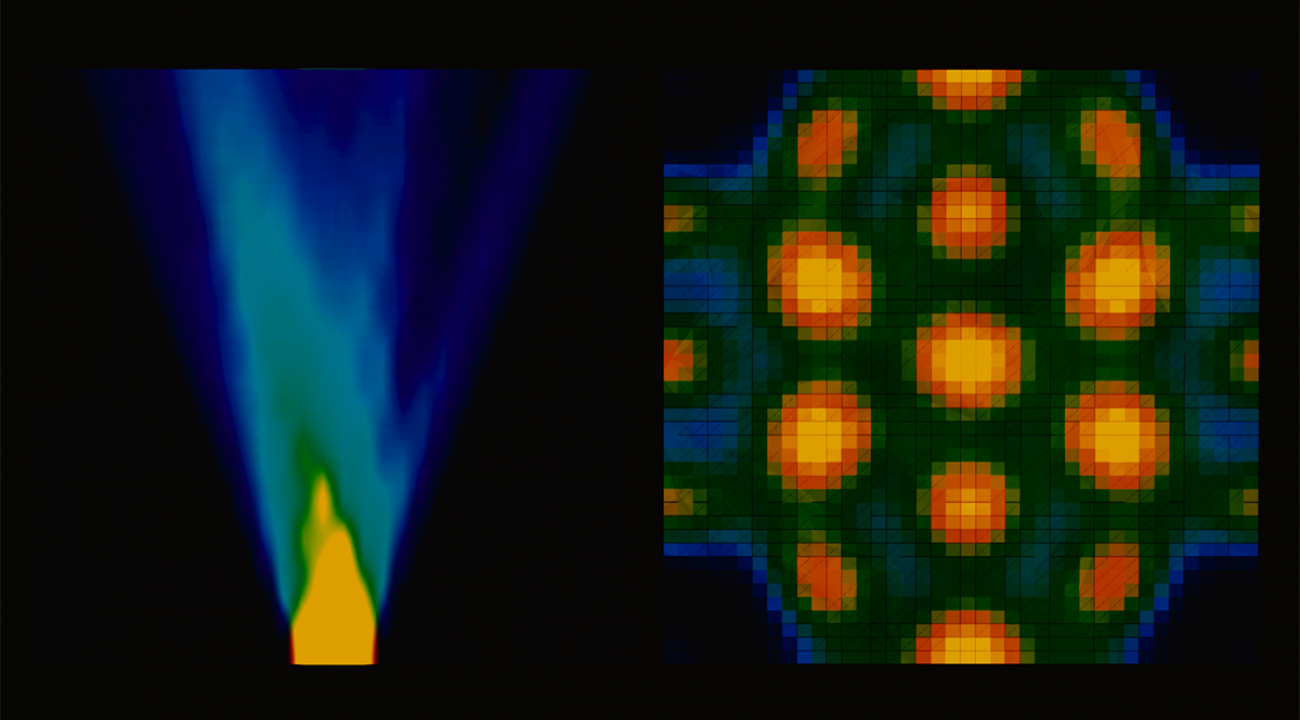 Simulated images from two papers showing anyons spreading preferentially to the left in a 1-D grid (left) and a novel phase of matter that may arise from atoms constrained to move in 2-D (right). (Images courtesy of the authors)p of Ian Spielman at JQI—this work hints at exciting experimental demonstrations that might be just around the corner."

In the first paper, which was selected as an Editors’ Suggestion, Gorshkov and colleagues proposed looking for a new experimental signature of anyons—one that might be visible in a small collection of atoms hopping around in a 1-D grid. Previous work suggested that such systems might simulate the swapping behavior of anyons, but researchers only knew of ways to spot the effects at extremely cold temperatures. Instead, Fangli Liu, a graduate student at JQI, along with Gorshkov and other collaborators, found a way to detect the presence of anyons without needing such frigid climes.

Ordinarily, atoms spread out symmetrically over time in a 1-D grid, but anyons will generally favor the left over the right or vice versa. The researchers argued that straightforward changes to the laser used to create the grid would make the atoms hop less like themselves and more like anyons. By measuring the way that the number of atoms at different locations changes over time, it would then be possible to spot the asymmetry expected from anyons. Furthermore, adjusting the laser would make it easy to switch the favored direction in the experiment.

"The motivation was to use something that didn’t require extremely cold temperatures to probe the anyons," says Liu, the lead author of the paper. "The hope is that maybe some similar ideas can be used in more general settings, like looking for related asymmetries in two dimensions."

In the second paper, Gorshkov and a separate group of collaborators found theoretical evidence for a new state of matter closely related to a Laughlin liquid, the prototypical example of a substance with topological order. In a Laughlin liquid, particles—originally electrons—find elaborate ways of avoiding one another, leading to the emergence of anyons that carry only a fraction of the electric charge held by an electron.

"Anyons are pretty much still theoretical constructs," says Tobias Grass, a postdoctoral researcher at JQI and the lead author of the second paper, "and experiments have yet to conclusively demonstrate them."

Although fractional charges have been observed in experiments with electrons, many of their other predicted properties have remained unmeasurable. This makes it hard to search for other interesting behavior or to study Laughlin liquids more closely. Grass, Gorshkov and their colleagues suggested a way to manipulate the interactions between a handful of atoms and discovered a new state of matter that mixes characteristics of the Laughlin liquid and a less exotic crystal phase.

The atoms in this new state avoid one another in a similar way as electrons in a Laughlin liquid, and they also fall into a regular pattern like in a crystal—albeit in a strange way, with only half of an atom occupying each crystal site. It’s a unique mix of crystal symmetry and more complex topological order—a combination that has received little prior study.

"The idea that you have a bosonic or fermionic system, and then from interactions there emerges completely different physics—that’s only possible in lower dimensions," Grass says. "Having an experimental demonstration of any of these phases is just interesting from a fundamental perspective."