Currie to Send Next Gen Retroreflectors to Moon

In 1969, University of Maryland physicist Doug Currie helped design three still-in-use lunar instruments placed on the moon by Apollo 11, 14 and 15. Fifty years later, Currie is lead scientist for a just-approved NASA project to place next-generation versions of these instruments on the Moon.

Known as lunar retroreflectors, the instruments reflect laser pulses sent from Earth back to their exact origin point, allowing precise measurements of the Earth-moon distance; providing data to better understand aspects of the moon’s interior, including its liquid core; testing questions of fundamental physics, and allowing better mapping and navigation of the lunar surface.

According to Currie, a senior research scientist and professor emeritus at the University of Maryland, the new UMD-led project can lead to improvements in all of these research areas: (1) because of the hundred fold improvement in the accuracy of individual ranges using the new retroreflectors and (2) by the increased accuracy produced by a larger number of reflectors with a wider lunar area covered by the network.  Currently, there are five retroreflectors on the moon: the three placed by Apollo missions and two French-designed instruments placed by Soviet lunar missions. The Currie-led proposal would add three Next Generation Retroreflectors for a total of eight lunar retroreflector arrays.

“Our Next Generation Lunar Retroreflector is a 21st Century version of the instruments currently on the Moon. Each placement of a Next Generation lunar laser ranging array will greatly enhance the scientific and navigational capabilities of retroreflector network,” said Currie. “These additions improve the mapping and navigation capabilities important for NASA’s plans to return to the Moon and by 2028 establish a sustained human presence.”

“And these also will significantly boost scientists’ ability to use the network to conduct important science, such as new tests of general relativity and other theories of gravity. Such studies may help us understand the nature of mysterious dark matter, which appears to constitute almost 27 percent of the Universe,” he said.

According to a NASA release, the Next Generation Lunar Retroreflectors (NGLR) is one of 12 new science and technology payloads selected by the agency to help humans study the Moon and explore more of its surface as part of the NASA’s Artemis lunar program. The agency says the retroreflector and the other 11 investigations and demonstrations “will help the agency to send astronauts to the Moon by 2024 as a way to prepare to send humans to Mars for the first time.”

The selected investigations will go to the Moon on future flights through NASA's Commercial Lunar Payload Services (CLPS) project. According to the agency, the CLPS project allows rapid acquisition of lunar delivery services for payloads like these that advance capabilities for science, exploration, or commercial development of the Moon.

NASA has selected the first three commercial Moon landing service providers that will deliver science and technology payloads to the lunar surface. According to Currie, the Next Generation Retroreflectors are not currently scheduled by NASA to be among the payloads carried on those three commercial Moon landings. “However, we believe because of the low size and weight of these retroreflectors, each mission could safely add one to their planned payloads for each of these commercial delivery missions,” he said.

"The selected lunar payloads represent cutting-edge innovations, and will take advantage of early flights through our commercial services project,” said Thomas Zurbuchen, associate administrator of the agency's Science Mission Directorate in Washington. "Each demonstrates either a new science instrument or a technological innovation that supports scientific and human exploration objectives, and many have broader applications for Mars and beyond.”

(Currie was interviewed by ABC News about the 50th anniversary of Apollo 11.) 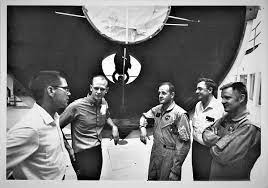 Pictured (L-R) in 1969 are University of Maryland (UMD) physicist Doug Currie, University of Texas (UT) McDonald Observatory Director Harlan J. Smith, NASA Scientist-Astronaut Philip Chapman, UMD Professor of Physics Carroll Alley and NASA Scientist-Astronaut Don L. Lind discussing use of the McDonald Lunar Laser Ranging Observatory (MLLRO) to send short laser pulses to the first Lunar Laser Ranging (LLR) Retroreflector left on the lunar surface by the Apollo 11 Astronauts. The MLLRO program was developed and initially operated by Professor Currie (then associate professor) with the support of the Godard Space Craft Center and the University of Texas. UMD’s Professor Alley was the Principle Investigator of the project to place LLRs on the moon to address lunar physics, gravitation, General Relativity and Earth physics.  The LLR Retroreflectors were designed and developed by a team that in addition to UMD physicists Alley and Currie, included scientists from universities and federal institutions that included Princeton University, NASA Goddard Space Craft Center, the National Bureau of Standards, Wesleyan University and the University of California. NASA’s Scientist-Astronaut program trained Ph.D. scientists & engineers as astronauts. Image courtesy Doug Currie.

Contact: This email address is being protected from spambots. You need JavaScript enabled to view it. 301-405-4679