Topological materials have captured the interest of many scientists and may provide the basis for a new era in materials development. On April 10, 2020 in the journal Science Advances, physicists working with Andreas Elben, Jinlong Yu, Peter Zoller and Benoit Vermersch, including Associate Professor Mohammad Hafezi and former Joint Quantum Institute (JQI) postdoctoral researcher Guanyu Zhu (currently a research staff member at IBM T. J. Watson Research Center), presented a new method for identifying and characterizing topological invariants on various experimental platforms, testing their protocol in a quantum simulator made of neutral atoms.

Quantum simulators are an emerging tool for preparing and investigating complex quantum states. They can be realized in a variety of different physical systems—such as ultracold atoms in optical lattices, Rydberg atoms, trapped ions or superconducting quantum bits—and they promise to enhance 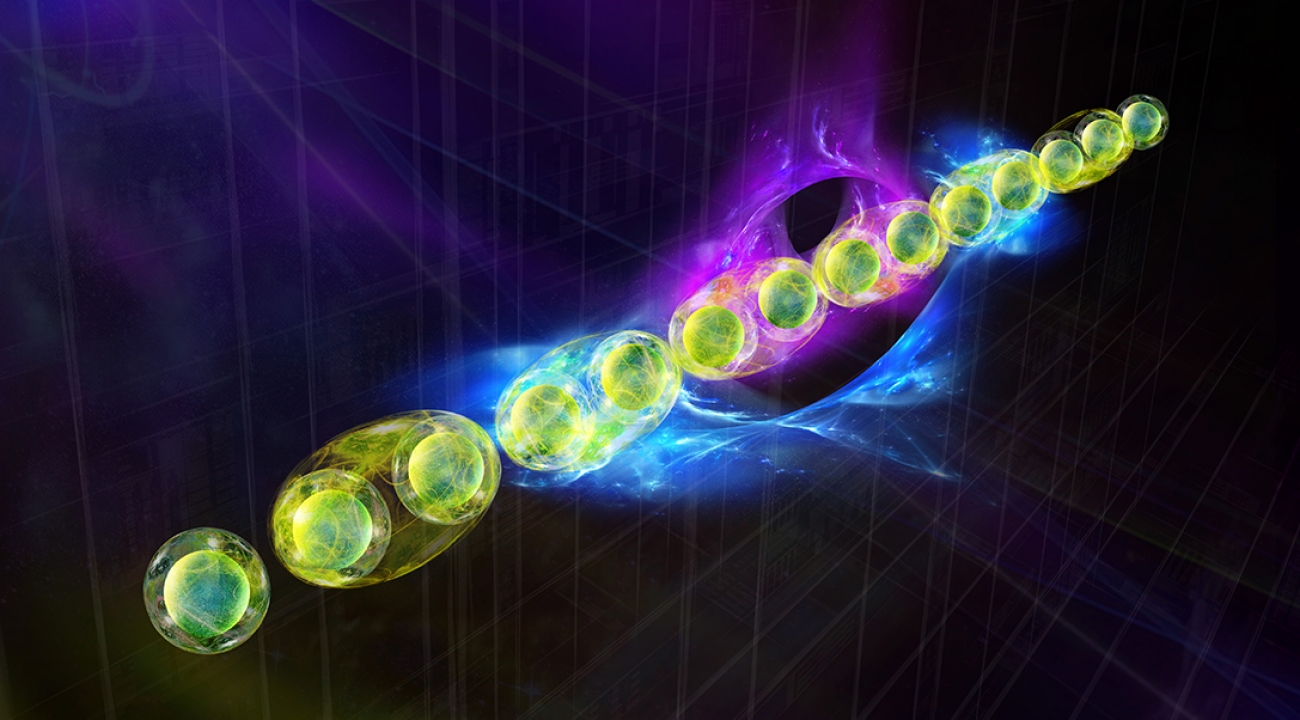 Topological phases of matter are a particularly fascinating class of quantum states. (Credit: Harald Ritsch/IQOQI Innsbruck) the study of exotic states of matter.

In particular, this new breed of simulator may be able to prepare topological states of matter, which researchers find particularly fascinating. In 2016, David Thouless, Duncan Haldane and Michael Kosterlitz were awarded the Nobel Prize in Physics for their theoretical discoveries about topological states. Scientists now know that these states of matter are characterized by nonlocal quantum correlations, making them particularly robust against local distortions that inevitably occur in experiments.

But it’s often hard to know if a material sample in the lab is in a topological phase. "Identifying and characterizing such topological phases in experiments is a great challenge," say Vermersch, Yu and Elben from the Center for Quantum Physics at the University of Innsbruck and the Institute for Quantum Optics and Quantum Information of the Austrian Academy of Sciences. "Topological phases cannot be identified by local measurements because of their special properties. We are therefore developing new measurement protocols that will enable experimental physicists to characterize these states in the laboratory".

In recent years this identification has been achieved for systems without any interactions. However, for interacting systems, which in the future could also be used as topological quantum computers, this has not been possible so far.

In the new work, the research team proposed and experimentally tested protocols that might enable other experimenters to measure topological invariants. These mathematical expressions distinguish different topological phases, making it possible to classify interacting topological states in a wide variety of systems.

The key to the method is that although the topological invariants are highly complex, non-local correlation functions, they can still be extracted from statistical correlations of simple and local random measurements. “The many-body invariants characterizing different types of topological orders are path-integrals in topological quantum field theory, corresponding to various types of space-time manifolds, such as the real-projective plane,” says Zhu. “It is kind of a miracle that we eventually realized that these highly abstract quantities in theory can actually be measured in relatively simple experiments.”

And as some members of the research group have recently shown, such random measurements are possible in experiments today. "Our protocols for measuring the topological invariants can therefore be directly applied in the existing experimental platforms," says Vermersch.

In addition to Elben, Yu, Zoller, Vermersch, Zhu and Hafezi, the co-authors included Frank Pollmann from the Technical University of Munich. The research was financially supported by the European Research Council and the EU flagship for quantum technologies, as well as the Army Research Office MURI program and the NSF Physics Frontier Center at JQI.

This story was originally published by the Institute for Quantum Optics and Quantum Information of the Austrian Academy of Sciences in Innsbruck. It was adapted with permission by the JQI: https://jqi.umd.edu/news/new-protocol-helps-classify-topological-matter