The quantum world blatantly defies intuitions that we’ve developed while living among relatively large things, like cars, pennies and dust motes. In the quantum world, tiny particles can maintain a special connection over any distance, pass through barriers and simultaneously travel down multiple paths.

A less widely known quantum behavior is dynamical localization, a phenomenon in which a quantum object stays at the same temperature despite a steady supply of energy—bucking the assumption that a cold object will always steal heat from a warmer object.

This assumption is one of the cornerstones of thermodynamics—the study of how heat moves around. The fact that dynamical localization defies this principle means that something unusual is happening in the quantum world—and that dynamical localization may be an excellent probe of where the quantum domain ends and traditional physics begins. Understanding how quantum systems maintain, or fail to maintain, quantum behavior is essential not only to our understanding of the universe but also to the practical development of quantum technologies.

“At some point, the quantum description of the world has to changeover to the classical description that we see, and it's believed that the way this happens is through interactions,” says UMD postdoctoral researcher Colin Rylands of the Joint Quantum Institute. 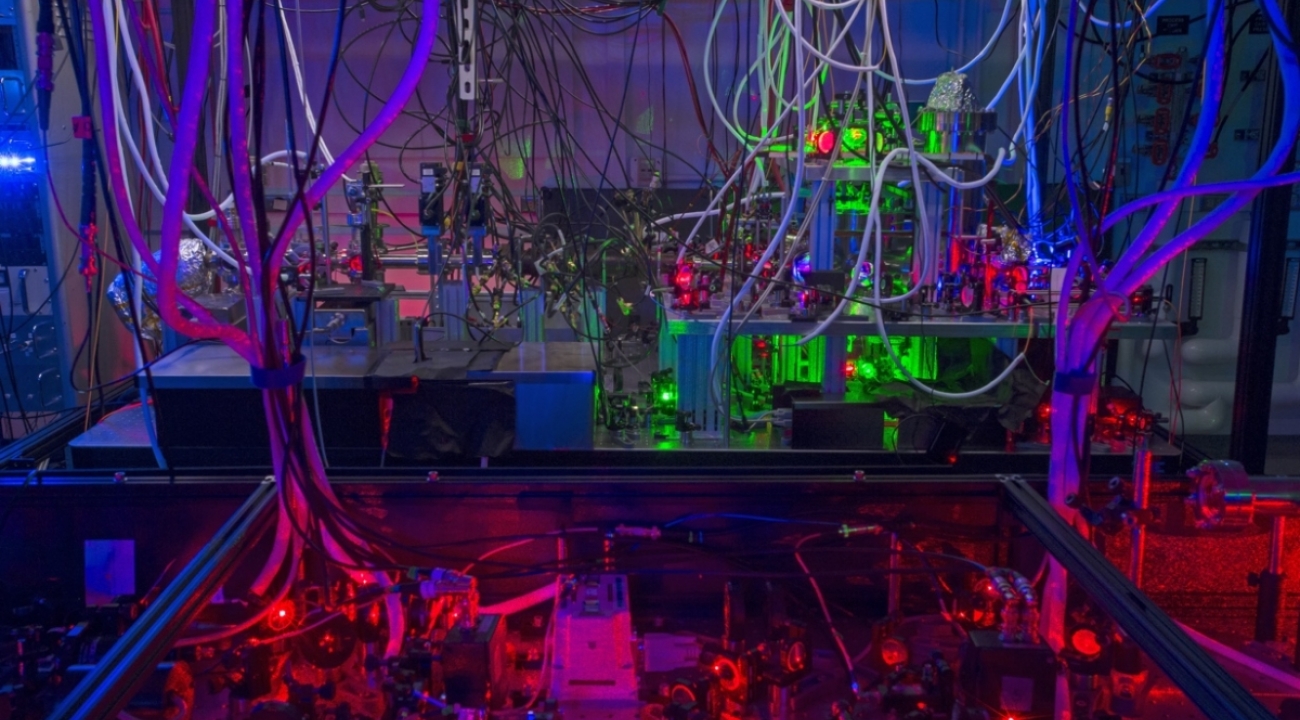 Equipment at the University of California, Santa Barbra for creating and manipulating quantum gases. It is being used to investigate the dynamical localization of interacting atoms, which is related to new work by JQI researchers. (Credit: Tony Mastres, UCSB)

Until now, dynamical localization has only been observed for single quantum objects, which has prevented it from contributing to attempts to pin down where the changeover occurs. To explore this issue, Rylands, together with Prof. Victor Galitski and other colleagues, investigated mathematical models to see if dynamical localization can still arise when many quantum particles interact. To reveal the physics, they had to craft models to account for various temperatures, interaction strengths and lengths of times. The team’s results, published in Physical Review Letters, suggest that dynamical localization can occur even when strong interactions are part of the picture.

“This result is an example of where a single quantum particle behaves completely differently from a classical particle, and then even with the addition of strong interactions the behavior still resembles that of the quantum particle rather than the classical,” says Rylands, who is the first author of the article.

The result extends dynamical localization beyond its single-particle origins, into the regime of many interacting particles. But in order to visualize the effect, it’s still useful to start with a single particle. Often, that single particle is discussed in terms of a rotor, which you can picture as a playground merry-go-round (or anything else that spins in a circle). The energy of a rotor (and its temperature) is directly related to how fast it is spinning. And a rotor with a steady supply of energy—one that is given a regular “kick”—is a convenient way of visualizing the differences in the flow of energy in quantum and classical physics.

For example, imagine Hercules tirelessly swiping at a merry-go-round. Most of his swipes will speed it up, but occasionally a swipe will land poorly and slow it down. Under these (imaginary) conditions, a normal merry-go-round would spin faster and faster, building up more and more energy until vibrations finally shake the whole thing apart. This represents how a normal rotor, in theory, can heat up forever without hitting an energy limit.

In the quantum world, things go down differently. For a quantum merry-go-round each swipe doesn’t simply increase or decrease the speed. Instead, each swipe produces a quantum superposition over different speeds, representing the chance of finding the rotor spinning at different rates. It’s not until you make a measurement that a particular speed emerges from the quantum superposition caused by the preceding kicks.

Previous research, both theoretical and experimental, has shown that at first a quantum rotor doesn’t behave very differently from a normal rotor because of this distinction—on average a quantum merry-go-round will also have more energy after experiencing more kicks. But once a quantum rotor has been kicked enough, its speed tends to plateau. After a certain point, the persistent effort of our quantum Hercules fails to increase the quantum merry-go-round’s energy (on average).

This behavior is conceptually similar to another thermodynamics-defying quantum phenomenon called Anderson localization. Philip Anderson, one of the founders of condensed-matter physics, earned a Noble Prize for the discovery of the phenomenon. He and his colleagues explained how a quantum particle, like an electron, could become trapped despite many apparent opportunities to move. They explained that imperfections in the arrangement of atoms in a solid can lead to quantum interference among the paths available to a quantum particle, changing the likelihood of it taking each path. In Anderson localization, the chance of being on any path becomes almost zero, leaving the particle trapped in place.

Dynamical localization looks a lot like Anderson localization but instead of getting trapped at a particular position, a particle’s energy gets stuck. As a quantum object, a rotor’s energy and thus speed are restricted to a set of quantized values. These values form an abstract grid or lattice similar to the locations of atoms in a solid and can produce an interference among energy states similar to the interference among paths in physical space. The probabilities of the different possible energies, instead of the possible paths of a particle, interfere, and the energy and speed get stuck near a single value, despite ongoing kicks.

While Anderson localization provided researchers with a perspective to understand a single kicked quantum rotor, it left some ambiguity about what happens to many interacting rotors that can toss energy back and forth. A common expectation was that the extra interactions would allow normal heating by disrupting the quantum balance that limits the increase of energy.

Galitski and colleagues identified a one-dimensional system where they thought the expectation may not hold true. They chose an interacting one-dimensional Bose gas as their playground. In a Bose gas, particles zipping back and forth down a line play the part of the rotors spinning in place. The gas atoms follow the same basic principles as kicked rotors but are more practical to work with in a lab. In labs, lasers can be used to contain the gas and also to cool the atoms in the gas down to a low temperature, which is essential to ensuring a strong quantum behavior.

Once the team selected this playground, they explored mathematical models of the many interacting gas atoms. Exploring the gas at a variety of temperatures, interaction strengths and number of kicks required the team to switch between several different mathematical techniques to get a full picture. In the end their results combined to suggest that when a gas with strong interactions starts near zero temperature it can experience dynamical localization. The team named this phenomenon “many-body dynamical localization.”

"These results have important implications and fundamentally demonstrate our incomplete understanding of these systems," says Robert Konik, a coauthor of the paper and physicist at Brookhaven National Lab. "They also contain the seed of possible applications because systems that do not accept energy should be less sensitive to quantum decoherence effects and so might be useful for making quantum computers."

Of course, a theoretical explanation is only half the puzzle; experimental confirmation is essential to knowing if a theory is on solid ground. Fortunately, an experiment on the opposite coast of the U.S. has been pursuing the same topic. Conversations with Galitski inspired David Weld, an associate physics professor at the University of California, Santa Barbra, to use his team’s experimental expertise to probe many-body dynamical localization.

“Usually it's not easy to convince an experimentalist to do an experiment based on theory,” says Galitski. “This case was kind of serendipitous, that David already had almost everything ready to go.”

Weld’s team is using a quantum gas of lithium atoms that is confined by lasers to create an experiment similar to the theoretical model Galitski’s team developed. (The main difference is that in the experiment the atoms move in three dimensions instead of just one.)

In the experiment, Weld and his team kick the atoms hundreds of times using laser pulses and repeatedly observe their fate. For different runs of the experiment they tuned the interaction strength of the atoms to different values.

“It's nice because we can go to a noninteracting regime quite perfectly, and that's something that it's pretty easy to calculate the behavior of,” says Weld. “And then we can continuously turn up the interaction and move into a regime that's more like what Victor and his coworkers are talking about in this latest paper. And we do observe localization, even in the presence of the strongest interactions that we can add to the system. That's been a surprise to me.”

Their preliminary results confirm the prediction that many-body dynamical localization can occur even when strong interactions are part of the picture. This opens new opportunities for researchers to try to pin down the boundary between the quantum and classical world.

“It's nice to be able to show something that people didn't expect and also for it to be experimentally relevant,” says Rylands.

In addition to Rylands, Galitski and Konik, former JQI graduate student Efim Rozenbaum, who is now a consultant with Boston Consulting Group, was also a co-author of the paper.