A Frankenstein of Order and Chaos

Normally the word “chaos” evokes a lack of order: a hectic day, a teenager’s bedroom, tax season. And the physical understanding of chaos is not far off. It’s something that is extremely difficult to predict, like the weather. Chaos allows a small blip (the flutter of a butterfly wing) to grow into a big consequence (a typhoon halfway across the world), which explains why weather forecasts more than a few days into the future can be unreliable. Individual air molecules, which are constantly bouncing around, are also chaotic—it’s nearly impossible to pin down where any single molecule might be at any given moment.

Now, you might wonder why anyone would care about the precise location of a single air molecule. But you might care about a property shared by a whole bunch of molecules, such as their temperature. Perhaps unintuitively, it is the chaotic nature of the molecules that allows them to fill up a room and reach a single temperature. The individual chaos ultimately gives rise to collective order.

Being able to use a single number (the temperature) to describe a bunch of particles bouncing around in some crazy, unpredictable way is extremely convenient, but it doesn’t always happen. So, a team of theoretical physicists at JQI set out to understand when this description applies. 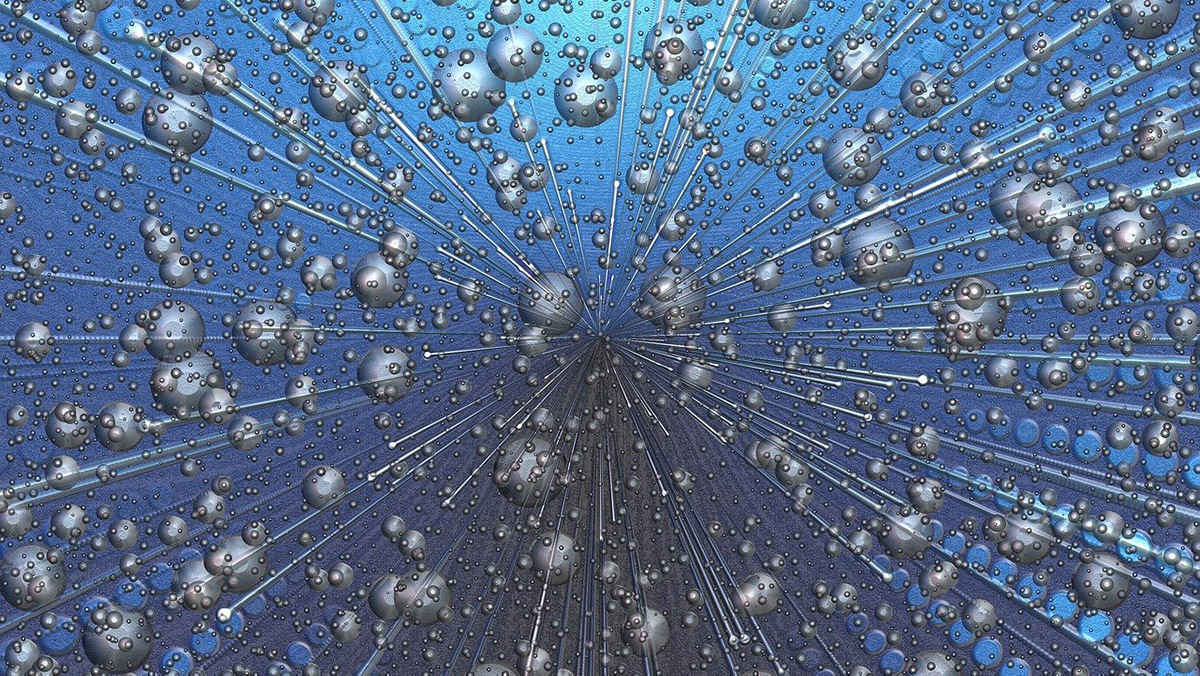 Researchers at JQI have discovered a quantum system that is a hybrid of order and chaos. (Credit: geralt/Pixabay)

"The ambitious goal here is to understand how chaos and the universal tendency of most physical systems to reach thermal equilibrium arises from fundamental laws of physics," says Victor Galitski, a Fellow of the Joint Quantum Institute (JQI).

As a first step towards this ambitious goal, Galitski and two colleagues set out to understand what happens when many particles, each of which is chaotic on its own, get together. For example, the motion of a single puck in an air hockey game, bouncing uninterrupted off the walls, is chaotic. But what happens when a lot of these pucks are let loose onto the table? And furthermore, what would happen if the pucks obey the rules of quantum physics?

In a paper published recently in the journal Physical Review Letters(link is external), the team studied this air hockey problem in the quantum realm. They discovered that the quantum version of the problem (where pucks are really quantum particles like atoms or electrons) was neither ordered nor chaotic, but a little bit of both, according to one common way of measuring chaos. Their theory was general enough to describe a range of physical settings, including molecules in a container, a game of quantum air hockey, and electrons bouncing around in a disordered metal, such as copper wire in your laptop.

“We always thought it was a problem that’s been solved a long time ago in some textbook,” says Yunxiang Liao, a JQI postdoc and the first author on the paper. “It turns out it's a more difficult problem than we imagined, but the results are also more interesting than we imagined.”

One reason this problem has remained unsolved for so long is that once quantum mechanics enters the picture, the usual definitions of chaos don’t apply. Classically, the butterfly effect—tiny changes in initial conditions causing drastic changes down the line—is often used as a definition. But in quantum mechanics, the very notion of initial or final position doesn’t quite make sense. The uncertainty principle says that the position and speed of a quantum particle can’t be precisely known at the same time. So, the particle’s trajectory isn’t very well defined, making it impossible to track how different initial conditions lead to different outcomes.

One tactic for studying quantum chaos is to take something classically chaotic, like a puck bouncing around an air hockey table, and treat it quantum mechanically. Surely, the classical chaos should translate over. And indeed, it does. But when you put more than one quantum puck in, things become less clear.

Classically, if the pucks can bounce off each other, exchanging energy, they will eventually all reach a single temperature, exposing the collective order of the underlying chaos. But if the pucks don’t bump into each other, and instead pass through each other like ghosts, their energies will never change: the hot ones will stay hot, the cold ones will stay cold, and they’ll never reach the same temperature. Since the pucks don’t interact, collective order can’t emerge from the chaos.

The team took this game of ghost air hockey into the quantum mechanical realm expecting the same behavior—chaos for one quantum particle, but no collective order when there are many. To check this hunch, they picked one of the oldest and most widely used (albeit not the most intuitive) tests of quantum chaos.

Quantum particles can’t just have any energy, the available levels are ‘quantized,’ which basically means they are restricted to particular values. Back in the 1970’s, physicists found that if the quantum particles behaved in predictable ways, their energy levels were completely independent of one another—the possible values didn’t tend to bunch up or spread out, on average. But if the quantum particles were chaotic, the energy levels seemed to avoid each other, spreading out in distinctive ways. This energy level repulsion is now often used as one of the definitions of quantum chaos.

Since their hockey pucks didn’t interact, Liao and her collaborators weren’t expecting them to agree on a temperature, meaning that they wouldn’t see any indications of the underlying single-puck chaos. The energy levels, they thought, would not care about each other at all.

Not only did they find theoretical evidence of some level repulsion, a hallmark of quantum chaos, but they also found that some of the levels tended to bunch together rather than repel, a novel phenomenon that they couldn’t quite explain. This deceptively simple problem turned out to be neither ordered nor chaotic, but some curious combination of the two that hadn’t been seen before.

The team was able to uncover this hybrid using an innovative mathematical approach. “In previous numerical studies, researchers were only able to include 20 or 30 particles,” says Liao. “But using our mathematical approach from random matrix theory, we could include 500 or so. And this approach also allows us to calculate the analytic behavior for a very large system.”

Armed with this mathematical framework, and with piqued interest, the researchers are now extending their calculations to gradually allow the hockey pucks to interact little by little. "Our preliminary results indicate that thermalization may happen via spontaneous breaking of reversibility—the past becomes mathematically distinct from the future,” says Galitski. “We see that small disturbances get exponentially magnified and destroy all remaining signatures of order. But this is another story."

In addition to Liao and Galitski, Amit Vikram, a JQI graduate student in physics at UMD, was an author on the paper.