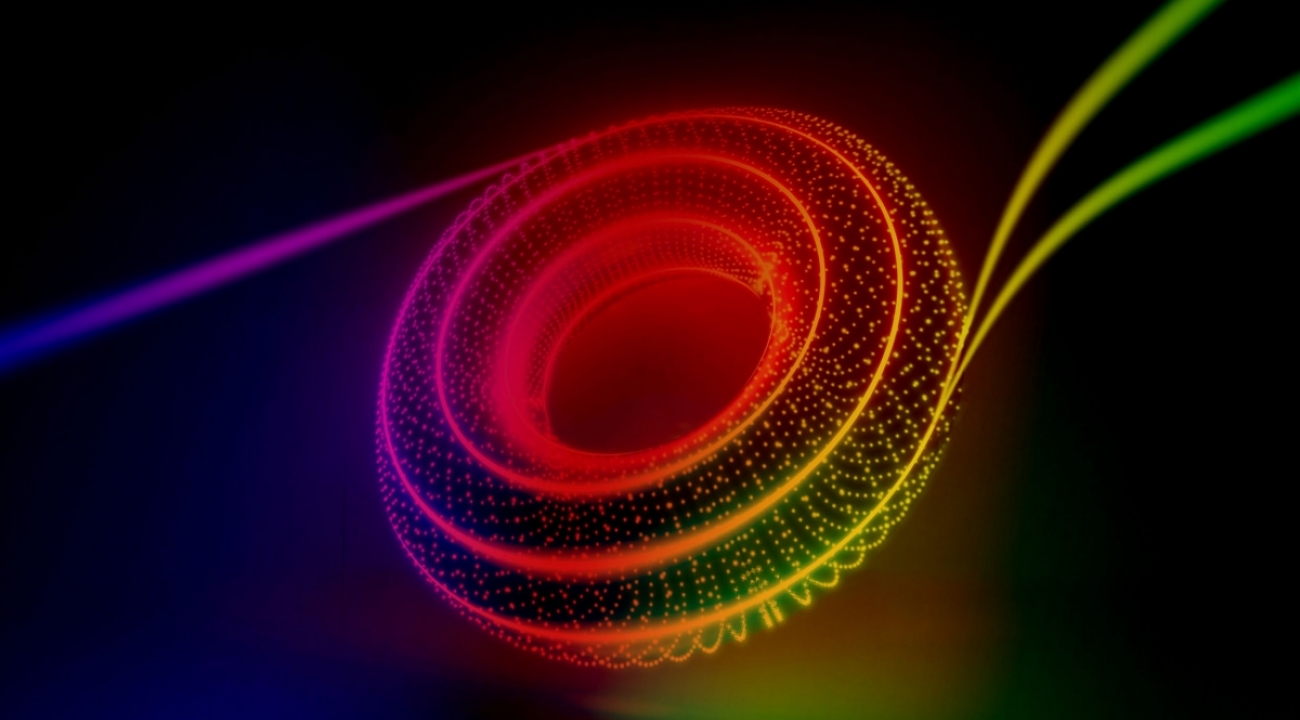 While generating a crowd of photons—particles of light—is as easy as flipping a light switch, it’s trickier to make a pair of indistinguishable photons. And it takes yet more work to endow that pair with a quantum mechanical link known as entanglement. In a paper published May 10, 2021 in the journal Nature Photonics(link is external), JQI researchers and their colleagues describe a new way to make entangled twin particles of light and to tune their properties using a method conveniently housed on a chip, a potential boon for quantum technologies that require a reliable source of well-tailored photon pairs.

The researchers, led by JQI fellow Mohammad Hafezi, designed the method to harness the advantages of topological physics. Topological physics explores previously untapped physical phenomena using the mathematical field of topology, which describes common traits shared by different shapes. (Where geometry concerns angles and sizes, topology is more about holes and punctures—all-encompassing characteristics that don’t depend on local details.) Researchers have made several major discoveries by applying this approach, which describes how quantum particles—like electrons or, in this case, photons—can move in a particular material or device by analyzing its broad characteristics through the lens of topological features that correspond to abstract shapes (such as the donut in the image above). The topological phenomena that have been revealed are directly tied to the general nature of the material; they must exist even in the presence of material impurities that would upset the smooth movement of photons or electrons in most other circumstances.

Their new method builds on previous work, including the generation of a series of distinguishable photon pairs. In both the new and old experiments, the team created a checkerboard of rings on a silicon chip. Each ring is a resonator that acts like a tiny race track designed to keep certain photons traveling round and round for a long time. But since individual photons in a resonator live by quantum rules, the racecars (photons) can sometimes just pass unchanged through an intervening wall and proceed to speed along a neighboring track.

“It's exactly the same mathematics that applies to electrons and photons,” says Sunil Mittal, a JQI postdoctoral researcher and the first author of the paper. “So you get more or less all the same topological features. All the mathematics that you do with electrons, you can simply carry to photonic systems.”

In the current work, they recreated an electronic phenomenon called the anomalous quantum Hall effect that opens up paths for electrons on the edge of a material. These edge paths, which are called topological edge states, exist because of topological effects, and they can reliably transport electrons while leaving routes through the interior easily disrupted and impassable. Achieving this particular topological effect requires that localized magnetic fields push on electrons and that the total magnetic field when averaged over larger sections of the material cancels out to zero.

But photons lack the electrical charge that makes electrons susceptible to magnetic shoves, so the team had to recreate the magnetic push in some other way. To achieve this, they laid out the tracks so that it is easier for the photons to quantum mechanically jump between rings in certain directions. This simulates the missing magnetic influence and creates an environment with a photonic version of the anomalous quantum Hall effect and its stable edge paths.

For this experiment, the team sent two laser beams of two different colors (frequencies) of light into this carefully designed environment. Inside a resonator, a photon from each of the beams spontaneously combine. The researchers then observed how the photons reformed into two indistinguishable photons, travelled through the topological edge paths and were eventually ejected from the chip.

Since the new photons formed inside a resonator ring, they took on the traits (polarization and spatial mode) of the photons that the resonators are designed to hold. The only trait left that the team needed to worry about was their frequencies.

The researchers matched the frequencies of the photons by selecting the appropriate input frequencies for the two lasers based on how they would combine inside the silicon resonators. With the appropriate theoretical understanding of the experiment, they can produce photons that are quantum mechanically indistinguishable.

The nature of the formation of the new photons provides the desired quantum characteristics. The photons are quantum mechanically entangled due to the way they were generated as pairs; their combined properties—like the total energy of the pair—are constrained by what the original photons brought into the mix, so observing the property of one instantly reveals the equivalent fact about the other. Until they are observed—that is, detected by the researchers—they don’t exist as two individual particles with distinct quantum states for their frequencies. Rather, they are identical mixtures of possible frequency states called a superposition. The two photons being indistinguishable means they can quantum mechanically interfere with each other

The resulting combination of being indistinguishable and entangled is essential for many potential uses of photons in quantum technologies. An additional lucky side effect of the researcher’s topological approach is that it gives them a greater ability to adjust the frequencies of the twin photons based on the frequencies they pump into the chip and how well the frequencies match with the topological states on the edge of the device.

“This is not the only way to generate entangled photon pairs—there are many other devices—but they are not tunable,” Mittal says. “So once you fabricate your device, it is what it is. If you want to change the bandwidth of the photons or do something else, it's not possible. But in our case, we don't have to design a new device. We showed that, just by tuning the pump frequencies, we could tune the interference properties. So, that was very exciting.”

The combination of the devices being tunable and robust against manufacturing imperfections make them an appealing option for practical applications, the authors say. The team plans to continue exploring the potential of this technique and related topological devices and possible ways to further improve the devices such as using other materials to make them.

In addition to Hafezi and Mittal, former JQI graduate student Venkata Vikram Orre and former JQI postdoctoral researcher and current assistant professor at the University of Illinois Urbana-Champaign Elizabeth Goldschmidt were also co-authors of the paper.

Research Contact: Mohammad Hafezi This email address is being protected from spambots. You need JavaScript enabled to view it.