Pobody’s nerfect—not even the indifferent, calculating bits that are the foundation of computers. But College Park Professor Christopher Monroe’s group, together with colleagues from Duke University, have made progress toward ensuring we can trust the results of quantum computers(link is external) even when they are built from pieces that sometimes fail. They have shown in an experiment, for the first time, that an assembly of quantum computing pieces can be better than the worst parts used to make it. In a paper published in the journal Nature(link is external) on Oct. 4, 2021, the team shared how they took this landmark step toward reliable, practical quantum computers.

In their experiment, the researchers combined several qubits—the quantum version of bits—so that they functioned together as a single unit called a logical qubit. They created the logical qubit based on a quantum error correction code so that, unlike for the individual physical qubits, errors can be easily detected and corrected, and they made it to be fault-tolerant—capable of containing errors to minimize their negative effects.

“Qubits composed of identical atomic ions are natively very clean by themselves,” says Monroe, who is also a Fellow of the Joint Quantum Institute and the Joint Center for Quantum Information and Computer Science. “However, at some point, when many qubits and operations are required, errors must be reduced further, and it is simpler to add more qubits and encode information differently. The beauty of error correction codes for atomic ions is they can be very efficient and can be flexibly switched on through software controls.”

This is the first time that a logical qubit has been shown to be more reliable than the most error-prone step required to make it. The team was able to successfully put the logical qubit into its starting state and measure it 99.4% of the time, despite relying on six quantum operations that are individually expected to work only about 98.9% of the time. 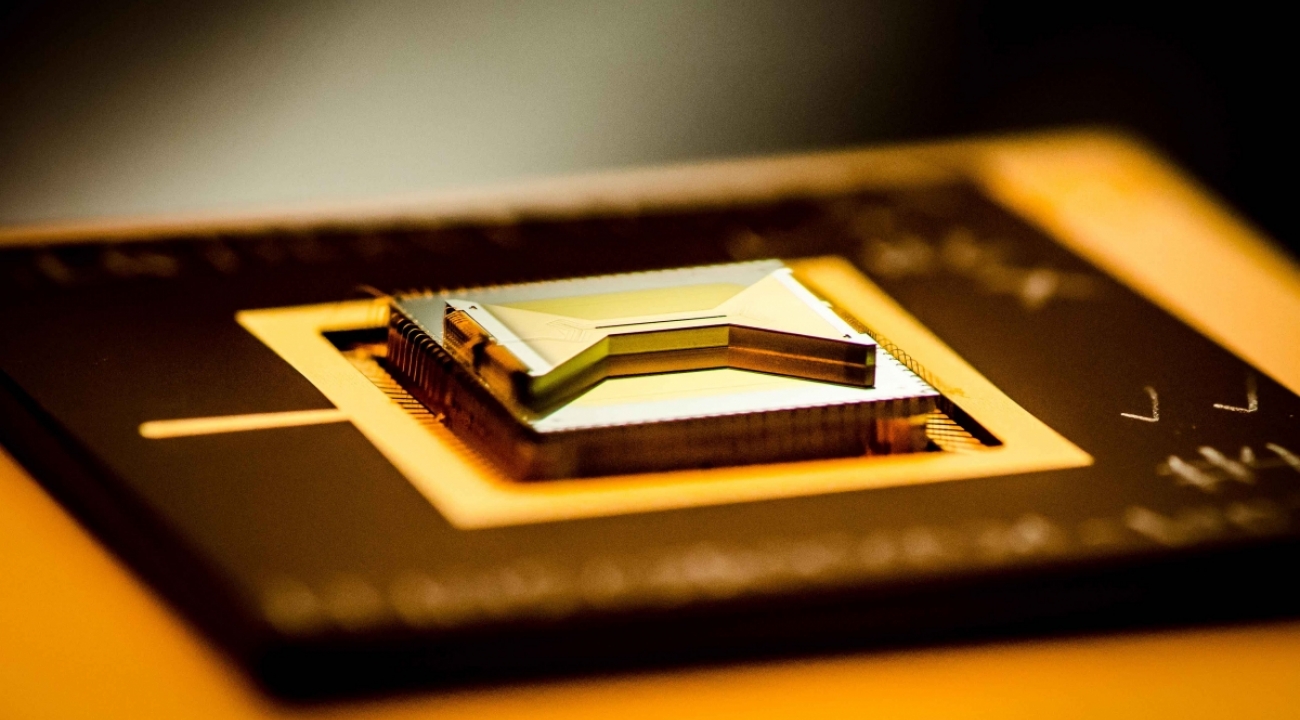 That might not sound like a big difference, but it’s a crucial step in the quest to build much larger quantum computers. If the six quantum operations were assembly line workers, each focused on one task, the assembly line would only produce the correct initial state 93.6% of the time (98.9% multiplied by itself six times)—roughly ten times worse than the error measured in the experiment. That improvement is because in the experiment the imperfect pieces work together to minimize the chance of quantum errors compounding and ruining the result, similar to watchful workers catching each other's mistakes.

The results were achieved using Monroe’s ion-trap system at UMD, which uses up to 32 individual charged atoms—ions—that are cooled with lasers and suspended over electrodes on a chip. They then use each ion as a qubit by manipulating it with lasers.

“We have 32 laser beams,” says Monroe. “And the atoms are like ducks in a row; each with its own fully controllable laser beam. I think of it like the atoms form a linear string and we're plucking it like a guitar string. We're plucking it with lasers that we turn on and off in a programmable way. And that's the computer; that's our central processing unit.”

By successfully creating a fault-tolerant logical qubit with this system, the researchers have shown that careful, creative designs have the potential to unshackle quantum computing from the constraint of the inevitable errors of the current state of the art. Fault-tolerant logical qubits are a way to circumvent the errors in modern qubits and could be the foundation of quantum computers that are both reliable and large enough for practical uses.

Developing fault-tolerant qubits capable of error correction is important because Murphy’s law is relentless: No matter how well you build a machine, something eventually goes wrong. In a computer, any bit or qubit has some chance of occasionally failing at its job. And the many qubits involved in a practical quantum computer mean there are many opportunities for errors to creep in.

Fortunately, engineers can design a computer so that its pieces work together to catch errors—like keeping important information backed up to an extra hard drive or having a second person read your important email to catch typos before you send it. Both the people or the drives have to mess up for a mistake to survive. While it takes more work to finish the task, the redundancy helps ensure the final quality.

Some prevalent technologies, like cell phones and high-speed modems, currently use error correction to help ensure the quality of transmissions and avoid other inconveniences. Error correction using simple redundancy can decrease the chance of an uncaught error as long as your procedure isn’t wrong more often than it’s right—for example, sending or storing data in triplicate and trusting the majority vote can drop the chance of an error from one in a hundred to less than one in a thousand.

So while perfection may never be in reach, error correction can make a computer’s performance as good as required, as long as you can afford the price of using extra resources. Researchers plan to use quantum error correction to similarly complement their efforts to make better qubits and allow them to build quantum computers without having to conquer all the errors that quantum devices suffer from.

“What's amazing about fault tolerance, is it's a recipe for how to take small unreliable parts and turn them into a very reliable device,” says Kenneth Brown, a professor of electrical and computer engineering at Duke and a coauthor on the paper. “And fault-tolerant quantum error correction will enable us to make very reliable quantum computers from faulty quantum parts.”

But quantum error correction has unique challenges—qubits are more complex than traditional bits and can go wrong in more ways. You can’t just copy a qubit, or even simply check its value in the middle of a calculation. The whole reason qubits are advantageous is that they can exist in a quantum superposition of multiple states and can become quantum mechanically entangled with each other. To copy a qubit you have to know exactly what information it’s currently storing—in physical terms you have to measure it. And a measurement puts it into a single well-defined quantum state, destroying any superposition or entanglement that the quantum calculation is built on.

So for quantum error correction, you must correct mistakes in bits that you aren’t allowed to copy or even look at too closely. It’s like proofreading while blindfolded. In the mid-1990s, researchers started proposing ways to do this using the subtleties of quantum mechanics, but quantum computers are just reaching the point where they can put the theories to the test.

The key idea is to make a logical qubit out of redundant physical qubits in a way that can check if the qubits agree on certain quantum mechanical facts without ever knowing the state of any of them individually.

Can’t Improve on the Atom

The ion trap-based quantum computer that Monroe and colleagues work with has the advantage that their individual qubits are identical and very stable. Since the qubits are electrically charged ions, each qubit can communicate with all the others in the line through electrical nudges, giving freedom compared to systems that need a solid connection to immediate neighbors.

“They’re atoms of a particular element and isotope so they're perfectly replicable,” says Monroe. “And when you store coherence in the qubits and you leave them alone, it exists essentially forever. So the qubit when left alone is perfect. To make use of that qubit, we have to poke it with lasers, we have to do things to it, we have to hold on to the atom with electrodes in a vacuum chamber, all of those technical things have noise on them, and they can affect the qubit.”

For Monroe’s system, the biggest source of errors is entangling operations—the creation of quantum links between two qubits with laser pulses. Entangling operations are necessary parts of operating a quantum computer and of combining qubits into logical qubits. So while the team can’t hope to make their logical qubits store information more stably than the individual ion qubits, correcting the errors that occur when entangling qubits is a vital improvement.

The researchers selected the Bacon-Shor code as a good match for the advantages and weaknesses of their system. For this project, they only needed 15 of the 32 ions that their system can support, and two of the ions were not used as qubits but were only needed to get an even spacing between the other ions. For the code, they used nine qubits to redundantly encode a single logical qubit and four additional qubits to pick out locations where potential errors occurred. With that information, the detected faulty qubits can, in theory, be corrected without the “quantum-ness” of the qubits being compromised by measuring the state of any individual qubit.

“The key part of quantum error correction is redundancy, which is why we needed nine qubits in order to get one logical qubit,” says Laird Egan (PhD, '21), who is the first author of the paper. “But that redundancy helps us look for errors and correct them, because an error on a single qubit can be protected by the other eight.”

The team successfully used the Bacon-Shor code with the ion-trap system. The resulting logical qubit required six entangling operations—each with an expected error rate between 0.7% and 1.5%. But thanks to the careful design of the code, these errors don't combine into an even higher error rate when the entanglement operations were used to prepare the logical qubit in its initial state.

The team only observed an error in the qubit's preparation and measurement 0.6% of the time—less than the lowest error expected for any of the individual entangling operations. The team was then able to move the logical qubit to a second state with an error of just 0.3%. The team also intentionally introduced errors and demonstrated that they could detect them.

As the team continues this line of work, they say they hope to achieve similar success in building even more challenging quantum logical gates out of their qubits, performing complete cycles of error correction where the detected errors are actively corrected, and entangling multiple logical qubits together.

“Up until this paper, everyone's been focused on making one logical qubit,” says Egan. “And now that we’ve made one, we're like, ‘Single logical qubits work, so what can you do with two?’”