One of the mind-bending ideas that physicists and mathematicians have come up with is that space itself—not just objects in space—can be curved. When space curves (as happens dramatically near a black hole), sizes and directions defy normal intuition. Something as straightforward as defining a straight line requires careful consideration.

Understanding curved spaces is important to expanding our knowledge of the universe, but it is fiendishly difficult to study curved spaces in a lab setting (even using simulations). A previous collaboration between researchers at JQI explored using labyrinthine circuits made of superconducting resonators to simulate the physics of certain curved spaces (see the previous story for additional background information and motivation of this line of research). In particular, the team looked at hyperbolic lattices that represent spaces—called negatively curved spaces(link is external)—that have more space than can fit in our everyday “flat” space. Our three-dimensional world doesn’t even have enough space for a two-dimensional negatively curved space.

Now, in a paper published in the journal Physical Review Letters(link is external) on Jan. 3, 2022, the same collaboration between the groups of Alicia Kollár and Alexey Gorshkov expands the potential applications of the technique to include simulating more intricate physics. They’ve laid a theoretical framework for adding qubits—the basic building blocks of quantum computers—to serve as matter in a curved space made of a circuit full of flowing microwaves. Specifically, they considered the addition of qubits that change between two quantum states when they absorb or release a microwave photon—an individual quantum particle of the microwaves that course through the circuit. 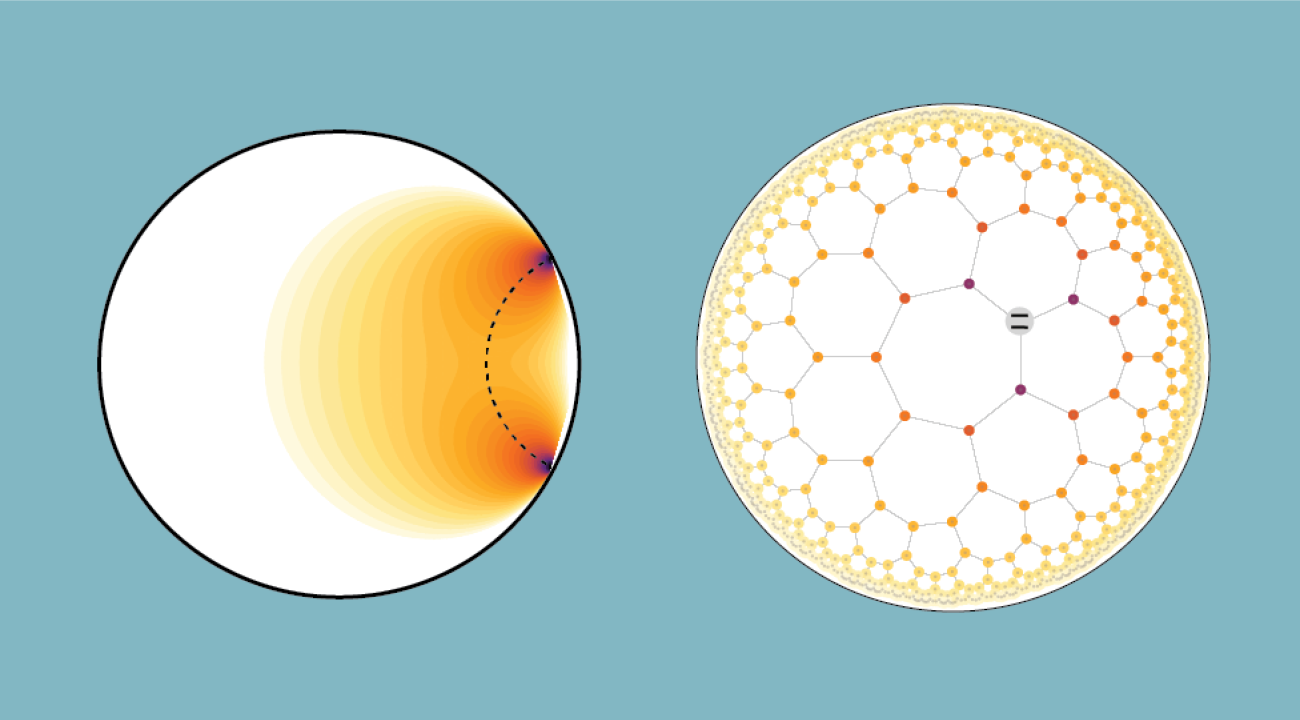 (Left image) Microwave photons that create an interaction between pairs of qubits (black dots on the edge) in a hyperbolic space are most likely to travel along the shortest path (dotted line). In both images, the darker colors show where photons are more likely to be found. (Right image) A quantum state formed by a qubit (grey dot containing parallel black lines) and an attached microwave photon that can be found at one of the intersections of the grid representing a curved space. (Credit: Przemyslaw Bienias/JQI)

“This is a new frontier in tabletop experiments studying effects of curvature on physical phenomena,” says first author Przemyslaw Bienias, a former Joint Quantum Institute (JQI) assistant research scientist who is now working for Amazon Web Services as a Quantum Research Scientist. “Here we have a system where this curvature is huge and it's very exciting to see how it influences the physics.”

For researchers to use these simulations they need a detailed understanding of how the simulations represent a curved space and even more importantly under what situations the simulation fails. In particular, the edges that must exist on the physical circuits used in the simulations must be carefully considered since scientists are often interested in an edgeless, infinite curved space. This is especially important for hyperbolic lattices because they have nearly the same number of sites on the edge of the lattice as inside. So the team identified situations where the circuits should reflect the reality of an infinite curved space despite the circuit’s edge and situations where future researchers will have to interpret results carefully.

The team found that certain properties, like how likely a qubit is to release a photon, shouldn’t be dramatically impacted by the circuit’s edge. But other aspects of the physics, like the proportion of states that photons occupy at a given shared total energy, will be strongly influenced by the edge.

With proper care, this type of simulation will provide a peek into how negatively curved spaces are a foundation for an entirely new world of physics.

“In this paper, we asked the question, ‘What happens when you add qubits to the photons living on those hyperbolic lattices?’” Bienias says. “We are asking, ‘What type of physics emerges there and what type of interactions are possible?’”

The researchers first looked at how the microwaves and a single qubit in the circuit can combine. The team predicts that the size of special quantum states in which a photon is attached to a particular qubit—a bound state—will be limited by the curved space in a way that doesn’t happen in flat space. The right-side image above shows such a state with the darker coloring showing where the photon is most likely to be found around the qubit represented by the grey dot.

They then investigated what happens when there are multiple qubits added to a circuit full of microwaves. The photons traveling between qubits serve as intermediaries and allow the qubits to interact. The team’s analysis suggests that the photons that are causing qubits to interact tend to travel along the shortest path between the two points in the circuit—corresponding to the shortest distance in the simulated curved space. One of these paths through the curved space is shown in the left-side image above. This result matches physicists’ current expectations of such a space and is a promising sign that the simulations will reveal useful results in more complex situations.

Additionally, the researchers predict that the curvature will limit the range of the interactions between qubits similar to the way it limits the size of the individual bound states. Simulations using this setup could allow scientists to explore the behaviors of many particles interacting in a curved space, which is impractical to study using brute numerical calculation.

These results build upon the previous research and provide additional tools for exploring new physics using superconducting circuits to simulate curved space. The inclusion of interactions explored in this paper could aid in using the simulations to investigate the topic called AdS/CFT correspondence that combines theories of quantum gravity and quantum field theories.

“Hyperbolic connectivity is immensely useful in classical computation, underlying, for example, some of the most efficient classical error correcting codes in use today,” Kollár says. “We now know that adding qubits to a hyperbolic resonator lattice will endow the qubits’ interactions with hyperbolic structure, rather than the native flat curvature of the lab. This opens the door to allow us to carry out direct experiments to examine the effect of hyperbolic connectivity on quantum bits and quantum information.”

In addition to Kollár, Gorshkov and Bienias, other co-authors of the paper were Ron Belyansky, a JQI physics graduate student, and Igor Boettcher, a former JQI postdoctoral researcher and current assistant professor at the University of Alberta.