Phases are integral to how we define our world. We navigate through the phases of our lives, from child to teenager to adult, chaperoned along the way by our changing traits and behaviors. Nature, too, undergoes phase changes. Lakes can freeze for the winter, thaw in the spring and lose water to evaporation in the dog days of summer. It’s useful to capture and study the differences that accompany these dramatic shifts.

In physics, phases of matter play a key role, and there are more phases than just the familiar solid, liquid and gas. Physicists have built a modest taxonomy of the different phases that matter can inhabit, and they’ve explored the alchemy of how one phase can be converted into another. Now, scientists are discovering new ways to conjure up uniquely quantum phases that may be foundational to quantum computers and other quantum tech of the future.

“There's a whole world here,” says Associate Professor Maissam Barkeshli, a  Fellow of the Joint Quantum Institute and a member of the Condensed Matter Theory Center. “There’s a whole zoo of phases that we could study by having competing processes in random quantum circuits.” 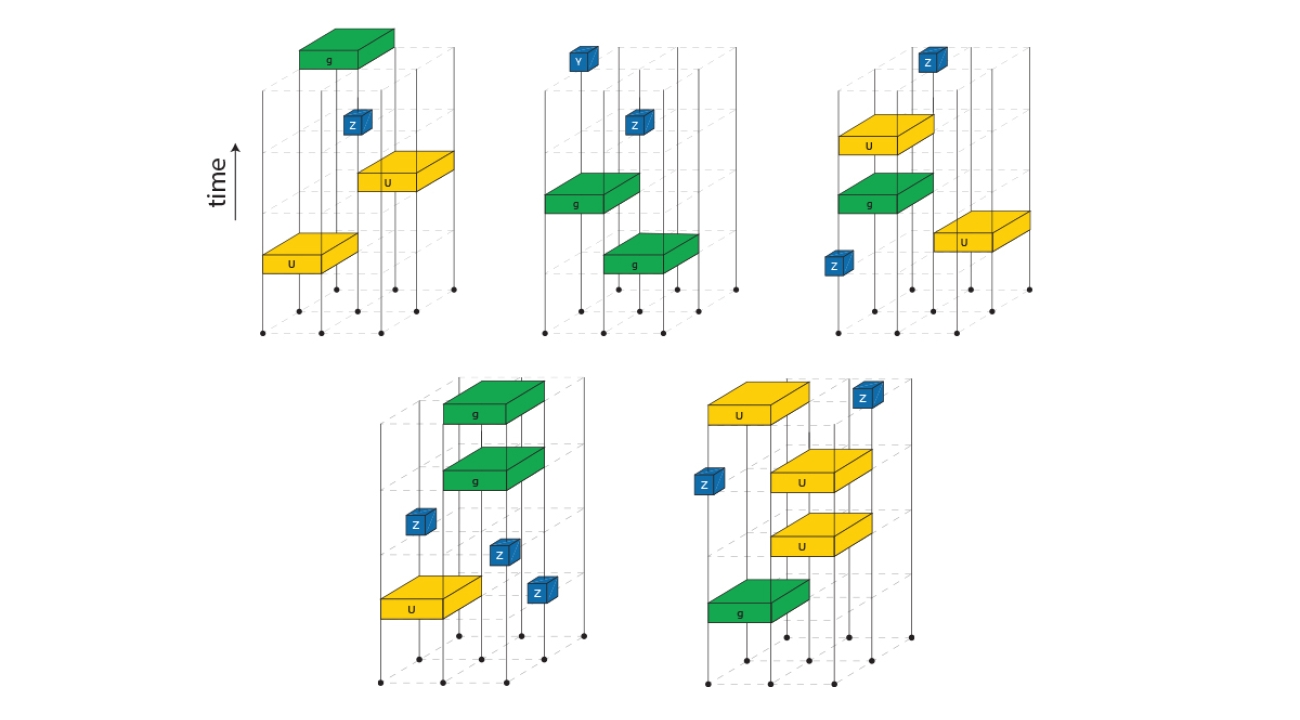 In new numerical experiments, quantum particles (black dots), which travel upward through time, are subject to random quantum processes (blue, green and yellow blocks). Depending on the likelihood of the different kinds of processes, the quantum particles ultimately end up in different entanglement phases. This figure shows five examples of randomly chosen processes acting on a small number of particles. (Credit: A. Lavasani/JQI)

Often when physicists study phases of matter they examine how a solid slab of metal or a cloud of gas changes as it gets hotter or colder. Sometimes the changes are routine—we’ve all boiled water to cook pasta and frozen it to chill our drinks. Other times the transformations are astonishing, like when certain metals get cold enough to become superconductors(link is external) or a gas heats up and breaks apart into a glowing plasma soup(link is external).

However, changing the temperature is only one way to transmute matter into different phases. Scientists also blast samples with strong electric or magnetic fields or place them in special chambers and dial up the pressure. In these experiments, researchers are hunting for a stark transition in a material’s behavior or a change in the way its atoms are organized.

In a new paper published recently in the journal Physical Review Letters(link is external), Barkeshli and two colleagues continued this tradition of exploring how materials respond to their environment. But instead of looking for changes in conductivity or molecular structure, they focused on changes in a uniquely quantum property: entanglement, or the degree to which quantum particles give up their individuality and become correlated with each other. The amount of entanglement and the distinct way that it spreads out among a group of particles defines different entanglement phases.

The researchers used UMD’s supercomputers to conduct numerical experiments and study the entanglement phases of a grid of quantum particles. They studied which entanglement phase the particles end up in when subjected to a tug-of-war between three competing quantum processes. One process performs a quantum measurement on an individual particle, forcing it to choose between one of two states and removing some entanglement from the grid. Another process, which the researchers were the first to include, is also a quantum measurement, but instead of measuring a single particle it measures four neighboring particles at a time. This, too, removes some entanglement, but it can also spread entanglement in a controlled way. The final process twists and spins the particles around, like what happens when a magnet influences a compass needle. This tends to inject more entanglement into the grid.

The researchers began their numerical experiments by preparing all the particles in the same way. Then, they randomly selected both a process and which cluster of particles it was applied to. After many rounds of random applications, they ceased their prodding and calculated the topological entanglement entropy. Over many runs, the researchers also varied the likelihood of selecting the different processes, tuning how often each of the processes gets applied relative to the others. By performing these experiments many times, the researchers constructed a phase diagram—basically a map of how much entanglement is left after many rounds of random quantum nudges.

The results add to an emerging body of work that studies the effects of applying random quantum processes—including a paper published in Nature Physics earlier this year(link is external) by the same team—but the inclusion of the four-particle measurements in the new result produced a richer picture. In addition to some expected features, like three distinct entanglement phases corresponding to the three processes, the researchers found a couple of surprises.

In particular, they found that entanglement spread widely throughout the system using only the two quantum measurement processes, even though neither process would produce that phase on its own. They may have even spotted a stable phase perched between the phase created by the single-particle measurements alone and the phase created by the four-particle measurements alone, an unlikely phenomenon akin to balancing something on the edge of a knife.

But besides creating the phase diagram itself, the authors say that their technique supplies a new way to prepare phases that are already well known. For instance, the phase created by the four-particle measurements is key to quantum error correcting codes and topological quantum computation. One way of preparing this phase would require making the four-particle measurements, interpreting the results of those measurements, and feeding that information back into the quantum computer by performing additional highly controlled quantum procedures. To prepare the same phase with the new technique, the same four-particle measurements still must be made, but they can be done in a random fashion, with other quantum processes interspersed, and there is no need to interpret the results of the measurements—a potential boon for researchers looking to build quantum devices.

“It is a kind of shortcut in the sense that it's a way of realizing something interesting without needing as much control as you thought you needed,” Barkeshli says.

"Our work shows that the peculiar nature of measurements in quantum mechanics could be leveraged into realizing exotic non-equilibrium phases of matter,” says Ali Lavasani, a graduate student in the UMD Department of Physics and the first author of the new paper. “Moreover, this technique might also lead to novel non-equilibrium phases of matter which do not have any counterpart in equilibrium settings, just like driven systems give rise to time crystals that are forbidden in equilibrium systems.”