There is nothing permanent except change. This is perhaps never truer than in the fickle and fluctuating world of quantum mechanics.

The quantum world is in constant flux. The properties of quantum particles flit between discrete, quantized states without any possibility of ever being found in an intermediate state. How quantum states change defies normal intuition and remains the topic of active debate—for both scientists and philosophers.

For instance, scientists can design a quantum experiment where they find a particle’s spin—a quantum property that behaves like a magnet—pointing either up or down. No matter how often they perform the experiment they never find the spin pointing in a direction in between. Quantum mechanics is good at describing the probability of finding one or the other state and describing the state as a mix of the two when not being observed, but what actually happens between observations is ambiguous. 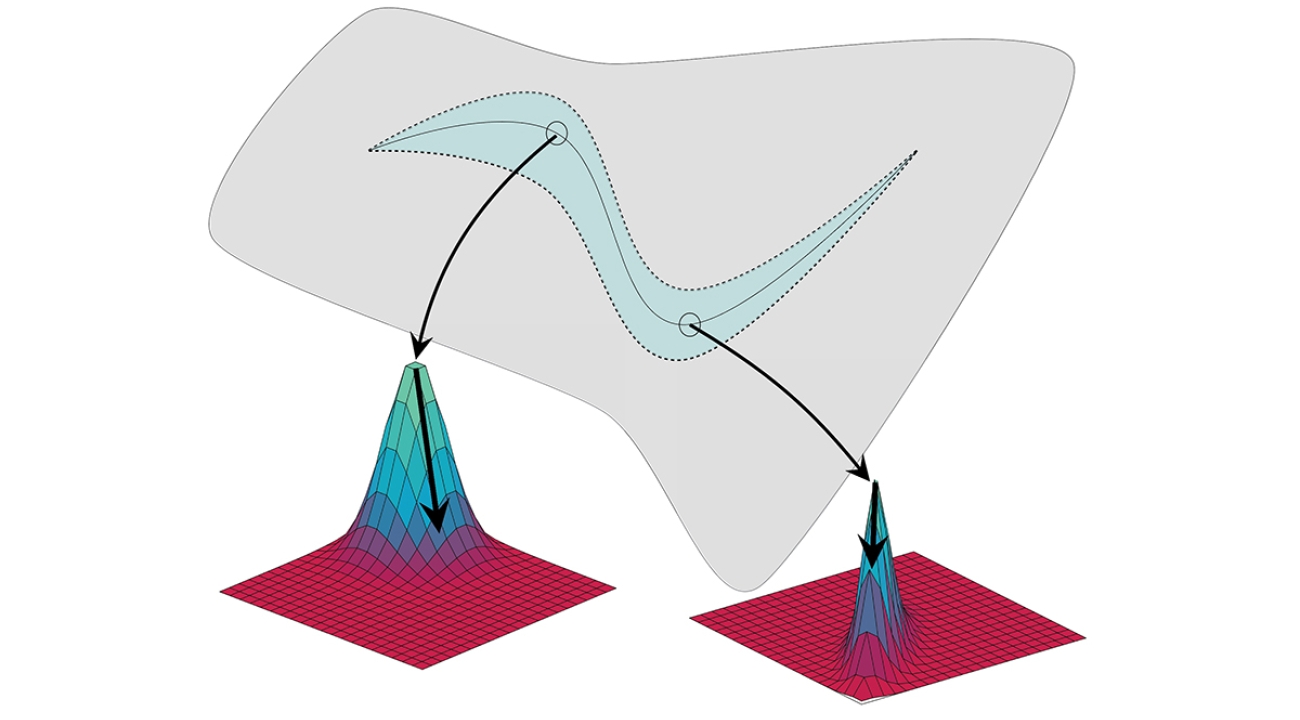 In the figure, a path winds through an abstract landscape of possible quantum states (gray sheet). At each point along the journey, a quantum measurement could yield many different outcomes (colorful distributions below the sheet). A new theory places strict limits on how quickly (and how slowly) the result of a quantum measurement can change over time depending on the various circumstances of the experiment. For instance, how precisely researchers initially know the value of a measurement affects how quickly the value can change—a less precise value (the wider distribution on the left) can change more quickly (represented by the longer arrow pointing away from its peak) than a more certain value (the narrower peak on the right). Credit: Schuyler Nicholson

This ambiguity extends to looking at interacting quantum particles as a group and even to explaining how our everyday world can result from these microscopic quantum foundations. The rules governing things like billiards balls and the temperature of a gas look very different from the quantum rules governing things like electron collisions and the energy absorbed or released by a single atom. And there is no known sharp, defining line between these two radically different domains of physical laws. Quantum changes are foundational to our universe and understanding them is becoming increasingly important for practical applications of quantum technologies.

In a paper(link is external) published Feb. 28, 2022 in the journal Physical Review X, Adjunct Assistant Professor Alexey Gorshkov, Assistant Research Scientist Luis Pedro García-Pintos and their colleagues provide a new perspective for investigating quantum changes. They developed a mathematical description that sorts quantum behaviors in a system into two distinct parts. One piece of their description looks like the behavior of a quantum system that isn’t interacting with anything, and the second piece looks like the familiar behavior of a classical system. Using this perspective, the researchers identified limits on how quickly quantum systems can evolve based on their general features, and they better describe how those changes relate to changes in non-quantum situations.

“Large quantum systems cannot in general be simulated on classical computers,” says Gorshkov, who is a Fellow of the Joint Quantum Institute (JQI)  and the Joint Center for Quantum Information and Computer Science (QuICS). “Therefore, understanding something important about how these systems behave—such as our insights into the speed of quantum changes—is always exciting and bound to have applications in quantum technologies.”

There is a long history of researchers investigating quantum changes, with most of the research focused on transitions between quantum states. These states contain all the information about a given quantum system. But two distinct states can be as different as can be mathematically despite being extremely similar in practice. This means the state approach often offers a perspective that's too granular to generate useful experimental insights.

In this new research, the team instead focused on an approach that is more widely applicable in experiments. They didn’t focus on changes of quantum states themselves but rather on observables—the results of quantum measurements, which are what scientists and quantum computer users can actually observe. Observables can be any number of things, such as the momentum of a particle, the total magnetization of a collection of particles or the charge of a quantum battery(link is external) (a promising but still theoretical quantum technology). The researchers also chose to investigate quantum behaviors that are influenced by the outside world—a practical inevitability.

The team looked at general features of a possible quantum system, like how well known its energy is and how precisely the value they want to look at is known beforehand. They used these features to derive mathematical rules about how fast an observable can change for the given conditions.

“The spirit of the whole approach is not to go into the details of what the system may be,” says García-Pintos, who is also a QuICS postdoctoral researcher and is the lead author on the paper. “The approach is completely general. So once you have it, you can ask about a quantum battery, or anything you want, like how fast you're able to flip a qubit.”

This approach is possible because in quantum mechanics, two quantities can be intricately connected with strict mathematical rules about what you can know about them simultaneously (the most famous of these rules is the Heisenberg uncertainty principle for a quantum particle’s location and speed).

In addition to their new limits, they were able to reverse the process to show how to make a system that achieves a desired change quickly.

These new results build upon a previous work(link is external) from García-Pintos and colleagues. They studied classical changes such as how quickly energy and entropy can be exchanged between non-quantum systems. This previous result allowed the researchers to break up different behaviors into quantum-like and non-quantum-like descriptions. With this approach, they have a single theory that spans the extremes of possible outside influence—from enough interaction to allow no quantum behavior to the purely theoretical realms of quantum situations without any external influence.

“It's nice; it's elegant that we have this framework where you can include both of these extremes,” García-Pintos says. “One interesting thing is that when you combine these two bounds, we get something that is tighter, meaning better than the established bound.”

Having the two terms also allowed the researchers to describe the slowest speed at which a particular observable will change based on the details of the relevant situation. In essence, to find the slowest possible change they look at what happens when the two types of effects are completely working against each other. This is the first time that a lower bound has been put on observables in this way.

In the future, these results might provide insights into how to best design quantum computer programs or serve as a starting point for creating even more stringent limits on how quickly specific quantum situations can change.