Physicists sometimes come up with crazy stories that sound like science fiction. Some turn out to be true, like how the curvature of space and time described by Einstein was eventually borne out by astronomical measurements. Others linger on as mere possibilities or mathematical curiosities.

In a new paper in Physical Review Research(link is external), Victor Galitski and graduate student Alireza Parhizkar have explored the imaginative possibility that our reality is only one half of a pair of interacting worlds. Their mathematical model may provide a new perspective for looking at fundamental features of reality—including why our universe expands the way it does and how that relates to the most miniscule lengths allowed in quantum mechanics. These topics are crucial to understanding our universe and are part of one of the great mysteries of modern physics.

The pair of scientists stumbled upon this new perspective when they were looking into research on sheets of graphene—single atomic layers of carbon in a repeating hexagonal pattern. They realized that experiments on the electrical properties of stacked sheets of graphene produced results that looked like little universes and that the underlying phenomenon might generalize to other areas of physics. In stacks of graphene, new electrical behaviors arise from interactions between the individual sheets, so maybe unique physics could similarly emerge from interacting layers elsewhere—perhaps in cosmological theories about the entire universe. 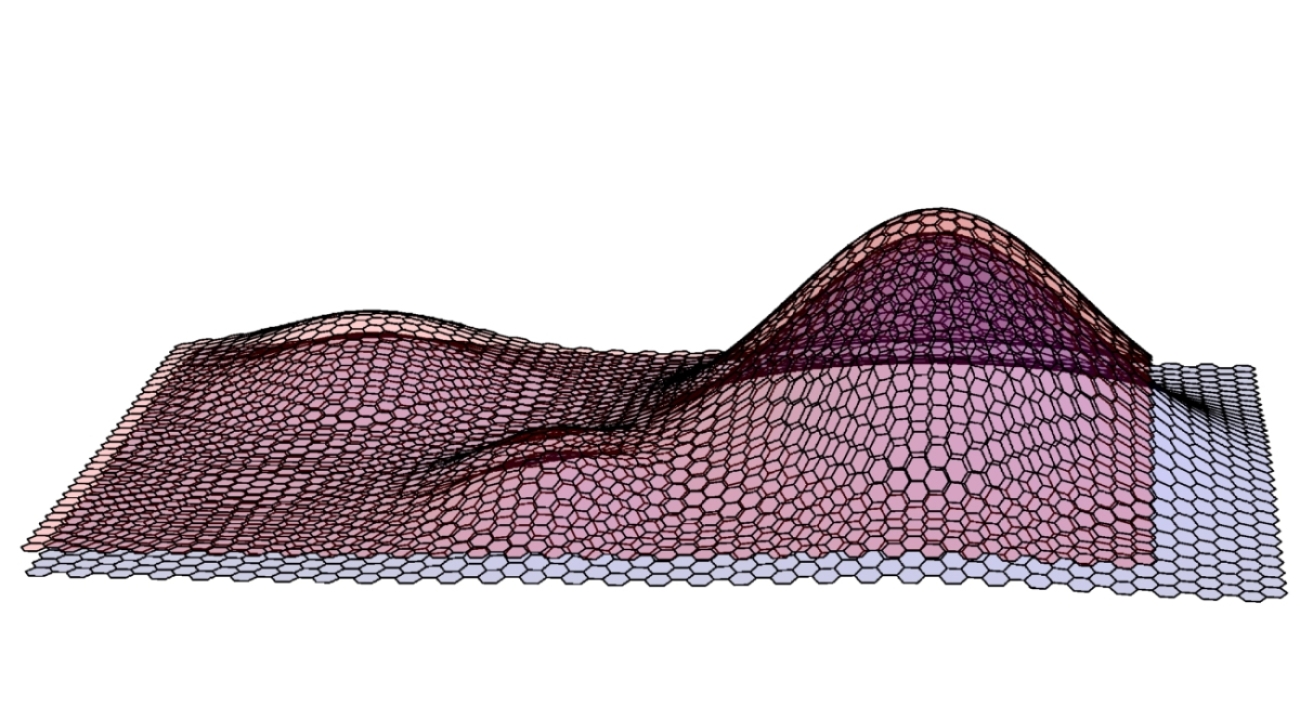 A curved and stretched sheet of graphene laying over another curved sheet creates a new pattern that impacts how electricity moves through the sheets. A new model suggests that similar physics might emerge if two adjacent universes are able to interact. (Credit: Alireza Parhizkar, JQI)

“We think this is an exciting and ambitious idea,” says Galitski, who is also a Fellow of the Joint Quantum Institute (JQI). “In a sense, it's almost suspicious that it works so well by naturally ‘predicting’ fundamental features of our universe such as inflation and the Higgs particle as we described in a follow up preprint(link is external).”

Stacked graphene’s exceptional electrical properties and possible connection to our reality having a twin comes from the special physics produced by patterns called moiré patterns. Moiré patterns form when two repeating patterns—anything from the hexagons of atoms in graphene sheets to the grids of window screens—overlap and one of the layers is twisted, offset, or stretched.

The patterns that emerge can repeat over lengths that are vast compared to the underlying patterns. In graphene stacks, the new patterns change the physics that plays out in the sheets, notably the electrons' behaviors. In the special case called “magic angle graphene,” the moiré pattern repeats over a length that is about 52 times longer than the pattern length of the individual sheets, and the energy level that governs the behaviors of the electrons drops precipitously, allowing new behaviors, including superconductivity.

Galitski and Parhizkar realized that the physics in two sheets of graphene could be reinterpreted as the physics of two two-dimensional universes where electrons occasionally hop between universes. This inspired the pair to generalize the math to apply to universes made of any number of dimensions, including our own four-dimensional one, and to explore if similar phenomenon resulting from moiré patterns might pop up in other areas of physics. This started a line of inquiry that brought them face to face with one of the major problems in cosmology.

“We discussed if we can observe moiré physics when two real universes coalesce into one,” Parhizkar says. “What do you want to look for when you're asking this question? First you have to know the length scale of each universe.”

A length scale—or a scale of a physical value generally—describes what level of accuracy is relevant to whatever you are looking at. If you’re approximating the size of an atom, then a ten-billionth of a meter matters, but that scale is useless if you’re measuring a football field because it is on a different scale. Physics theories put fundamental limits on some of the smallest and largest scales that make sense in our equations.

This constant is fundamental to our universe. So to determine its value, scientists, in theory, just need to look at the universe, measure several details, like how fast galaxies are moving away from each other, plug everything into the equations and calculate what the constant must be.

This straightforward plan hits a problem because our universe contains both relativistic and quantum effects. The effect of quantum fluctuations across the vast vacuum of space should influence behaviors even at cosmological scales. But when scientists try to combine the relativistic understanding of the universe given to us by Einstein with theories about the quantum vacuum, they run into problems.

One of those problems is that whenever researchers attempt to use observations to approximate the cosmological constant, the value they calculate is much smaller than they would expect based on other parts of the theory. More importantly, the value jumps around dramatically depending on how much detail they include in the approximation instead of homing in on a consistent value. This lingering challenge is known as the cosmological constant problem, or sometimes the “vacuum catastrophe.”

“This is the largest—by far the largest—inconsistency between measurement and what we can predict by theory,” Parhizkar says. “It means that something is wrong.”

Since moiré patterns can produce dramatic differences in scales, moiré effects seemed like a natural lens to view the problem through. Galitski and Parhizkar created a mathematical model (which they call moiré gravity) by taking two copies of Einstein’s theory of how the universe changes over time and introducing extra terms in the math that let the two copies interact. Instead of looking at the scales of energy and length in graphene, they were looking at the cosmological constants and lengths in universes.

Galitski says that this idea arose spontaneously when they were working on a seemingly unrelated project that is funded by the John Templeton Foundation(link is external) and is focused on studying hydrodynamic flows in graphene and other materials to simulate astrophysical phenomena.

In preliminary follow up work(link is external), Galitski and Parhizkar have started to build upon this new perspective by diving into a more detailed model of a pair of interacting worlds—that they dub “bi-worlds.” Each of these worlds is a complete world on its own by our normal standards, and each is filled with matching sets of all matter and fields. Since the math allowed it, they also included fields that simultaneously lived in both worlds, which they dubbed “amphibian fields.”

The new model produced additional results the researchers find intriguing. As they put together the math, they found that part of the model looked like important fields that are part of reality. The more detailed model still suggests that two worlds could explain a small cosmological constant and provides details about how such a bi-world might imprint a distinct signature on the cosmic background radiation—the light that lingers from the earliest times in the universe.

This signature could possibly be seen—or definitively not be seen—in real world measurements. So future experiments could determine if this unique perspective inspired by graphene deserves more attention or is merely an interesting novelty in the physicists’ toy bin.

“We haven't explored all the effects—that's a hard thing to do, but the theory is falsifiable experimentally, which is a good thing,” Parhizkar says. “If it's not falsified, then it's very interesting because it solves the cosmological constant problem while describing many other important parts of physics. I personally don't have my hopes up for that— I think it is actually too big to be true.”

The research was supported by the Templeton Foundation and the Simons Foundation.