The LHCb collaboration has presented a new test of the universality of the electroweak properties of leptons.

Nearly seven years of analysis of LHCb data by University of Maryland physicists Phoebe Hamilton and Hassan Jawahery and CERN collaborator Greg Ciezarek led to the results unveiled October 18, 2022 at a seminar at CERN and presented the next day at a flavor physics workshop at CERN. 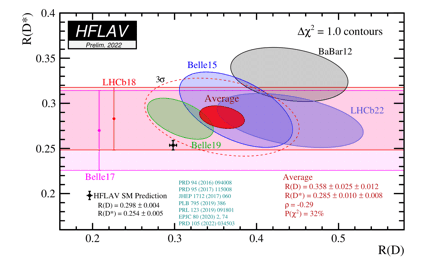 The results reflect analysis of seven years of data by Phoebe Hamilton and Hassan Jawahery and their CERN collaborator, Greg Ciezarek.

In 2015, the LHCb team reported on a test of lepton universality with the measurement of a key observable. But the new results represent the first simultaneous measurements of two correlated observables at the LHC collider, significantly improving the sensitivity to new physics effects. This is particularly important for the extensions of the Standard Model that contain additional Higgs bosons. The results are consistent with previous measurements, which hinted at deviation from lepton universality.  The combined values are at 3.2 standard deviation from the Standard Model.

These studies are a major theme of the physics program of the Maryland group in LHCb with the current and the future data with the upgraded detector. Over the past decade they have carried out a broad program of studies of lepton flavor universality in decays of particles containing the b quark, which have been published in PRL and highlighted in the CERN Courier and Symmetry magazine.  Professor Manuel Franco Sevilla, whose PhD thesis work at BaBar provided the first hint of deviation of these observables from universality, has recently co-authored a comprehensive review of the past studies and the prospects for future measurements in Review of Modern Physics.