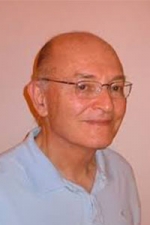 Edward Ott earned his bachelor's degree from Cooper Union in the field of electrical engineering. He received his master's and doctoral degrees in electrophysics from the Polytechnic Institute of Brooklyn. After a postdoctoral year at Cambridge University, he became a professor of electrical engineering at Cornell University. He joined the University of Maryland in 1979 and is a Distinguished University Professor in the Department of Electrical and Computer Engineering and the Department of Physics.

Professor Ott is a fellow of the American Physical Society, the Institute of Electrical and Electronics Engineers, and the Society for Industrial and Applied Mathematics (SIAM). He is the recipient of the APS Julius Edgar Lilienfield Prize for 2014.