Wolfgang Losert has been named interim director of the university’s Institute for Physical Science and Technology (IPST), effective July 1, 2019.

Losert will serve as interim director while the College of Computer, Mathematical, and Natural Sciences (CMNS) conducts a national search to find a replacement for Christopher Jarzynski, who recently completed his five-year term as director. In addition to his IPST role, Losert will continue to serve as CMNS associate dean for research while CMNS Associate Dean Gerald “Jerry” Wilkinson takes on Losert’s responsibilities for graduate education.

“I want to thank Wolfgang for agreeing to serve in this capacity while we search for a new director of IPST,” said CMNS Dean Amitabh Varshney. “IPST is an important institute in our college. The interdisciplinary research the faculty members and students in IPST pursue is extremely valuable—they are truly expanding our understanding of the world around us.

In his personal research, Losert aims to discover emergent dynamic properties of complex systems at the interface of physics and biology, with a focus on collective migration and activity of cells. He currently leads a $7.5 million Multidisciplinary University Research Initiative program funded by the Air Force Office of Scientific Research and serves as co-principal investigator on a $20 million Brain Research through Advancing Innovative Neurotechnologies (BRAIN) initiative center grant from the National Institutes of Health. Additional funding for Losert’s research comes from the National Science Foundation and the National Institute of Standards and Technology. He was elected fellow of the American Physical Society in 2017.

Within CMNS and the broader scientific community, Losert actively fosters cross-disciplinary interactions and new research and educational opportunities. He helped launch and currently co-leads the American Physical Society Group on Data Science. He is part of a trans-university initiative of the Howard Hughes Medical Institute (called NEXUS) that is developing new science and math courses for biology majors and pre-health care students that can serve as a national model. He helped initiate and co-directs the NCI-UMD Partnership for Integrative Cancer Research, which provides UMD faculty members and graduate students the opportunity to tackle pressing problems in cancer research in collaboration with National Cancer Institute experts.

During Jarzynski’s time as IPST director, he facilitated the recruitment of several faculty members to the institute: Cell Biology and Molecular Genetics Assistant Professor Daniel Dwyer, Mathematics Assistant Professor Lise-Marie Imbert-Gerard, Chemistry and Biochemistry Assistant Professor Pratyush Tiwary, and Mathematics Professor Konstantina Trivisa. Jarzynski also launched an interdisciplinary research team program in IPST to incubate new research fields. The first seed-funded team, led by Dwyer, is using microfluids to study antimicrobial resistance. The institute also advanced its leadership in the field of phase transitions in fluids and plasmas under Jarzynski by hosting U.S.-Russia workshops on the topic in 2016 and 2017.

Vladimir Manucharyan, who was promoted to the rank of Associate Professor, is an experimentalist researching solid state physics with a focus on fundamental aspects of superconductivity and quantum technology applications. He is a Fellow of the Joint Quantum Institute and a member of the Physics Frontier Center. While at UMD he has received a Sloan Research Fellowship, a DARPA Young Faculty Award, a National Science Foundation CAREER Award and a Google Faculty Research Award. He earned his Ph.D. at Yale University in 2012, researching quantum information with superconducting qubits, and was elected a Junior Fellow of the Harvard Society of Fellows for the term 2010-2013 before joining UMD in 2014.

Arpita Upadhyaya, who was promoted to the rank of Professor, is a biophysicist studying how physical properties of living cells are regulated to guide mechanical behaviors such as cell shape changes and force generation and how these guide physical regulation of cell function. Upadhyaya has received a Pappalardo Fellowship in Physics at the Massachusetts Institute of Technology, an Alfred P. Sloan Research Fellowship, and the Richard A. Ferrell Distinguished Faculty Fellowship from the UMD Department of Physics. She holds a doctorate from the University of Notre Dame, and in addition to her work at MIT, was a researcher at UNC Chapel Hill before joining the Department of Physics and the Institute for Physical Science and Technology (IPST) in 2006.

Jay Sau, who was promoted to the rank of Associate Professor, is a condensed matter theorist studying topological principles to create protected solid-state and cold-atomic systems for quantum information processing. He is a member of the Joint Quantum Institute and Condensed Matter Theory Center, and has won an Alfred P. Sloan Research Fellowship and a National Science Foundation CAREER Award. He also received the Richard A. Ferrell Distinguished Faculty Fellowship from the UMD Department of Physics. Sau holds a doctorate from the University of California at Berkeley, and held postdoctoral appointments at Berkeley, the University of Maryland and Harvard University before his appointment as a UMD Assistant Professor in 2013.

Alberto Belloni, who was promoted to the rank of Associate Professor, is an experimental particle physicist who works on the Compact Muon Solenoid (CMS) experiment at CERN’s Large Hadron Collider. He has held several posts within the collaboration, and in September 2018 became convener of the CMS Standard Model Physics Vector-Bosons subgroup of about 100 physicists, dedicated to inclusive electroweak boson studies. In August 2018 he received the Richard A. Ferrell Distinguished Faculty Fellowship from the UMD Department of Physics. Belloni holds a doctorate from the Massachusetts Institute of Technology, and was a post-doctoral associate and research associate at Harvard University before his appointment as a UMD Assistant Professor in 2013.

Robert Throckmorton was promoted to the rank of Assistant Research Scientist. He received his Ph.D. at Florida State University, and then accepted a postdoctoral position there, working at the National High Magnetic Field Laboratory. He joined the Condensed Matter Theory Center in 2013, and researches topics including semiconductor spin qubits, dynamical decoupling of decoherence and noise, interaction effects in graphene and strong correlations in three-dimensional Dirac-Weyl materials.
Przemysław Bienias was promoted to the rank of Assistant Research Scientist. After receiving his Ph.D. at the University of Stuttgart, he joined the Joint Quantum Institute  as a postdoctoral scholar. His research interests are at the intersection of quantum optics, molecular and atomic (AMO) physics, quantum information science, and condensed matter physics. 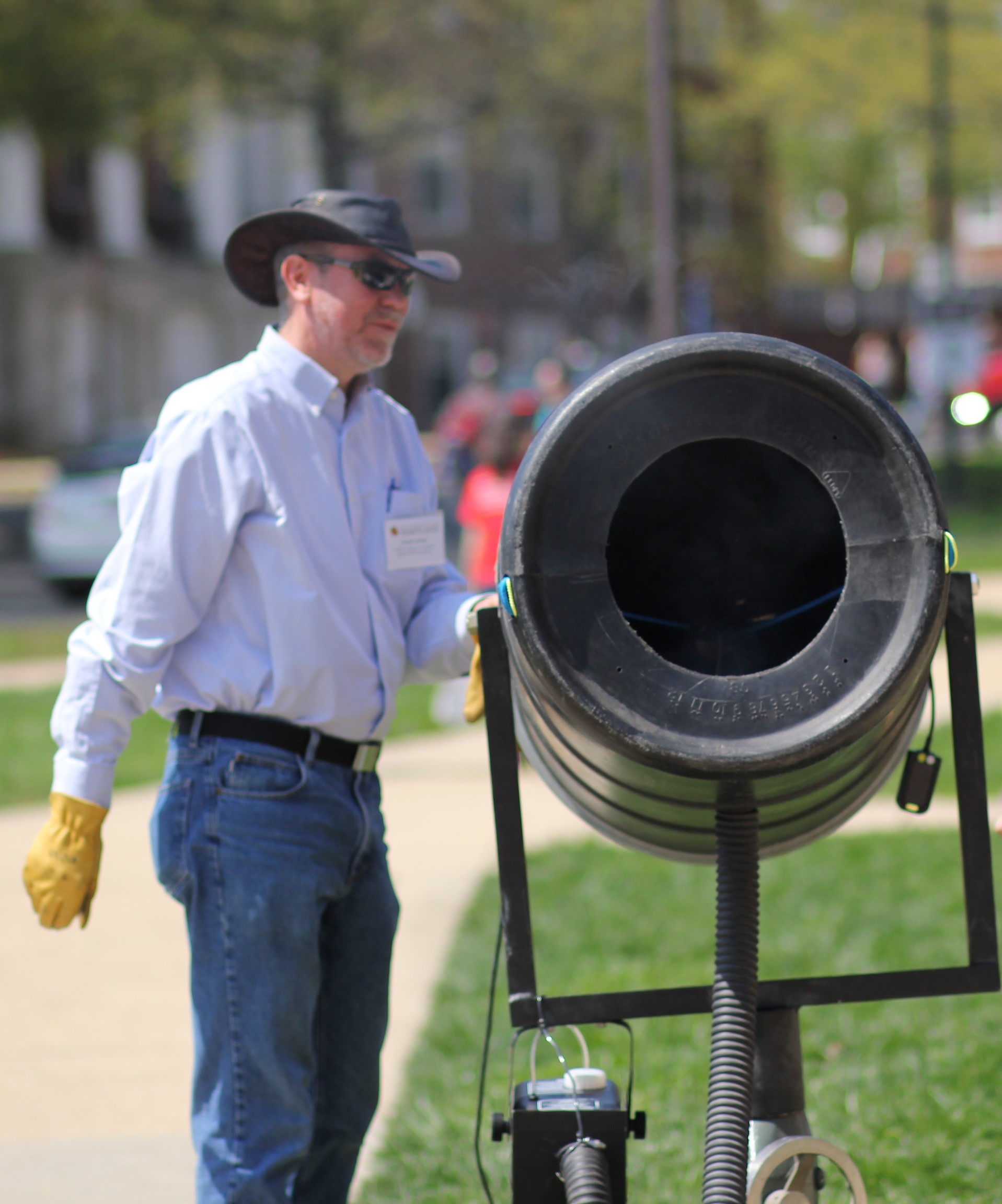 Professor Daniel Lathrop has been named a University of Maryland Distinguished Scholar-Teacher.  He will be recognized during the university’s annual Convocation ceremony on Wed., September 18 at 3 p.m. in the Memorial Chapel. A reception will follow in the Chapel Garden.

The Distinguished Scholar-Teacher Program, established in 1978, honors a small number of faculty members each year who have demonstrated notable success in both scholarship and teaching. Distinguished Scholar-Teachers receive an honorarium of $5,000 to support their professional activities, and make public presentations on a topic within their scholarly discipline. Lathrop will give his lecture on October 29 at 4 p.m. in the PSC lobby.

An interdisciplinary researcher with additional joint appointments in UMD’s Department of Geology, Institute for Research in Electronics and Applied Physics, and Institute for Physical Science and Technology, Lathrop studies turbulence—the chaotic motion of fluids such as air or water. Understanding turbulence is crucial to studying phenomena such as the flow of air over an airplane wing, water flowing down a drain or the behavior of Earth’s molten outer core.

Lathrop is particularly interested in Earth’s core, which generates a magnetic field that shields Earth from the sun’s radiation, allowing life to exist. Geological records show that the Earth’s magnetic field has reversed polarity numerous times in the past. When it does so, the magnetic field weakens, leaving the planet unprotected. However, scientists do not understand how Earth’s magnetic field is generated and what causes it to reverse. To investigate this question, Lathrop constructed a 3-meter spinning sphere filled with molten liquid sodium to model Earth’s core.

In addition to his research career, Lathrop is an enthusiastic mentor. Since joining UMD in 1997, he has mentored nine postdoctoral scholars, 19 Ph.D. students, 10 M.S. students, and more than 60 undergraduate and high school students.

“It is rare—and wonderful—to find a teacher and mentor as fully engaged and enthusiastic as is Professor Lathrop,” wrote Steven Rolston, professor and chair of the UMD Department of Physics, in a letter nominating Lathrop for the award. “He provides not only scientific knowledge but his deep-down love of the lab and of learning.”

Distinguished Scholar Teachers in the Department of Physics

The European Physical Society has announced that the DØ and CDF collaborations will receive the 2019 High Energy and Particle Physics Prize for "the discovery of the top quark and the detailed measurement of its properties".

In 1973, Makoto Kobayashi and Toshihide Maskawa predicted a top and bottom quark to explain CP violation. Four years later, Leon Lederman’s team at Fermilab discovered the bottom quark. But because of the complexity required to find the massive, short-lived (5x10-25 second) top quark, nearly two decades ensued before its confirmation at Fermilab’s Tevatron proton-antiproton collider, home to both DØ and CDF. The Tevatron was the world’s most powerful accelerator before the Large Hadron Collider at CERN opened in 2009.

UMD physicists played important roles in the top quark discovery. In the DØ collaboration, Nick Hadley was co-convenor of the Top Group at the time of detection. Sarah Eno’s precise measurement of the decay width and mass of the electroweak W boson helped predict the mass of the top quark.  Drew Baden devised an analysis technique, called HT, which allowed the experiment to separate the top quark signal for the much more numerous background events. Before coming to Maryland, Greg Sullivan was physics co-convener of the dilepton group for the CDF collaboration, and Kara Hoffman was also a member of the CDF collaboration.

“The top quark remains one of nature’s most interesting particles. It has the mass of a gold atom, but behaves like an elementary particle with a volume at least a billion times smaller than a proton,” said Hadley.

The EPS prize will be formally awarded at the EPS Conference on July 15 in Ghent. 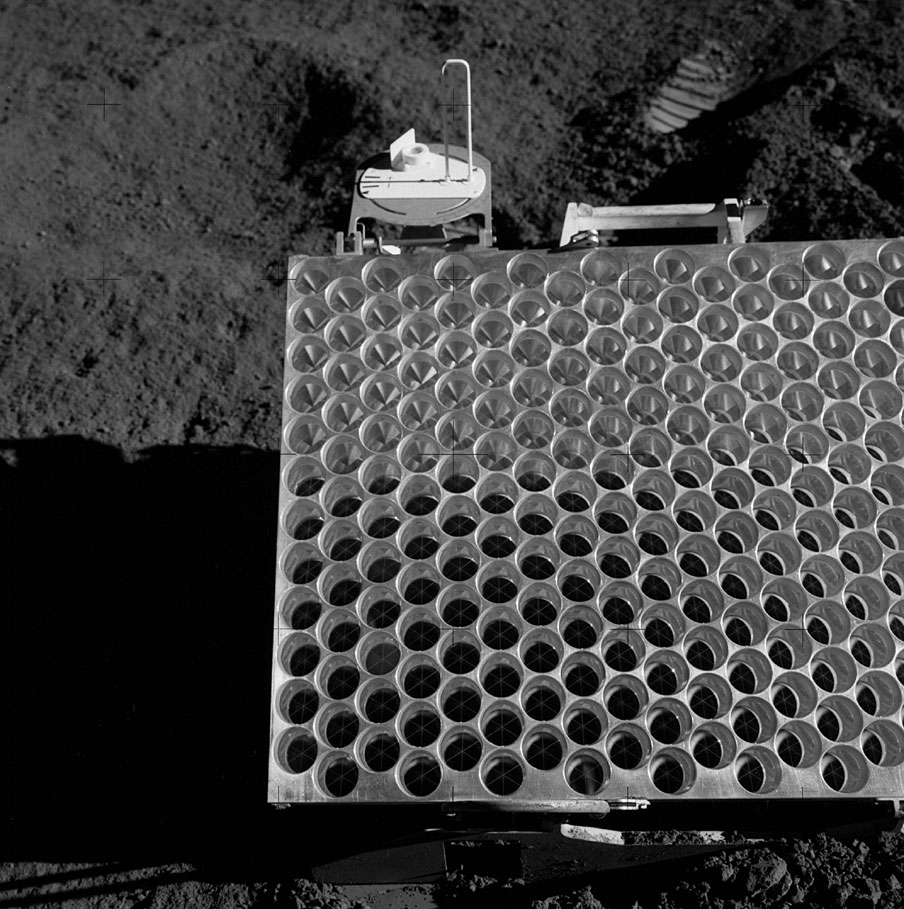 A portion of the Apollo 15 lunar laser ranging retroreflector array, as placed on the Moon and photographed by D. Scott. Credits: NASA/D. Scott

In an Eos article titled, "Seeing the Light," UMD Physics Research Scientist and Professor Emeritus Doug Currie describes the current retroreflectors installed on the Moon and his proposal to send a new module as part of an upcoming lunar mission. The article details how retroreflectors installed on the Moon during the Apollo 11, 14 and 15 missions are still used today, but that improvements are needed.